Today I saw the snowy owl that my son has been telling me that he sees on his drive to his highschool. This is only the second time I have ever seen a snowy owl, up close and personal and it thrills me beyond belief! I absolutely love birds of prey. I get pretty excited just seeing a hawk in a dead tree or on a hydro pole. But a snowy owl?? Bliss.


Getting a picture was a bit difficult. The sky was a whitish grey, it was snowing a bit, and the owl is white, so there wasn't much distinction. Add to that, I was using my phone to take the picture out my vehicle window. I was so happy that the owl did not fly away while I was stopped on the road trying to take its picture. 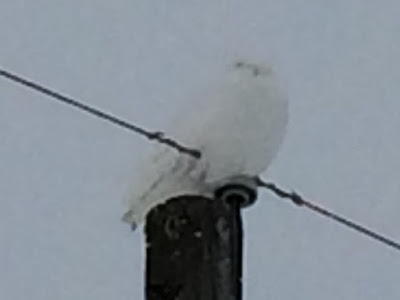 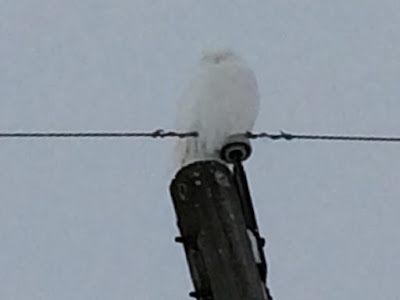 These pictures were enlarged on my phone. It is a male snowy owl because there are no bars in its colouration. Snowy owls are different from others in that they hunt during daylight hours. They are native to Canada.


I think this fellow had his eyes closed most of the time. It is difficult to see how big he is, but he was impressive. I got some good news today about a little health scare today, and I will take his appearance as a "good omen" (even though I'm not really into omens and things). Do you have owls where you live?
Posted by coffeeontheporchwithme at 2/27/2019 05:37:00 pm