I felt that this month flew by. It was good, weather wise, in the first half of the month, and then we got enough rain to last us the entire fall later in the month. I did two stints of supply teaching - one of them was actually in my old classroom with the kids I taught last year. It was so nice to see them!

Husband has been very busy with the pool house (a big raised pergola-type structure) doing cement work and creating kind of Chippendale sections below the rails. The pool is now officially closed for the season (but we really hadn't been in it for weeks - too cold). Husband does all that with a little help from me.

I got the latest Louise Penny novel from the library on a 14 day hold (because it's brand new and in high demand). No worries though because I finished it in a day. It is called The Madness of Crowds and she did put some "Covid" into it, in that the novel is set post-pandemic and looks back a bit, but that is not the main focus of the book, which is good in my opinion. It was very thought provoking and a bit uncomfortable at times, but I always see that as a mark of a good writer.

I have emptied all of my outdoor pots and planters. I am going to try to save my canna lily tubers (bulbs?) for next year. Any suggestions on the best way to do that would be appreciated, otherwise I'm going to let them dry out and shake off excess soil and wrap them in newspaper and put them in the crisper of our second fridge (beer fridge as most Canadians refer to them).

I have been writing down books that people have mentioned in their blogs for their "fall reading" and I'm about to go on the library's website to see if I can order any of them. Thanks to all for your suggestions.

Murphy recently had his surgery to be neutered (or to calm the hell down, as Scooter may think of it) and he came out of it with flying colours. The vet tech said he should be kept inside and calm for two weeks. I thought, "not likely!" and we managed to keep him in for two days until he and us could take it no longer. He's fine. I'm still waiting for him to calm down and stop being a pain in the neck for Scooter.

Really, nothing terribly exciting is going on, but I thought I should prove I'm still alive. Here's looking forward to a good October.

Thanks to everyone who takes the time to read my little blog and then leave comments. I’m always shocked that people actually do! I’ve been trying to respond, but the Blogger gremlins seem to have different ideas. I’ll try again tomorrow and see if the bugs have been worked out! 🙂

Learn to make tomato pie, as it's a great recipe to use up tomatoes at this time of year. Any tomatoes will do, but if you have some that have dropped from the vine or have a bit of soft spot to cut off, this is perfect because they are all hidden in the pie anyway. I'll include the actual recipe at the end.

Full disclosure: I still make it a bit too sloppy, but I'm getting better. Perhaps you can learn from my mistakes.

To start you need a standard pie crust. I make it easy on myself sometimes and use a frozen pie crust, so make sure it is thawed, which doesn't take long. 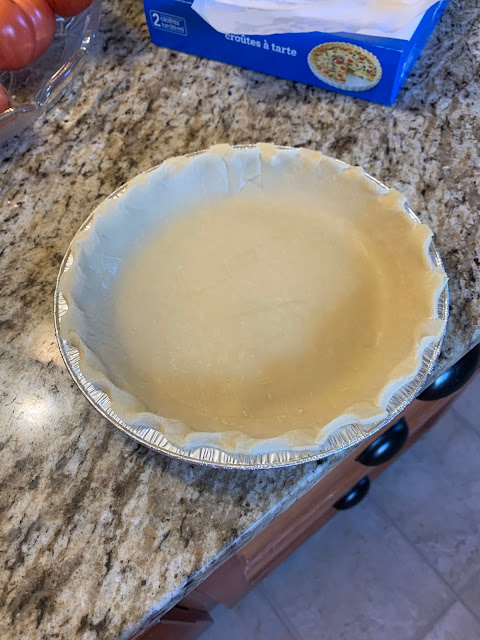 When thawed, I crimp the edges for two reasons: it makes it look more "homemade", it helps hold in the filling better.

You need to "blind bake" the crust. That means it needs to be put in the oven for several minutes to crisp up first before you put anything into it. I imagine that's because it is a rather sloppy pie in the end.

This time I took a suggestion from the interweb and put in some parchment paper (scrunch it up first, then smooth it out, so it fits better into the crust) and then poured some form of hard, dried beans onto it. I had lentils, so I used those. Note: in retrospect, I would choose a different method - the crust under the parchment remained moist, not baked, so I had to stick it back in the oven to crisp up a bit. Next time, use fancy baking weights to blind bake and no parchment! The reason for weights is to keep the bottom of the crust from bubbling up while it bakes. 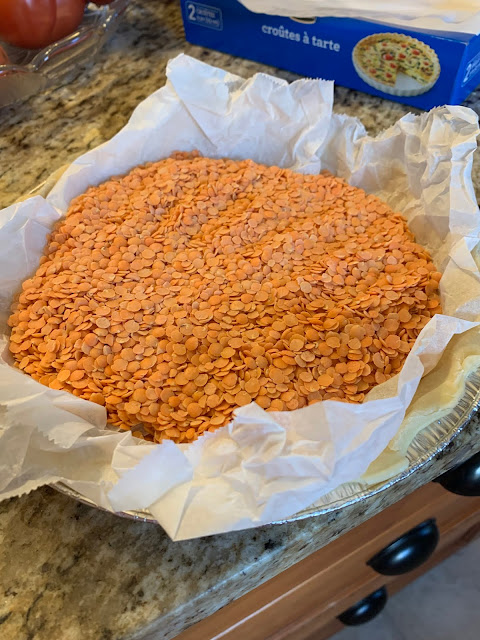 While the pie is in the oven, choose approximately 4 or 5 tomatoes. It all depends on how big your tomatoes are, perhaps 3 or 4 if they are quite large. Slice them in "medium slices" and let them start to drain. I use a colander for this. Some recipes suggest to sprinkle them with salt to leach some of the moisture out. I don't bother. 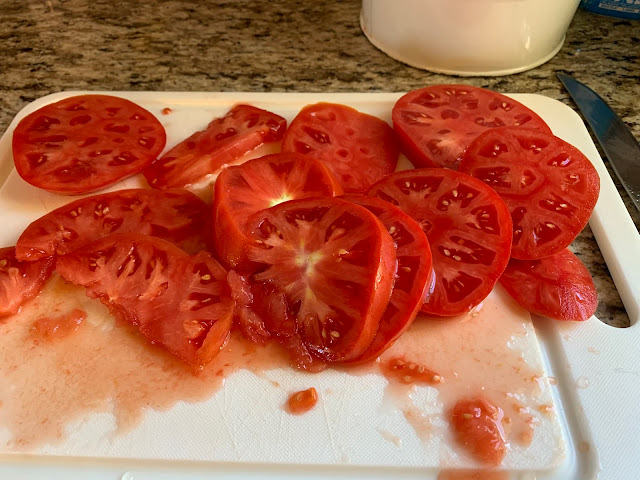 In the end, I needed more than this. You can also place the slices on paper towel to absorb moisture. A quicker way to deal with sloppiness is to just pop out some of the seed casings which hold a great deal of moisture. If I were to do it again, I'd seed them, and  lay them on paper towels. 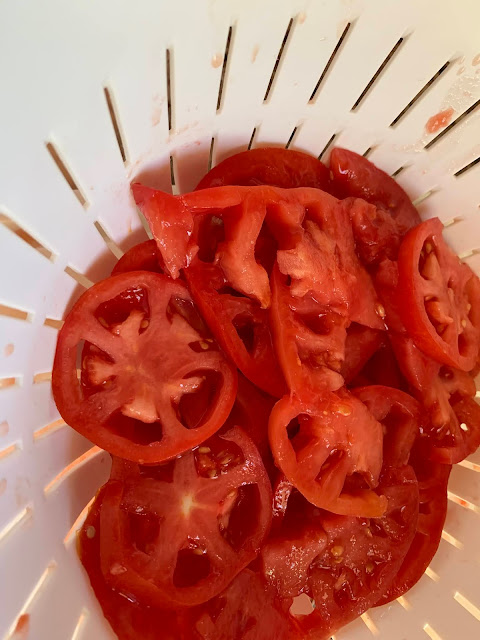 In addition to tomatoes, you need a bunch of green onions, chopped. 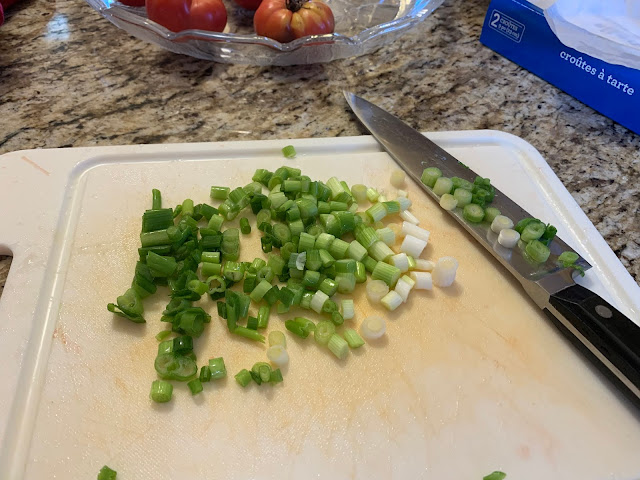 You also need some chopped garlic. You can use cloves, or pre-chopped in a jar. 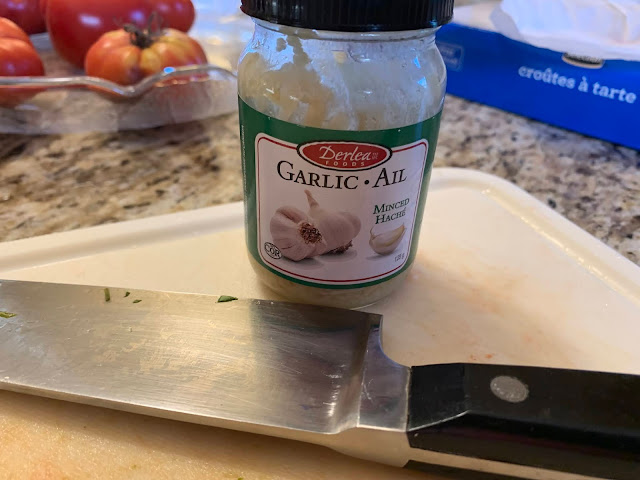 As well, you need several basil leaves. It is best with fresh basil, which you may also have in your garden, but I imagine dried basil is fine, too. 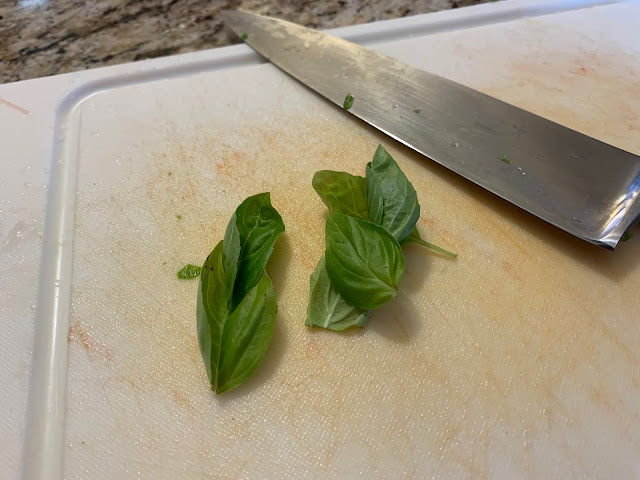 Begin assembling the tomato pie by putting in a layer of slices in the bottom of the pre-baked crust. 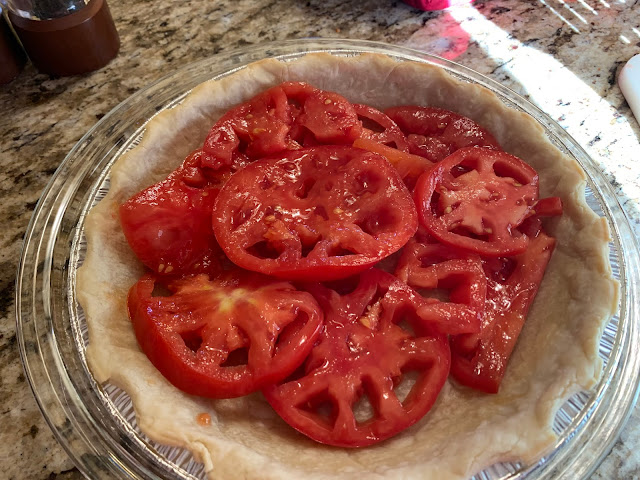 There is no need to be precise with this. Just remember you have another layer to go, plus a topping, so don't make that first layer too high. Next, sprinkle with half of the combined onions, basil, garlic, salt, and pepper. 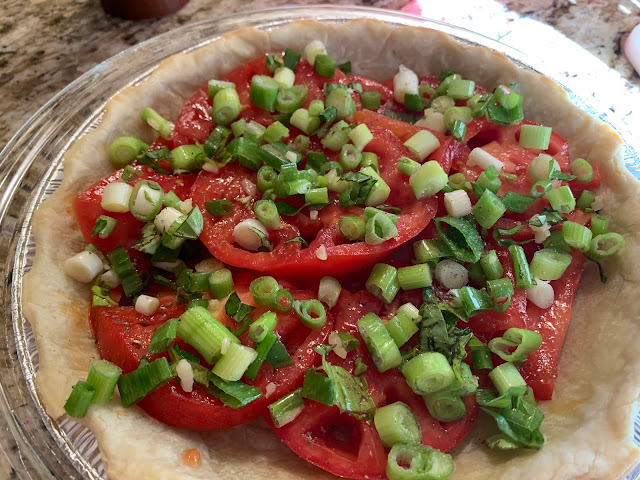 Then lay down the next (last) layer of tomato slices. 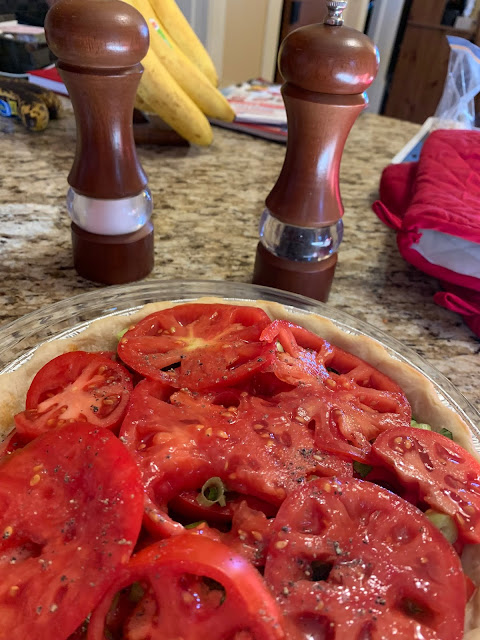 Don't forget to sprinkle salt and pepper on the layer. Follow by putting the rest of the onion, garlic, basil mixture on top. 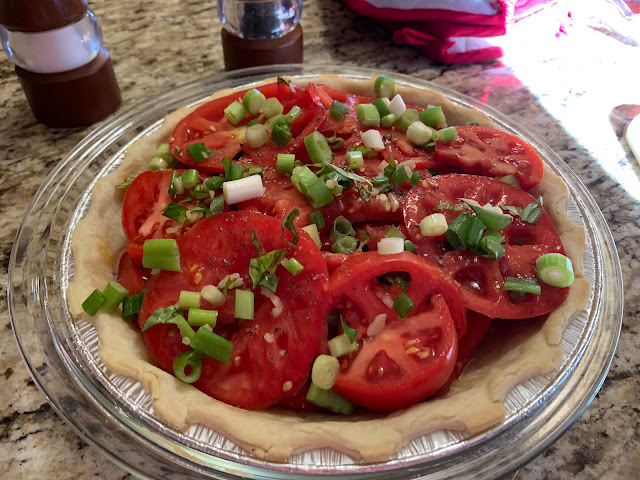 Now, you create the topping using shredded cheddar and mozzarella cheese mixed with salad dressing (like miracle whip) or mayonnaise. I did not have any mozzarella, so I used some parmesan cheese instead. I prefer mozzarella, for what it's worth. 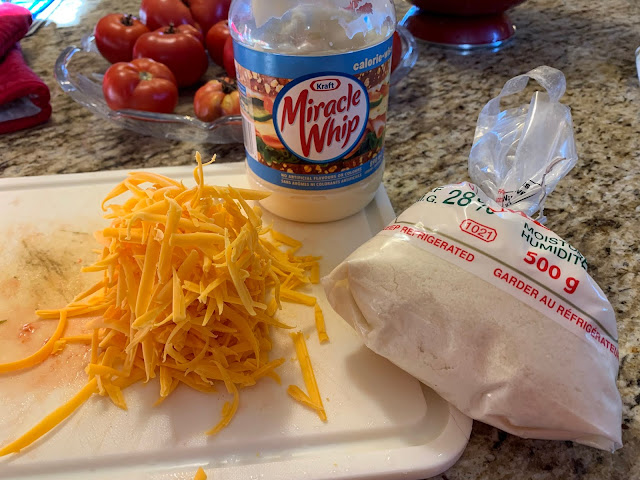 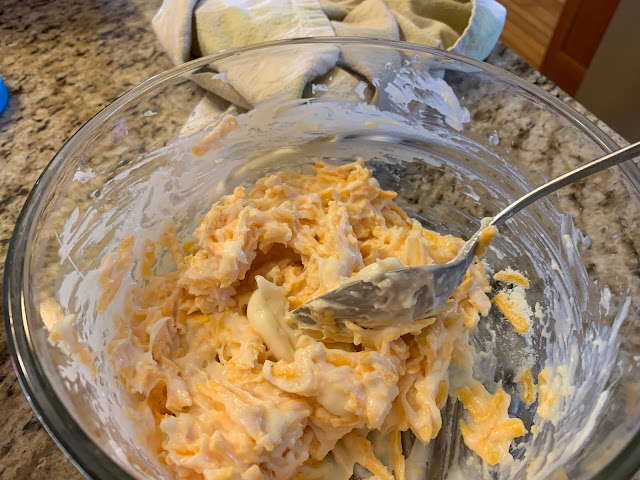 "Spread" the cheese mixture on top of the pie. You will not be able to actually spread it, you'll more likely plop clumps of it from a spoon, but it will spread as it melts in the oven. 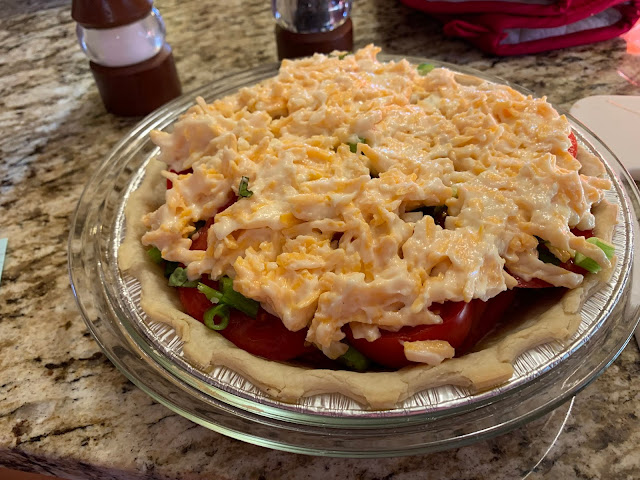 Finally you bake your tomato pie. This is how mine looked. 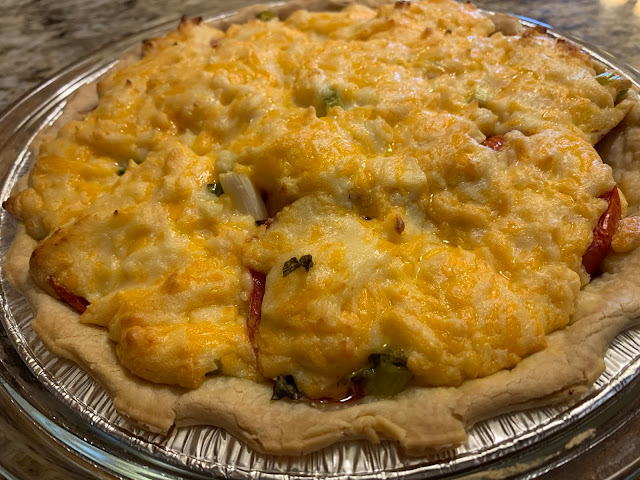 As you can see from the picture, I put my pie crust, which comes frozen in the tin foil form, inside another pie pan. This is because I always end up cutting through the tin foil when slicing. As well, I find the tin foil pans too flimsy for a substantial pie like this.

You may want to let your tomato pie sit a bit before slicing. Mine was still pretty liquidy, but really yummy regardless. As I said earlier, I think getting a bit more moisture out of the tomatoes wouldn't be a bad idea next time.

Blind bake (pre-bake) pie crust at 375 degrees for 10 minutes, remove from oven, and reduce oven heat to 350 degrees. Lay tomato slices in a colander and sprinkle with salt and let drain, or pop seed pockets out and lay on paper towels to absorb moisture.

Lay half of the tomato slices in the pie crust. Mix the green onions, basil and garlic together in a small bowl. Sprinkle half of this mixture over the tomato layer. Sprinkle with salt and pepper.

Follow with a layer of the remaining tomato slices. Sprinkle with the rest of the onion/basil/garlic mixture and sprinkle with salt and pepper.

Create topping by combining grated cheddar and mozzarella cheese (or cheese of your choice) with mayonnaise or salad dressing. Spread this mixture on top of the pie.

Bake for 30 minutes at 350 degrees. Let sit a few minutes before slicing.

Happy, happy, joy, joy. Today I got my hair cut - significantly. I honestly cannot remember the last time I had my hair cut. It's been months and months and months. I was recommended this hair dresser. She has her own shop - it's just her. I have a hard time finding hair dressers that I like (can tolerate) and I think I like this one.

My hair is frizzy, coarse, and if let to dry on it's own, kind of wavy-ish. This is daughter and I at the end of June when we could go to her university and pick up her degree - the only thing that came remotely close to a graduation celebration, so we took lots of pictures. This was a humid, windy day. I had actually straightened my hair that morning (has a life of its own). 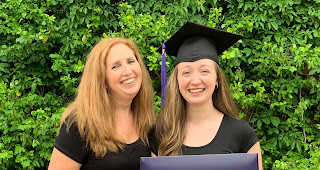 Here I am today, after my haircut and after the lovely hairdresser made it all nice and smooth with the blowdryer and a brush. 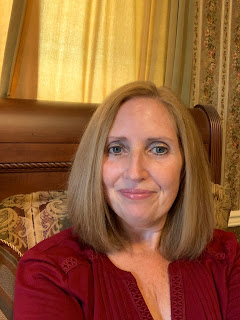 I am happy with the length - short enough to feel different (and it will be different the first time I go to wash it, for anyone who has had the experience of long hair, and then shorter- you know what I mean) and still long enough that I can pull it back so it doesn't drive me nuts in the heat, and when gardening and cleaning, etc.
By the way, is there anyone over the age of 50 who knows how to take a decent "selfie" with their phone? I literally went through 14 different images before I found one where I didn't look perturbed or somewhat stunned or like I'm detecting something a bit "off" in the air.

I am making tomato pie tonight and daughter is so happy. Son just went back down to his college and the place he rents there - he dislikes tomatoes, so I waited until now to make it. Tomatoes from my garden! Another reason to be happy.