As I am sitting here, typing up this post on a chilly April morning, there are no less than four lists in close proximity. One of those lists is so long, it spans from one side of a folded 8 1/2 x 11 sheet of paper to the other, and then there is a separate list on the inside. One heading says, "To Do Tomorrow". Of course, I wrote that probably three weeks ago, so it's not really a tomorrow list. I have crossed those items off regardless. 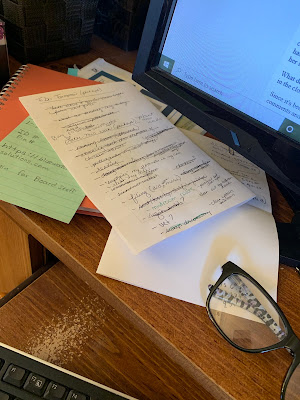 I make a list for grocery shopping - always. I start it a couple of days ahead, and leave it out so that other family members can add to it, if they have a request or if they've realized we are out of something. I categorize my grocery list with little headings: produce, bakery, deli, meat, can/box, dairy/frozen.

I have always been a list maker, especially in my profession. If something didn't get written down, it likely got forgotten and with my work taking me in many different directions (subjects), I needed to be organized. I had class lists, parent e-mail lists, deadline lists, and lists of things I wanted to accomplish.

Husband has lists. He has headings such as "Indoor", "Outdoor", "Personal" for his various tasks and things he needs to finish.

Mother-in-law always kept a calendar sitting beside her chair in the livingroom on which she wrote EVERYTHING. It was her version of a list, but now I realize it was probably also a coping mechanism for her progressing dementia.

I feel great satisfaction being able to cross items off lists. Sometimes I will write something down that I've already done, just so I can cross it off and feel that I've accomplished something.

Lists at home always go on scrap paper. I have a large (but nice looking) container on top of the computer desk filled with old hand-outs that didn't get used at school. So I might have a grocery list that has animals of the rainforest on the other side of the paper. My mother used old envelopes for some of her lists.

What do "the young people" do now? Do they make lists, or do they keep all of their thoughts on a file in the cloud somewhere?

Since it's been a while since I've posted a Mundane Monday, I'm looking forward to reading your comments and contributions to the mundane topic of list making!