Asking for an Opinion

I was wondering if any of you use Spotify. It's an app that lets you download music. I use the free basic level of Spotify, but because it's free, I only get some of the features. For example, I am only allowed to listen to playlists that I have made on "shuffle", I don't get to choose what I listen to first, and next, and so on. If a song comes on that I don't want at that time, I can skip it, but I'm only allowed to skip ahead about four times, then a message comes up asking if I want to buy the Premium level. Also, I always have to be online to listen to the music.

So... Premium costs a bit of money and apparently you can listen to what you want in the order you want and there are no advertisements that come on and interrupt the music.

I NEVER EVER pay for apps. If it isn't free, I don't want it. Mind you, I'm not a big techy person, so I likely don't even know what I'm missing.

I'm asking because I need something I can listen to in different settings, not just in my own home. I've started (to prove it to myself that I can) to run on the treadmill. I began with walking and running, alternating by looking at the minutes that go by and using those to gauge when I walk and when I run. I hated it until I started to listen to music when I ran/walked and then it was so much "more fun" (it's not really fun at all, but it's tolerable with music) Now I make little bargains with myself that I'll run for three songs, or whatever. When I listen to music from my phone on Spotify, I am stuck listening to whatever song comes up, and it's pretty limiting.

So We Thought a Cat Door Would Be a Good Idea...

We had become slaves in our own home. There are three possible doors out of which our "beloved" cats depart to go outside. They are very much indoor / outdoor beasts, even on the coldest winter day. Sampson, the eldest, has always let us know that he wants out by lifting and dropping the edge of the doormat with his claws. Sometimes he does the mat trick in front of the closest door to get our attention (i.e. to get us up off the couch) and then quickly moves toward the actual door from which he wishes to go out. He's actually pretty smart. Scooter, much younger and somewhat less intelligent, or so we thought, has learned the door mat flicking technique. We do a lot of letting out.


In order to ask to be let back in, our cats jump up on an outdoor window sill, close to one of the exterior doors, and "ping" (i.e. pull with claws) the screen on the window. In the winter time, there are much shorter durations between letting out and letting back in because, well, it's cold. But they really do want to go out, but then they really do want to come back in, and on and on it goes.

Not only were we tired of the constant doorman routine, but we were also anticipating an upcoming trip we were going on. We do not have family living any where close to us, so when we go away, we leave the looking after of cats to our reliable teenage son. This time around, however, we were going to go on vacation and take both of our children with us, so no teenage son in residence to let cats in and out. We have, in the past, asked our neighbour across the road to look in on our animals for us. He kindly agrees, but he works full time and he is not a "pet person". He agrees because it is the neighbourly thing to do. Also, it would be ridiculous to expect him to come back and forth to our house in the cold and snow to constantly let our cats in and out. That's asking too much of anyone! We had been contemplating a cat door for a while, so we decided now was the good time, well ahead of the trip so that our cats would learn the whole cat door process before we left.

Husband, who has no fear of tackling any home project, quite adeptly cut through a wall and installed the cat door in our mudroom, a perfect place because the access is well back in our car port where snow will not gather (defeats the purpose if you are shovelling snow away from the cat door) and the mudroom can be a self-contained large area where the cats can have their food, enough space to get away from each other (Sampson barely tolerates Scooter), and a litter box if necessary. As well, doors can be closed from the mudroom to the rest of the house so that the cats can go no further.

It was a "simple" cat door with a frame around the outside and a sturdy plastic flap with a magnetic closure. 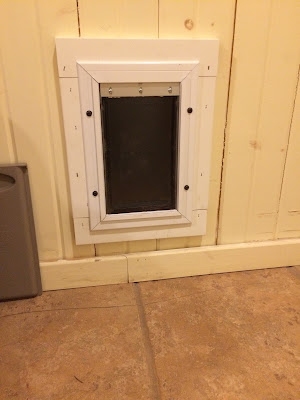 We then began the process of teaching the cats how to use it. We moved their food and water to the mudroom, from the kitchen where it had been since we got Scooter. They had to know it was the new location so we were picking them up and carrying them out there quite a few times. As well, every time they wanted to go out and started lifting and dropping a mat in front of a door, we would pick them up, take them out to the mudroom and lift the flap of the cat door, gently urging them to go out that way. And yes, they continued to jump on the outdoor windowsills and wreak havoc with the screens. We would go outside (yes, it's winter) and literally walk around the house, cat in arms, to get to the car port and lift the flap to gently urge them to go in the cat door. This went on for many many days until Scooter (who knew??) figured it out on his own. We praised him every time he showed up in the house after using the cat door (do cats even care about praise?) and eventually Sampson also got the idea.

You know there's going to be a glitch, don't you? So, here's the glitch. I don't know if there's some kind of a cat telegraph line, or that our cats are just really friendly, social beings, or the neighbourhood cats look at our cats and think, "Gee, you're looking well fed!" and our cats are communicating back, "There's lots of food, come on over!", but we had a total of THREE other cats easily and gleefully using our cat door. In fact, they didn't just use it, but they went from the mudroom into the rest of our house! We spent a lot of time chasing cats away from our home, from our porch, from our mudroom, from our den, from underneath our cars (not in a bad way)... One of these delightful stray (but well fed) cats was also an unneutered male who felt the need to establish his territory all over my front porch and back porch and car port... Blehhhh!!!

Time marched on and it came time for us to leave for our vacation. We bought lots of cat food and large bottles of water which we kept in the mudroom. We propped the door from the mudroom to our den open and draped the couches and chair with sheets and blankets to protect them because I am a softie and thought our cats would like the comfort of lying on a couch for a week while we were gone. That was going to be their world, when they wanted to be inside: the mudroom and the den. We gave our key to our neighbour and asked him to just pop in every once in a while to check on the food and water levels, topping them up as necessary. We did tell him that there have been a couple of stray cats around and for him not to worry about it. The day before we left, I also watched a raccoon climb up the big blue spruce just off of our back porch. A raccoon which could likely have squeezed itself into our cat door along with the other animals. At that point, all we could do was put the luggage in the car and lock the door behind us.

Fast forward to returning from the vacation, luggage partially unpacked in the front hall, needing another vacation after the vacation... , our neighbour returns our key. We find out that one time, when he came to check on things, there was a totally different cat in our den. He had startled the cat and it shot around the room, leaping up in the air and actually knocking a painting off the wall! There had been copious amounts of cat hair all over the sheets and blankets draped on the furniture, and , I swear, there was a portion of cat poop on the baseboard in our den. Nowhere else, just clinging vertically to the baseboard!! How does that even happen?

Lord knows what else happened while we were away, what kinds of cat parties occurred, how many other species were in our home, but after we had been home for about a day, Scooter, who NEVER EVER EVER sits on anyone, jumped up on the couch on which I was relaxing with my feet up, and crawled on my lap and purred, for quite a while. Remorse? Forgiveness? Guilt?

Needless to say we had to close the cat door (there is a sliding closure that comes with it, we didn't actually diagonally nail a couple of boards over it) to prevent the onslaught of stray cats. We also spent a lot of time discouraging cats from showing up close to our home. In fact, I really don't even think they were strays. They looked cared for, fed, and they obviously knew how to use a cat door. I just wanted them to not come to MY home. If they go to someone else's home, that's fine with me.

Of course, closing up the cat door then led to more confusion and perhaps you could call it "untraining". Now our cats had to let us know they wanted out and in (and out, and in, and out...) the old fashioned way. Big sigh combined with an eye roll.