To lighten the mood from yesterday, I invite you to join in my morning ritual. I opened the little chicken door and got my phone ready to capture the morning rush. They really do run and tumble out. 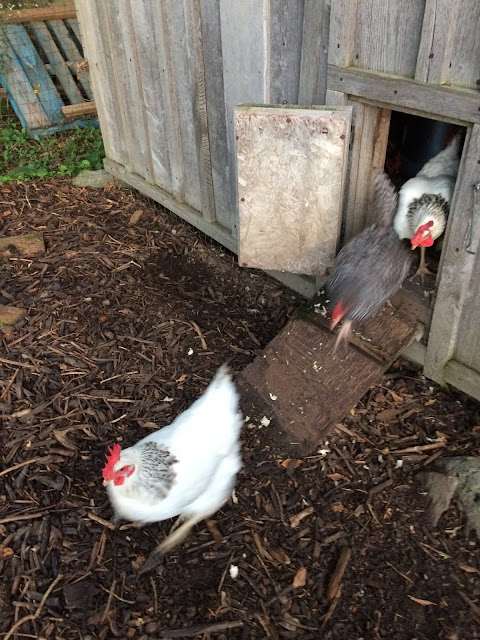 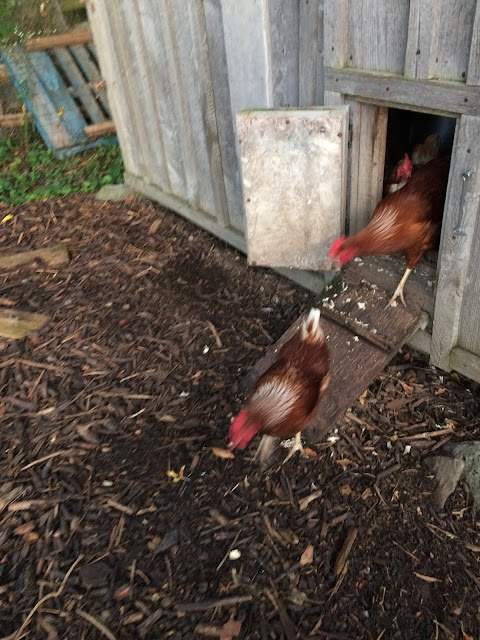 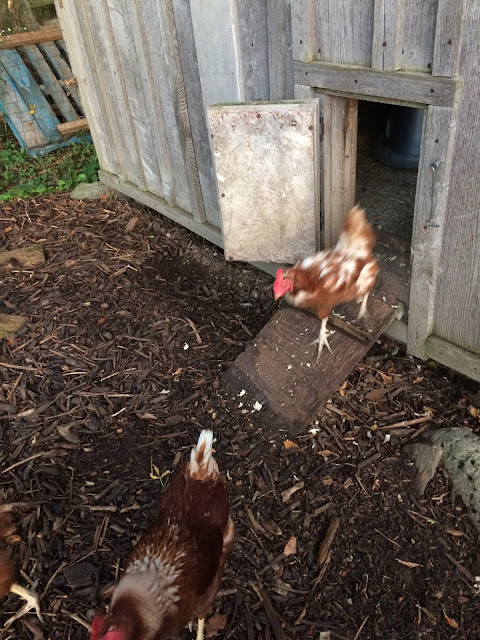 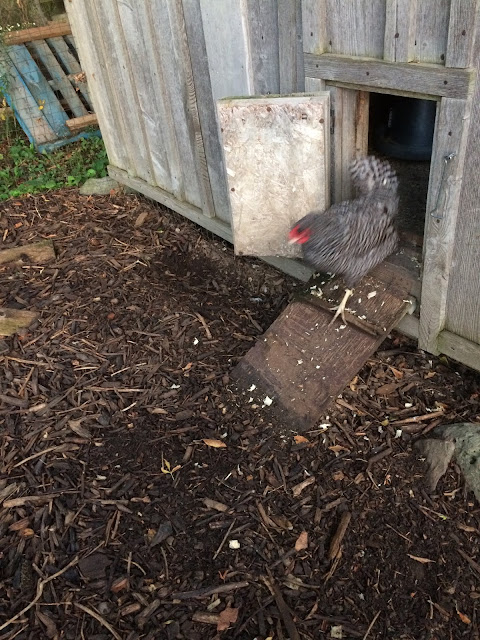 Still more...
But let's turn on the light and go inside. 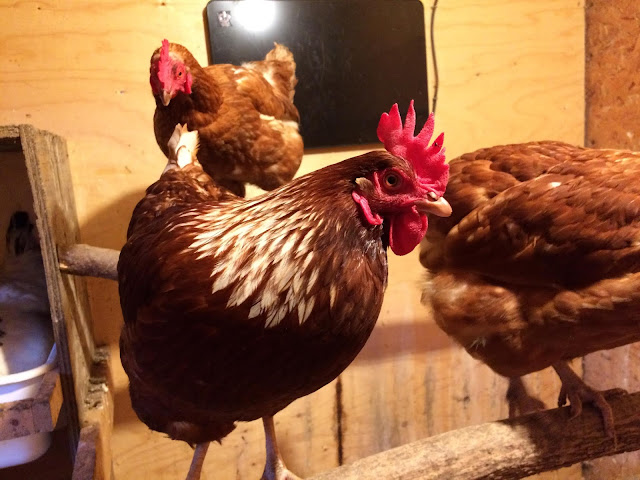 Still on the roost. 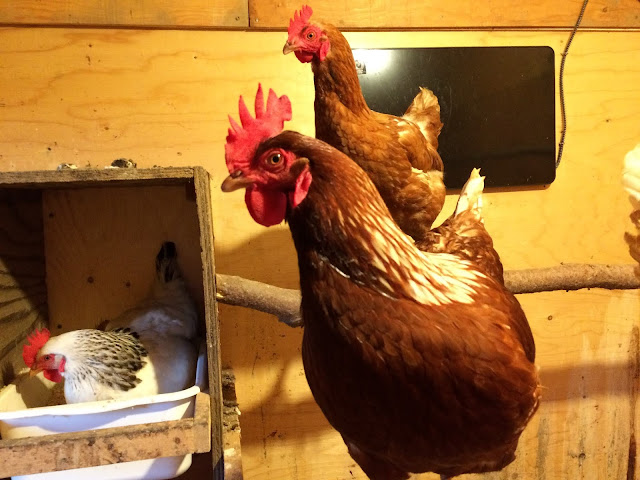 Giving me the eye. 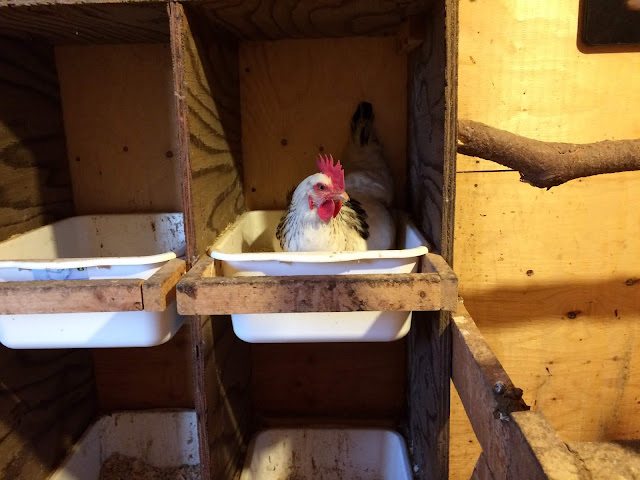 She wasn't laying an egg, she was just sitting there. 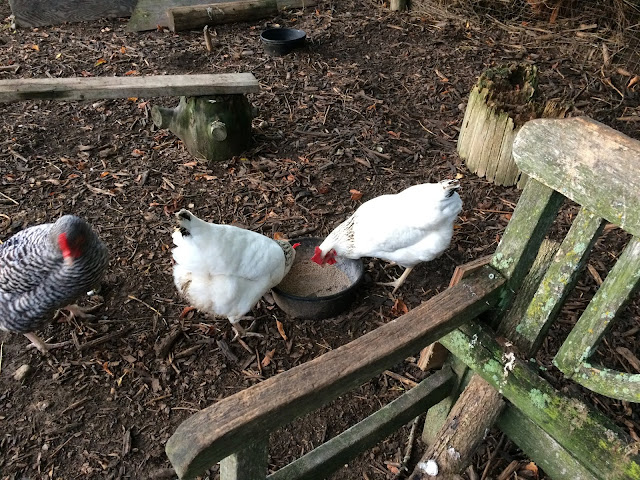 Although they can eat exactly the same food inside the coop, they get very excited to dine al fresco and wait for me to feed them outside each morning. 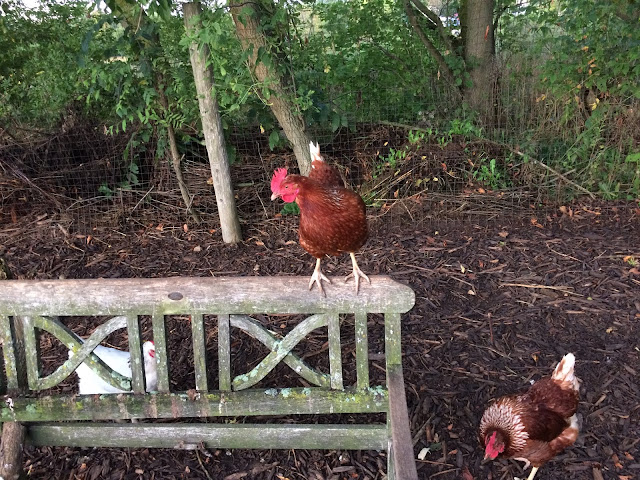 On the chicken bench, surveying her world.

I'm finally getting around to writing a post this morning. It's warm outside and wet - we've had some rainy days lately, but it is looking much more 'autumnal'.
Two weekends ago, we were a flurry of activity, assisting in getting ready for propane to be installed in our very old home. As we approach retirement, and therefore, will have less money coming in, we decided a good way to reduce our costs would be to convert to propane from our current heating oil. Husband did a wonderful job talking to a variety of companies and contractors and getting a good price for all the necessary work involved in changing over to a different heating system. Part of the deal was to do the 'trenching' ourselves, so a trenching machine was rented, and picked up (a pain in itself) and the ordeal was frustrating beyond belief. It did not cut down to the depth it was advertised to, so we were literally lying in the ground, trowels in hand, scraping out earth to try and create a deeper trench. This trench ran from where the big propane tank would be placed, around the side of the garage, along part of the length of the house, around a spruce tree and then back up to the house to be connected to the basement. The rocks we encountered were hideous. Our son, thankfully, was able to spare his weekend from college and drove all the way home to help, and then all the way back for Monday classes. 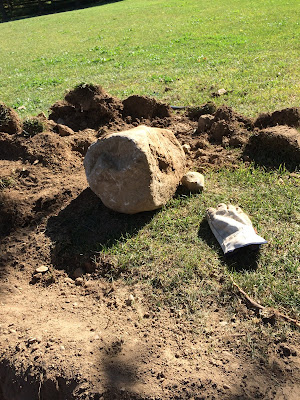 I threw my garden glove down to give you perspective in the picture, but this isn't the biggest one by far. Son now knows how to wield a pickaxe like a professional! As with everything, the process is still not done, with the contractor waiting on parts, or something. Thankfully, we are not yet into our full-on heating system and our yard remains a scene of trench warfare. Until they pressure check (? does that sound right?) the system, we don't fill in the trench, and plant grass seed. It's funny because we have a "country" lawn, in that if it's green, we mow it. We don't fuss with weed killer or over seeding with grass seed because we have an acre of land and are surrounded on two sides with empty fields filled with burdock, goldenrod, and various other vigorous weeds. So, when we do fill in the trenches and plant grass seed, we will end up with lovely green grassy sections, like a landing strip.


To move on, here is a picture of Samson, wanting to be taken back to son's college with him. It was heart warming, as son was packing up Sunday evening to start the drive back (yes, that's clean laundry in the back of his car!), Sammy jumped in and had to be removed by hand. They have a close relationship, those two. 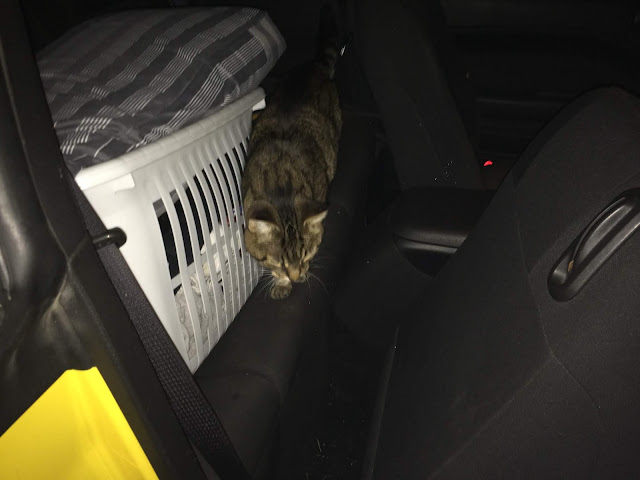 As to all the other days in my life, when I return home from work, all I have in me is enough to prepare supper and do a few small 'chicken chores'. I am flat out tired. I never signed on , thirty years ago, to be a specialist in autism, a councillor, a mental health professional, a juggler of all things, but here I am, expected to do it all, with no support. This is a young person's profession, I believe. Or things must change, however, I won't be in it long enough to see change. So, I carry on and do my best and support my colleagues who are in similar boats.

Today, Saturday, I will pick up a few groceries, perhaps bake zucchini carrot muffins, and try to take it easy (but I do have I.E.P.s to write which are individual education plans). On Sunday, husband's mother, who has dementia, is actually going to be flying on a plane to stay with her daughter in another province for a couple of weeks. Husband will be driving her to the airport in Toronto (about three hours away), getting her as far as he can until he passes her on to a person who is in charge of her care until she is loaded on the plane. It's a bit like arranging for a child to go on a plane. Friends of ours are Dutch and they had done something similar when one of their children went to Holland to be met by relatives at the other end. I do hope this goes well. I will be writing her a note on brightly coloured card that she can look at to reassure her, and remind her to what's happening, and who will be meeting her at the airport. Mostly, I wonder who will be seated next to her on the plane, as they will be engaged in a repetitive conversation for the whole way. I think it will be about two hours in total, but I'm not sure. Husband's mother has certainly flown on planes before, back when dementia was not part of her reality, so the idea of being in an airport and on a plane doesn't scare her. We helped her pack last night, but I suspect she will have gone through the suitcase already, checking and double checking. Although I don't relish the thought of taking my Sunday to be part of this, I may come along to help out. I'm not sure yet. I really do need a weekend to recoup.

To end, one morning, when I went out to open up the coop, I saw this hawk in the process of ripping apart some poor, unsuspecting bird. I went back inside to grab my phone. I couldn't get too close to take a picture, but when it did fly off, it took its prey with it. I love seeing hawks! I'm pretty sure this is a Cooper's hawk. 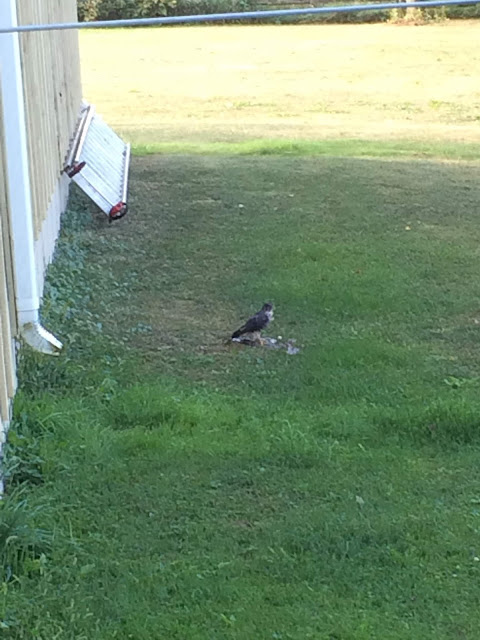 We've never had a chicken taken by a hawk, for those of you who are wondering. This is a medium sized hawk, not one of the big ones. I suspect it's far more interested in doves and other songbirds.
Have a good weekend, everyone!

After the First Week...

Honestly, I'm not a super cry-ie person generally. I have always believed in raising children to become independent, responsible, capable human beings. But here's the deal - having the second (and last) "child" move out of the house was a whole different ball game. I turned into this ridiculous sappy mess leading up to the day he went away to college. I held it together on moving day until the very end when we hugged to say goodbye, then I started and then my daughter looked at me and started. I made sure we were outside the college entrance, off to the side, so as not to embarrass son, not that he knew anyone anyway. I don't mean I was a sobbing, bawling mess, clinging on him and wailing away, but my face was screwed up and there were some tears.

Then two days after that, daughter moved back to her university city. Not as many tears, because we've been down this road before with her. She'll be fine, she's established there, has friends, knows the score.

The next morning, as I was going through my routine, getting ready to go to work, I found myself in son's room - just standing there, taking in the nineteen-year-old-young-man essence that still hung in the air. I resisted texting him that morning!

Daughter, of course, texted the next day to show that there is now a cat living in the house she rents part of. Nice! Then texted about getting into a course that she didn't think she'd get into to, but there was one opening left, and she did. Then texted to show she was eating one of the muffins I had sent her away with (homemade - zucchini chocolate chip - made with love - yes, son got some, too).

Then, it wasn't until a couple of days later that I started to realize I now have another drawer in the bathroom. I do not have to shift and balance my way through four different bottles of shampoo, conditioner, body wash, god knows what else... in the shower. There is an extra bed I could go to if husband's snoring gets to the "I want to smother you with a pillow" stage. And when I go grocery shopping tomorrow, the list will be considerably smaller. These aren't necessarily observations of "better", just different.

The whole getting back to work thing? To use an over-used phrase, it is what it is. It is what I do as a profession, I've done it before (30 years of it) and I'll do it one more time, and then that's it. It's a new group of students, we'll established routines, we'll work our way through the curriculum, we'll deal with all that is eight to nine year olds. We've already had our first staff meeting, we have "Open House" (formerly known as Meet the Teacher or Meet the Creature) this coming week. These make for long days when your body is just getting used to standing all day long and your throat is getting used to talking all day long and you're reminding yourself that patience is a virtue.

We are now just the two of us. But our conversations still often revolve around the kids. Today we are off to a little Fall Fair where we will see a display of my aunt's artwork. She died a little while ago and her daughter is putting on a display at a fair that is the "hometown" of her mom's youth. We will see my siblings, as we are all doing a bit of a jaunt to go there and enjoy looking at her paintings again. After, we will visit with my childhood friend and her husband, who are also now empty nesters, but not quite as much, as their son lives just down the road with his wife and new baby.