Scene from my bedroom window: 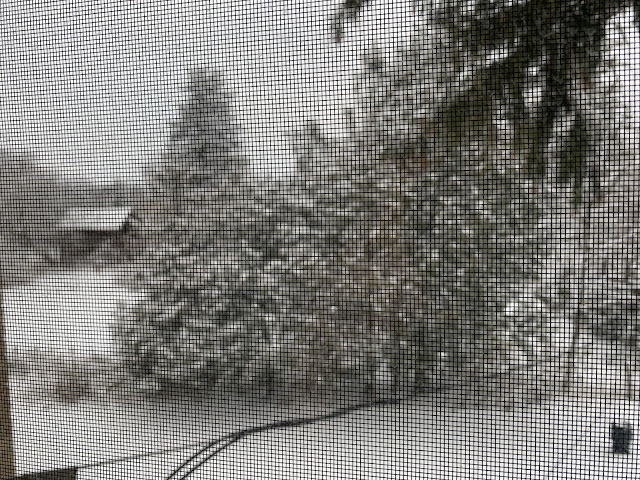 It’s actually very pretty if you can squint your way through the window screen. It makes me feel Christmasy.

We have new “across from us” neighbours. It’s a family which is nice. They come from a city so I hope they know what they’re in for here: no gas station or corner store in our tiny village. No Costco or IKEA within hours of us. And our cat treats their new property like his own. But husband met “him” and says he seems very nice.

Husband and I decided to start to watch another series on Netflix together ( we rarely have similar choices in tv watching so it’s nice to sit together and actually watch the same thing). I blew the whole Downton Abbey thing by binge watching it without him when I first messed up my back. So we are now just starting to watch Narcos which likely many people have already watched. But so far so good, although we are only three episodes in and quite a few people have already been shot, but that’s to be expected.

Anyway, it’s a quiet dull Sunday for me and I wish I could start decorating for Christmas but perhaps not yet as my back would be protesting too much.We may buy our tree tomorrow although it’s early for us, but “they” say there will be a shortage of Christmas trees, whether “they” are to be believed or not, I don’t know.