Sunday here. We were planning on putting up our outdoor lights. We string them along the rail fence that goes along the front of our property. It's cold, but at that time it wasn't snowing. We got the box of lights out of the "Rubbermaid Room" and the box of wires that we use to secure the lights to the rails. We discovered that last year's clear white lights only partially lit up, so we went back to the multi-coloured lights from previous years. Husband and I bundled up and began the task. When we were pretty much done, he had gone inside for something and I was at the door facing out to the porch. I saw a big raccoon coming from across the road onto our neighbours property. Hmmm. You don't usually see raccoons in the early afternoon.

I watched and it went behind the neighbours and came out at the neighbours beside that and stood for a while by their detached garage. I told husband about it and he saw it, too. We continued with putting up the garland around the door and were pretty much done. A short while later I looked out and saw our new neighbour standing at the end of our driveway using his phone to take a picture. I came out to him(it was our first meeting by the way, I introduced myself) and he was taking a picture of the big raccoon which was now in our carport. Husband went out and scared it away from our closed garbage can. Neighbour and husband couldn't see where it had gone.

Husband discovered a little while after that, that it hadn't gone far and was holed up under the car cover which protects his little car that doesn't get driven in the winter. Not good. So, he went to find our live trap in the shed in the backyard. Meanwhile, we checked and found that both of our cats were sleeping peacefully inside, so we closed up the cat door. That's the last thing you want coming in your cat door - a great big raccoon!

We baited the trap with salmon. We had an old peanut container wired to the back of the cage (so the animal has to come right inside and work at getting the bait). Husband set out the trap and weighted it down with a cement block. 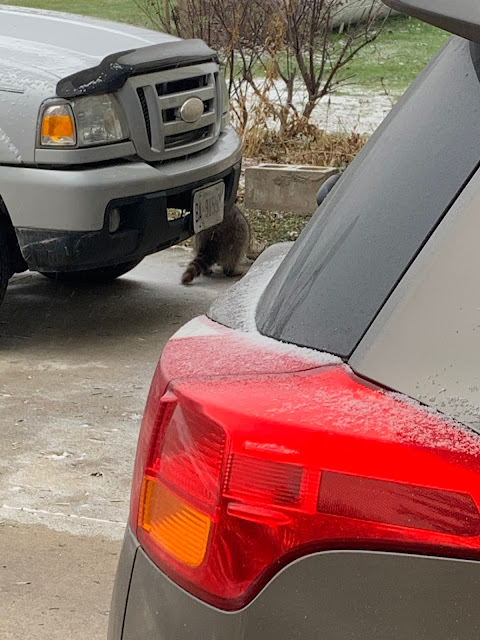 I took this picture from the door that looks out toward the car port. You can see the raccoon at the side of the trap trying to reach in to get the salmon.
And that it did! With its amazing little nimble "fingers" it managed to pull the container toward itself. This was not a metal container, but if you are familiar with peanut containers, they are a very thick cardboard type of material with a metal rim. I think I had used that in the past because I could poke holes through it to be able to wire it to the back of the cage. Well, the raccoon just took its time and bit by bit ripped through the container from outside the cage and had a lovely snack. 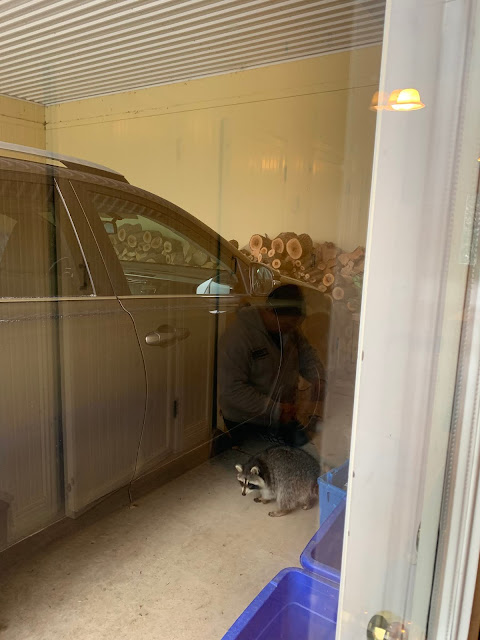 After husband "scared" it away so he could retrieve the live trap and try again, the raccoon came back quite quickly and had another mosey around the car port. You can see husband in the reflection of the glass and the beasty out by our blue boxes (recycling). 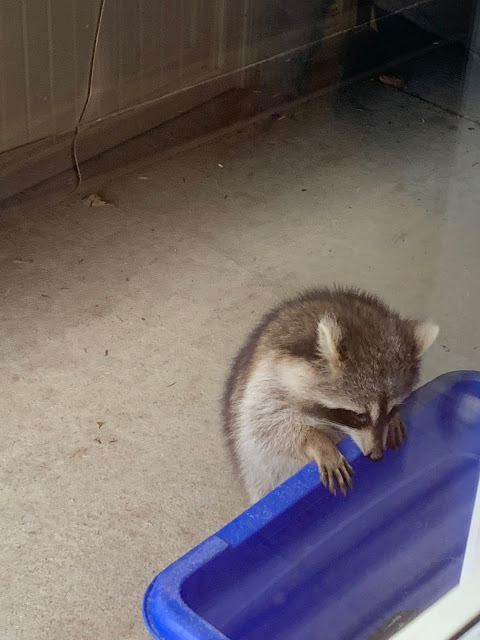 He had a poke around the recycling box. Look at those paws. Made for disassembly and nuisance. Husband created the Raccoon Trap 2.0 by using a tall yogurt container with holes poked through and a good sturdy wire. This way the raccoon would not be able to reach down far enough to get the salmon from being outside the trap. He also used more cement blocks to prevent the raccoon from reaching in from all sides or the back. As well, a tasty trail of salmon led in from the door hatch.

The raccoon came back almost immediately and stayed outside the trap, trying its best to get at that salmon. He (She?) would walk around to all sides, but wouldn't go close to the door way of the trap. However, the lure of stinky salmon prevailed and in it went. These are pictures taken through a window, so not the best. It couldn't have cared less that we were watching through the window. 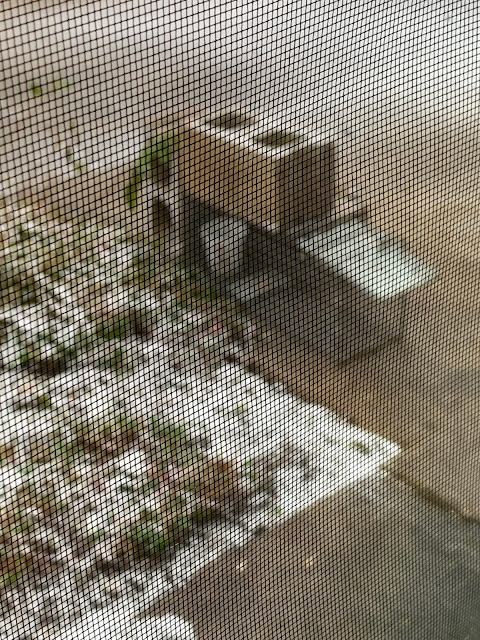 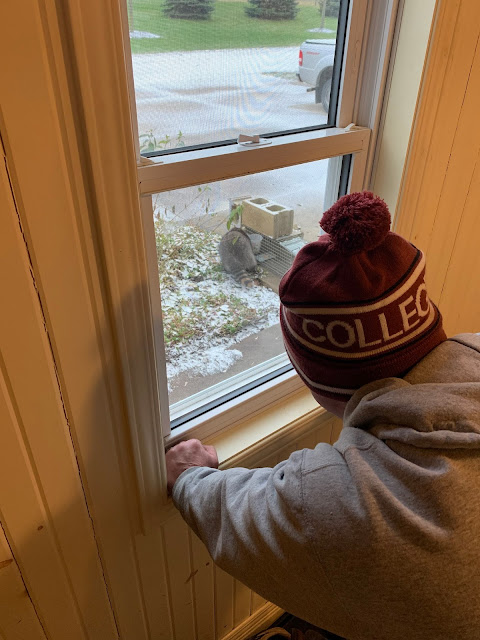 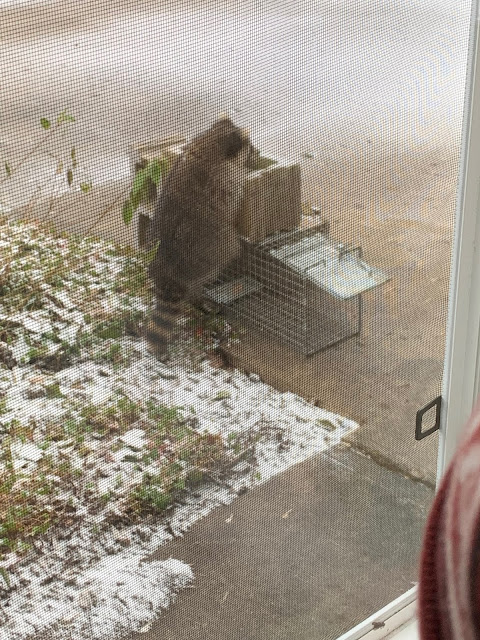 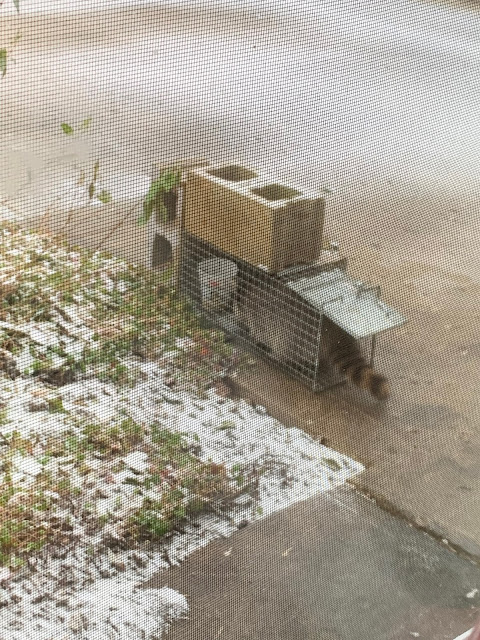 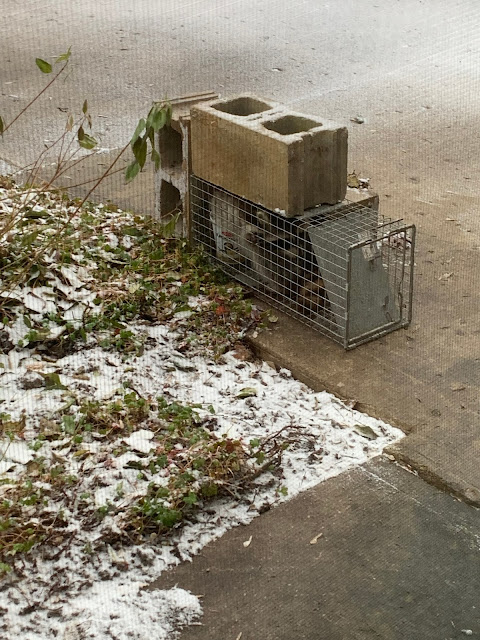 Success! Got the critter! It didn't seem very bothered at that point, just enjoying the salmon. 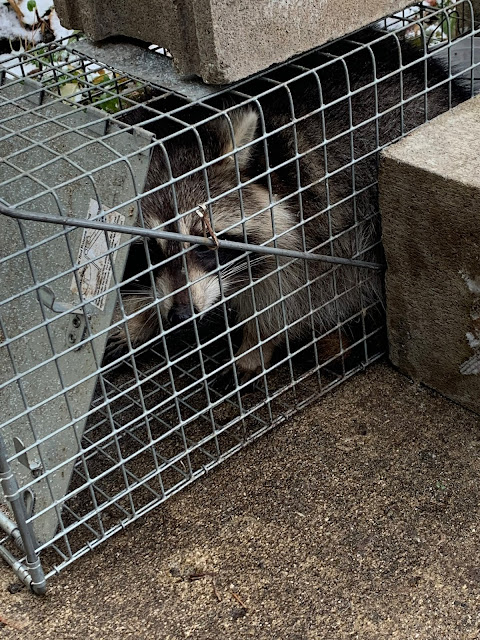 Then husband thought he would ask neighbour guy if he wanted to go on a road trip to release the raccoon far, far away. He put trap in the back of his truck and drove across the road to neighbour's house. (They haven't quite completely moved in, biding time between here - relatively middle of nowhere- and the big city). When he knocked on the door, he discovered the whole family wanted to see the raccoon, so neighbour wife and three neighbour children all came out to have a peek. Husband and neighbour guy drove quite a ways away to an area where the raccoon could live a happy life without crawling up into someone's attic and creating absolute havoc. He (She?) was released and they came home.

This wasn't really how we anticipated the day going, but a neat way to get to know the new neighbours. I wonder if they are regretting moving to our tiny dot on the map with the giant mound of turkey manure in the field and ravaging wildlife? Not to say that raccoons aren't a problem in the city, either.

I do hope Rocky Raccoon doesn't return (they are known to come back from great distances). So, how was your Sunday?

Email ThisBlogThis!Share to TwitterShare to FacebookShare to Pinterest
Labels: raccoon