After reading Deborah's post this morning, I thought I might share what we did this year to make this Christmas more whimsical and fun. After the last few months, I knew I wanted to insert some fun into the decorations and the Christmas season. Every year (EVERY YEAR) I put up the village. It has grown and morphed over the years and has changed locations in the house. Often I get help from the family. It's a bit of an ordeal, placing everything, hiding all the cords under the "snow". Deciding how we want to divide up the village - where will residential go? What about the commercial district? What about the duck pond? Is the school too close to the pub?

Along with all the buildings, there are accessories like trees, stone walls, and people. I decided that instead of using the people we always use, we should use Lego mini-figs (figures). These are the little people and characters that come with Lego sets. Over the years our son received many Lego sets, some themed like Star Wars or Indiana Jones movies. Our son dug out his collection(s) of mini-figs and he and his sister (ages 22 and 26 respectively) started assembling them, including items in their little yellow "hands". Our daughter had the idea that we should each make a mini-fig to represent ourselves as well. That was fun. Mine had a book in my hand, husband had a drill in one hand and a beer glass in the other.

Then the placing of the little Lego people began which was lots of fun. Here's daughter with the village. 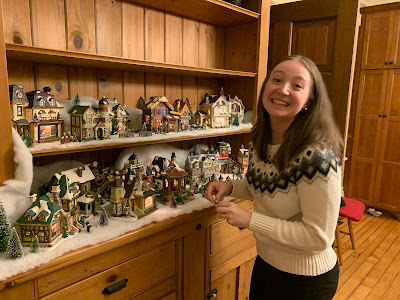 Next, Darth Vader has joined in on the fun. 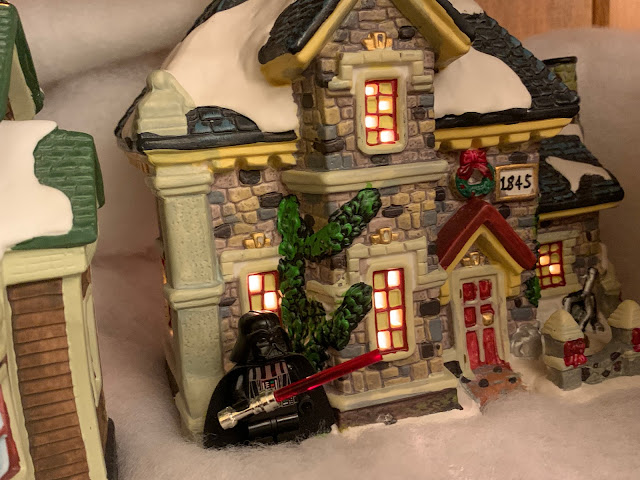 Frankenstein's monster is waiting on the porch of the Norman Rockwell collection home where two old folk are enjoying their tea. 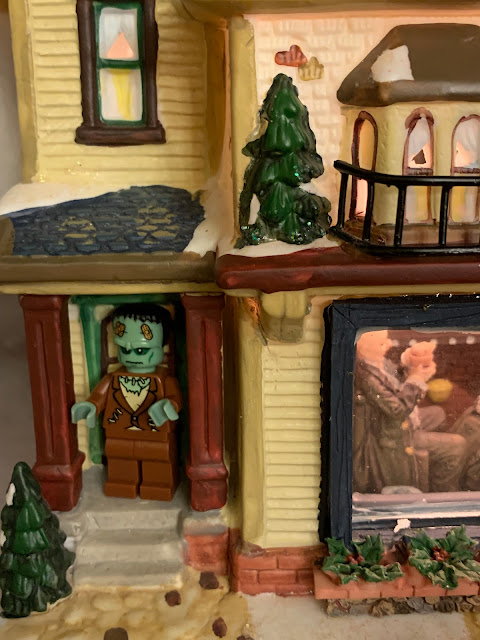 We almost always put Santa in the gazebo in the town square. We allowed for him to be there this year as well, but it is the storm troopers who are lining up for Santa instead. 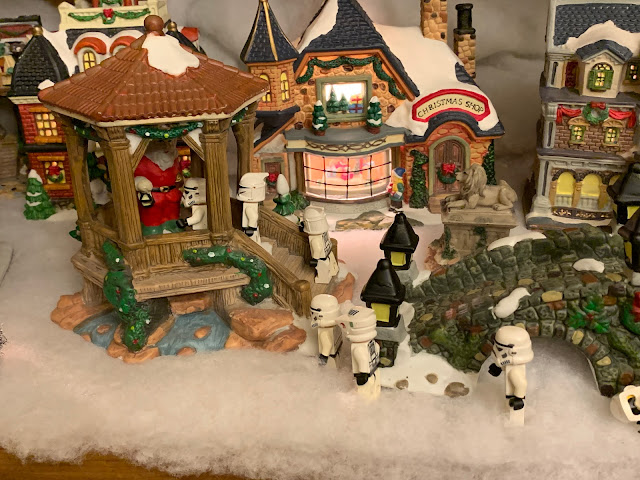 One poor, unfortunate storm trooper is being dragged under the bridge by a crocodile. It happens. 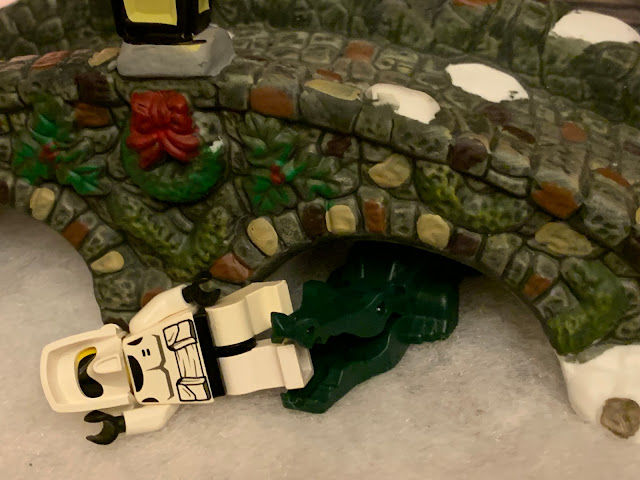 Next, we have Rebel fighter pilots (as the only non- Star Wars junkie in the house, I had to ask husband what the orange guys were) atop Santa's workshop. 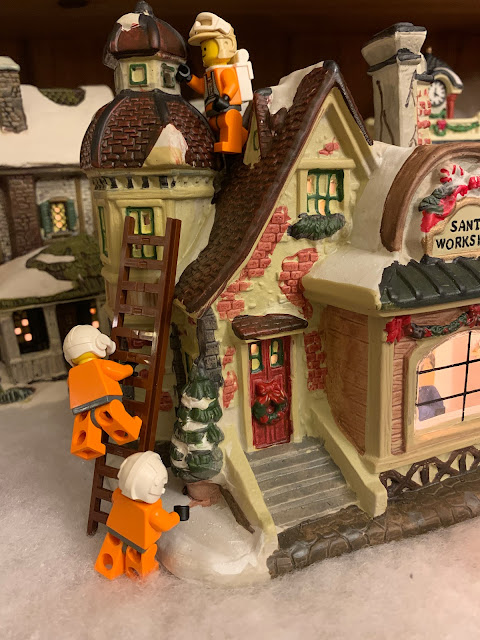 This knight is ready for battle on top of another Norman Rockwell house where everyone is gathered at the table for a Christmas dinner. If you look closely, you can see husband's mini-fig where he is sitting on the side porch, waiting to be invited in for dinner. 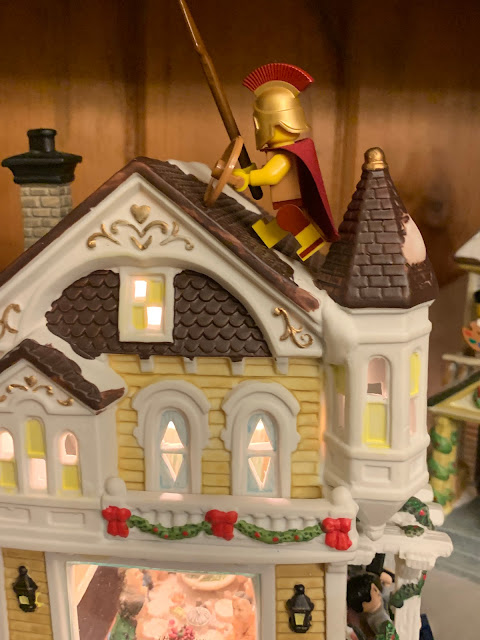 Outside the pub (the log built structure) we have Hagrid helping out a patron who is bent over the fence after too many drinks (it's actually daughter's boyfriend's mini-fig and no he is not a big drinker) with two Rebel fighters seeming to be ready for a brawl in the street. 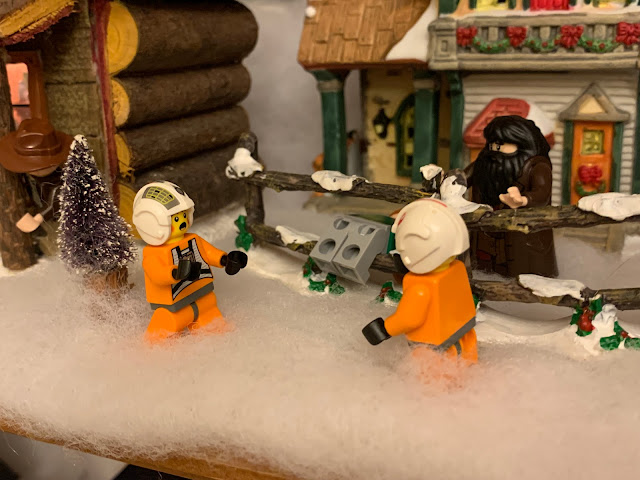 Outside the same pub, we have Han Solo and Indiana Jones (ha ha, get it, both of them were played by Harrison Ford, so they are seeing each other at the same time!) 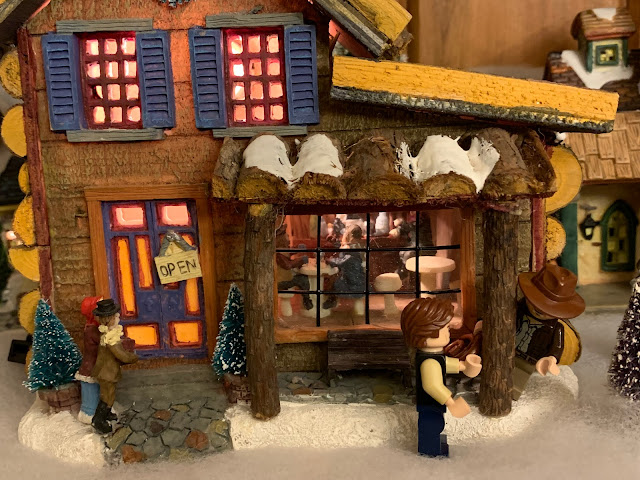 This is how the entire village looks. I have to decide what I am going to put on the bare shelf above. Something less "busy" I imagine. 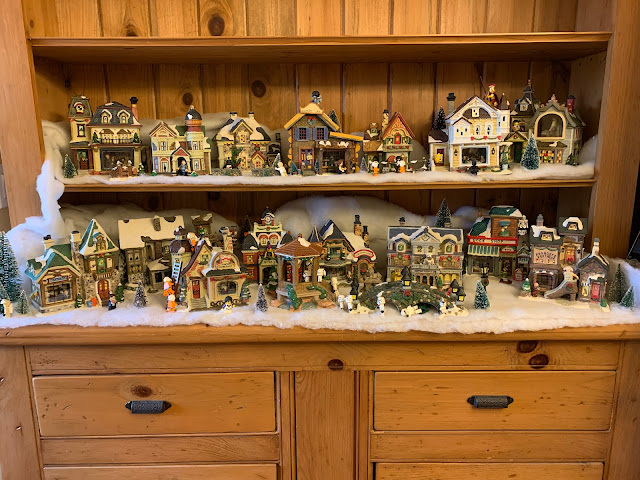 Husband, by the way, built that piece of furniture after we saw similar ones in P.E.I. one summer.

Onto the physical effort part of the post. As part of making my chronic back crap feel better, I roll around on the floor and do physio stretches and strengthening exercises. I also decided some overall increase in activity would be good now that most of my recovery is behind me. I'm not the only one in the family with an expanding middle: 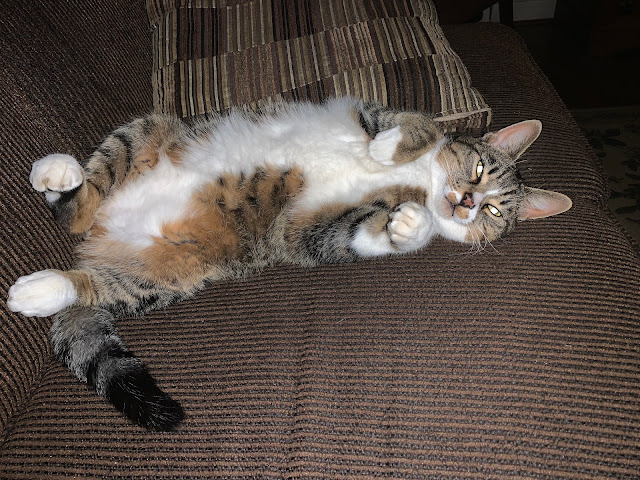 When I unroll my yoga mat to prepare to do my stretches, this happens: 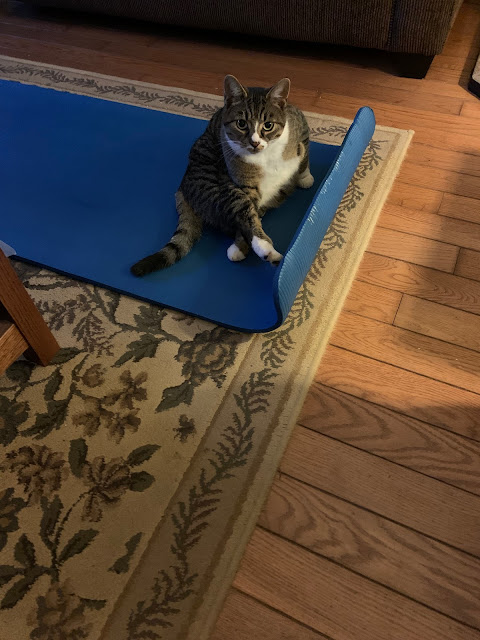 The first time I decided to use the treadmill for walking because "outside" was too cold/snowy/wet/windy, this is what I found: 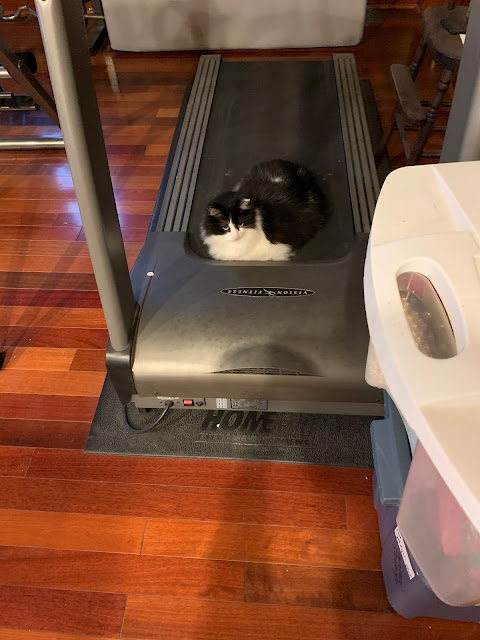 Again, not helpful, Scooter. (Excuse the two Christmas storage boxes... it's that time of year).

Have a great weekend, all.