You know, as I was typing that really creative title, it occurred to me that it’s something I’ve done almost daily for 31 years. I started by printing in white chalk, or sometimes coloured chalk if it was close to a holiday, on a blackboard. Later, I used dry erase markers on a white board. Every day, Monday to Friday, and if I had grade four that year, I also wrote it in cursive. Grade four or late grade three is when students learn how to write versus print, although I wonder if that will change altogether with everyone using keyboards or other forms of technology to communicate.

I remember really working on my “ hand writing “, deciding what I wanted my signature to look like. You could tell who wrote what according to their writing style. Will young kids even do that anymore? But that isn’t even what I was going to post about.

It’s been snowing gently on and off and it’s quite pretty. It makes me feel all cozy and Christmas-y. I could even start decorating but alas, my back (s.i.joint pain- my old nemesis ) is making some things rather tough at the moment. I blame this on having to sleep in awkward positions and lack of movement during my cancer ordeal and subsequent recovery. However, it’s nothing that targeted stretches and Physio appointments won’t solve.

Yesterday and today I’ve been enjoying my new read. 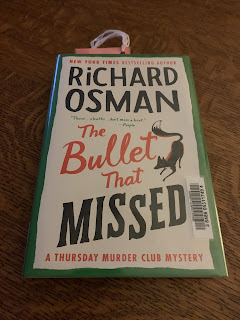 I’ve read Osman’s first two books in this series and I’ve gotten to really like the characters.

I like to be in the den on days like these as the wood stove has been kept burning and it’s such a nice spot. 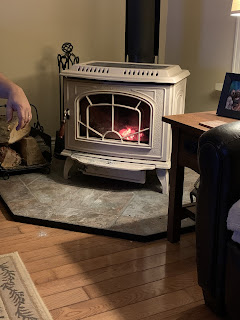 Ignore the ashes that haven’t been swept up yet. It’s kind of an ongoing task. We chose that cream coloured stove years ago and it’s one of my favourite things in our old house.

As I’m typing this, husband is watching a video on YouTube about the making of the movie, The Battle of Britain. He adores movies like that, almost as much as he adores Hammer films (old Dracula and various other monster movies). Our daughter jokes that it’s like her dad is studying for a test on World War II.

I’m not so much of a movie person. I watch more tv shows than my husband does. My slightly ADHD brain is better with hour long mysteries that I can fast forward through the commercials. He also has favourite movies that he enjoys watching over and over again. The only ones that I can do that with are funny Christmas ones and Monty Python movies.

We have, however, found common ground in watching the newest season on The Crown on Netflix. I realize it’s likely not completely accurate, but I like it regardless.

And there you have what’s floating around in my brain on this snowy November day.

I am a wife and mother of a twenty-six year-old and a twenty-two-year-old living in rural Ontario, Canada. Join me in my journey through gardening, motherhood, living in a century-plus home and being newly retired as of March, 2021. I love gardening, reading, nature, laughing, small furry animals, and a good cup of coffee on the porch (or perhaps a glass of red wine depending on the day!).