What to listen to While Walking on the Treadmill

Now that my back is starting to feel better, I am trying to walk every day. When I first started, I literally could do about ten to fifteen minutes on the treadmill and I had to stop because of the pain in my S.I. joint, etc. , but little by little and with tons of stretches and exercises and acupuncture and massage, I have been increasing my walking, sometimes just by one more minute a day.

Walking on the treadmill is incredibly boring, even for just fifteen or twenty minutes, so I have been listening to music that I have gathered on playlists. I do this on Spotify for which I pay about ten dollars a month so I can listen without advertisements popping in every couple of songs. I am picky about my songs. I don't like playlists that a suggested to me. However I am now getting quite tired of my playlists, too.

I am not a podcast person. I don't like suggested podcasts. I don't need podcasts to listen to during the day just to fill the void, nor do I need them while driving somewhere (because let's face it, where am I driving besides the grocery store and the physiotherapist?). I do, however, need something to listen to while walking on the treadmill.

I remembered how much I love the shows (do you call them shows? ) that Terry O'Reilly did on CBC radio called, "Under the Influence". Here's the link to where you can find them. O'Reilly was an advertising copywriter and had his own advertising company. He puts out the most amazingly interesting podcasts / radio shows about marketing and advertising, including information about well known ad campaigns, or products, or people who promoted products. I have never been bored with any of the ones I have heard on the radio. They are just filled with neat facts that you never knew before.

Tonight I listened to one about products that were named after the people who invented them. It was called Brands are People Too.  It was so interesting! O'Reilly has a great delivery too.

Each podcast is about 27 minutes long which is just about the most I can walk right now, so it's perfect. Now, honestly, when people recommend something to me that I "just have to listen to" or "just have to read", I almost never do. I like to decide for myself, or discover for myself. I don't even like it when husband reads some bit of news that he's discovered. I usually reply, "Yes, I know. I have the same news feed that you do." So obviously, it's up to you. Listen, or don't, but I'm glad I now have oodles of interesting things to listen to that I won't likely become bored with any time soon. 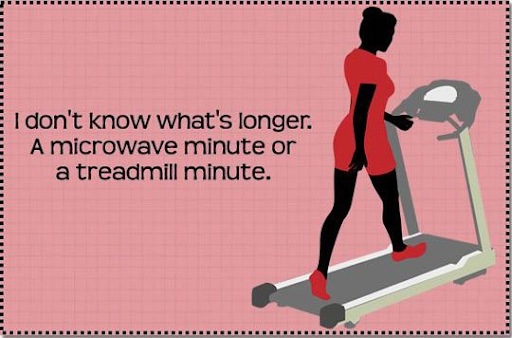 Email ThisBlogThis!Share to TwitterShare to FacebookShare to Pinterest
Labels: treadmill, Under the Influence