Swiss Family Robinson - had to look into it further...

So, after reading comments on my previous post, I was wondering if I was wrong about it being Canadian, so I looked up Swiss Family Robinson, tv show and yep, it was. Here is an image to help jog your memories: 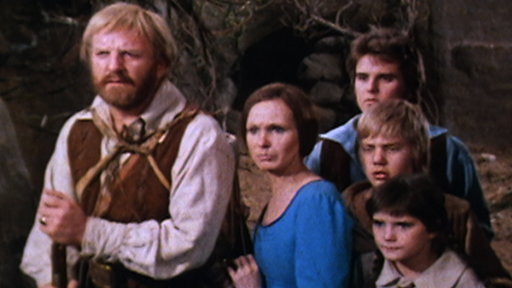 Upon further investigation, I found out there was only one season, 1974-75. Beach scenes were filmed in Jamaica and jungle scenes were filmed in Kleinburg, Ontario!!!! Trust me when I say that Kleinburg is not natural jungle habitat! It's an artsy place, however, with a famous art gallery. But... hold on to your hats all you Canadians of the same age... guess what else was filmed there??? The Forest Rangers and Littlest Hobo! How many horrible episodes of both of those did I watch as a child?!?
The actor who played the father, Johann Robinson, was Christopher Wiggins who was born in England. As well as acting, he did a lot of voice work, the least of which was doing the voice for Will Scarlett on Rocket Robin Hood! Could there have been a more quintessentially hokey series than Rocket Robin Hood??? But when you only got three channels, you watched Rocket Robin Hood.

And there you have a peak at some of my childhood. I also watched Mr. Dressup and the Friendly Giant, but that's for another post.
Posted by coffeeontheporchwithme at 3/26/2020 07:56:00 pm