Living Past 100 and Blue Zones

Last night on tv I was watching a programme about  being able to live well past 100 years of age. In this programme, they discussed how as long as the brain is working, we should be able to use "bionics" or robotics to do the tasks that our muscles and limbs would normally do. They showed a man in his 80's who competes in track and field events, as well as a woman who did NOT look 82 years old. Also, the programme spoke about Sardinia, Italy and an area of Japan which are described as Blue Zones. These, and other areas, are parts of the world in which people live much longer. Not only do they live longer, but they are healthier and able to continue to do things in their advanced years. 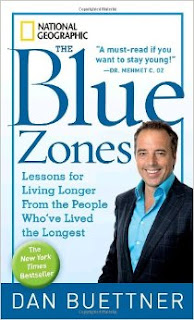 Some of the common denominators of  Blue Zone areas (I've read the book, it's excellent) are that people have a sense of community, they get together with other people, they don't live out their final years in isolation. Also, their diet is not one filled with processed food. They also use their bodies in purposeful ways everyday. For example, they may walk everywhere, or sit down on the floor and stand up again multiple times a day, or they may machete the undergrowth that encroaches their yard all the time. These elders do not lie in a bed and watch tv day after day. They get up early, boil water, perhaps cut some firewood, walk somewhere, meet with other family members, eat fish or vegetables, or drink red wine, or tea. These people have a reason to get up in the morning.

The tv show really had me thinking (as did the book when I read it a few years ago) about aging. I am currently 49 years old and dealing with all the usual 49 year old female stuff where I swear I am forgetting everything and I feel like an "old woman" when I get out of bed in the morning. My job is mentally exhausting and I have no energy by the end of the work week. I get scared that I won't have enough energy to enjoy life to its fullest upon retirement. I worry about how I feel physically right now. If I am "creaky" and achy now, what will I be like when I am in my 50's, 60's, 70's and beyond.

Do people really want to live past 100 years? What would your life be like? I suppose if all of your friends and family members also continued to live longer, it would be better because then you would have them to share experiences with. I would not want to live to be incredibly old if my health was failing. I've seen far too many people in nursing homes whose failing brains did not allow them to recognize their own children. They could no longer walk on their own legs or feed themselves. To be curled up on a bed unable to communicate and depend on someone else for every function would not be the way I would want to exist for many years beyond the normal life expectancy of humans.

I don't know if I am odd in this, but I always read the obituaries in my little small town newspaper. I always want to see how old people were. I am fascinated by the people who live a long time, but are still vibrant, contributing, mobile, interested people. I want to know what makes them tick. I want to know why they were able to carry on a long, healthy life, but others have not. Is it just good genes? Is it about never really "retiring", but instead being busy and involved in many things?

Sometimes I think that when I retire and get rid of job stress and mental exhaustion, that it will be a chance to really "live" and spend time the way I want and go places, do things, or maybe do nothing at all for a while and experience quiet and blissful laziness (although I don't think I could do that for very long).

Do you know someone who lived to a ripe old age and had all of their faculties about them, continued to drive, do things, go places...? What was their secret?
Posted by coffeeontheporchwithme at 11/06/2015 05:47:00 pm