This past weekend was quite busy. Our daughter in university texted us saying that she was feeling a bit homesick and could she come home. She does not have a car at university, so we would need to pick her up and take her back. So my husband left right after work on Friday and drove to the city in which her university is located, which thankfully is only a little more than an hour and a half away. The weather reports were calling for some substantial snow, but that sort of thing doesn't really bother my husband.

So, our daughter was home with us Friday evening which was fairly uneventful with everyone being tired by the end of the week, and son playing basketball. He is now learning the hard way how braces and an arm to the face don't go well together. He spent the weekend nursing the inside of his mouth which got a bit torn up by his braces.

When I got up on Saturday morning, I was greeted by this:
That was A LOT of snow that fell in a relatively short amount of time. We went to a nearby town to do some shopping and the snow continued later in the afternoon, and like every year before this one, the first significant snow was not removed by snowplows until the next day. We had a tricky drive home!

When I was grocery shopping Saturday morning with my daughter, I saw what I can only describe as my own personal Christmas nightmare. 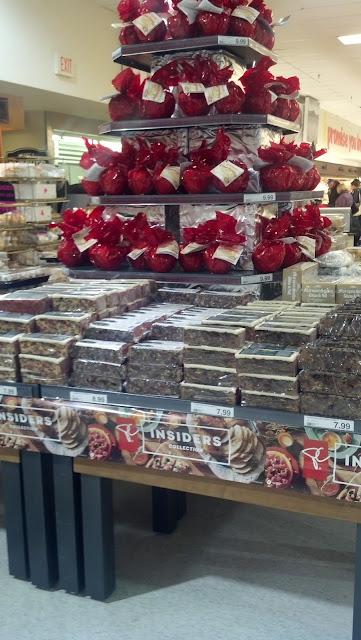 Yes, it is a huge display of fruit cake. I know, I know... there are lots of people out there who like, maybe love, fruitcake. I am not one of them. I think of fruitcake as a gift that you give to someone you hate. I remember as a child seeing slices of fruit cake and thinking all those colourful pieces of fruit and that lovely thick white icing on the top must be something sweet and wonderful. Then I would take a bite and it was everything I could do to keep it in my mouth and swallow it. I guess I am just not equipped with the right "fruitcake tastebuds". I really think the world can be easily divided into two categories of people. Those who love fruitcake and those who hate it. I don't even think there is an inbetween.

Anyway, the rest of the weekend was spent with close friends, eating my first ever whole chicken I made in a crockpot (pretty good, very moist!), and driving my daughter back to her university town , thankfully on cleared roads with not much snow in the air.