Time marches on. The temperature yesterday was 24 degrees celsius. Glorious. However, as I was doing some yard work, I realized my body is not used to this. I changed into lighter clothing and still had to take multiple sit down breaks. Not to worry, it's going to snow on Wednesday, so I won't have to concern myself with over heating.

Husband continues to plug away at the "insulation / reduce the bleeding of money to heat this old house" project. Here is a new picture to show the next stage: 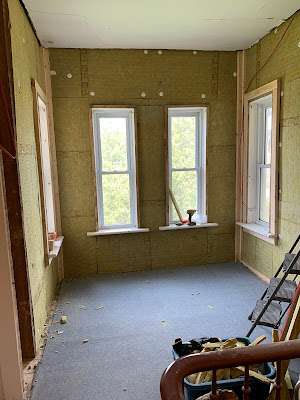 Framing and insulation has occurred. (Ceiling and floor will also be happening, this is a multi-multi-multi-step endevour).

Regarding the foxes, I have not seen mom or babies for a few days now. I read that mother foxes sometimes move their young two or three times, so perhaps that is what has happened.

I went for my first bone density scan the other day. My previous, now retired doctor never ordered one for me, regardless of my lower back issues and diagnosis of osteoarthritis in my lower back. When the nurse practitioner took over patients for a six month period, she ordered a whole bunch of routine tests, including this bone scan (for which I waited four months, I think). I got my results this morning. Yes indeed I have osteoarthritis in my lower back and also in the "neck" of my femur (looked it up, it's at the top, where it connects to the hip). Well, that would explain all of my pain and problems. So now I increase my calcium and vitamin D intake, even though I've always been a regular consumer of calcium and have taken vitamin D pretty consistently over the last several years. Also, this is hereditary and I recall my mother taking calcium in her later years. Menopausal women also basically leach calcium as estrogen subsides. Yay, us!!

Our daughter finally, finally, finally gets to walk across a stage at university and celebrate her well earned graduation with a degree in Communications. She's already been employed full time in her field for over a year now, but of course with the whole pandemic thing, she, along with many others, never got to graduate in person with her course mates. She only gets to have two extra guests. Her long time boyfriend is writing an exam for a course he has been taking this same day, so husband and I get to go and watch this event.

Son is now done his college course and we will be helping him move home this coming weekend. He has a big pickup truck and we have an SUV, so hopefully we will manage this all in one trip, as it is about three hours away. It will be odd having a "child" at home again, but I'm happy that he will be able to save some money and try to do some earning before striking out on his own. He's twenty-two years old. When I was that age, I was still in university. Of course, I had grade 13, which doesn't exist now. As well, I and most of my peers thought getting a university degree was the necessary next step after high school. I did a four year combined honours BA, followed by a year of teacher's college to get my B. Ed. But that was thirty years ago. Our son saw how many people were going to university only to not get jobs, or to then turn around and go to college AFTER university to get some sort of employable skill. He had no desire to become a doctor, lawyer, teacher, etc. which all require degrees, but instead wanted to get out there and make money. We have a huge nuclear power plant relatively close by and he found out what he needed to do to get a future job there and did it. He still has some steps to take in order to fulfill his final career choice, but he's on his way. And if he is successful, he may earn more than husband or I ever could have imagined as teachers. I wish him all the success and he's never been one to be afraid of hard work, so I have a lot of confidence that he will be fine in this world.

On a final note, our strange little cat Murphy has decided that he enjoys hanging out with the chickens from time to time. They don't even seem to care! 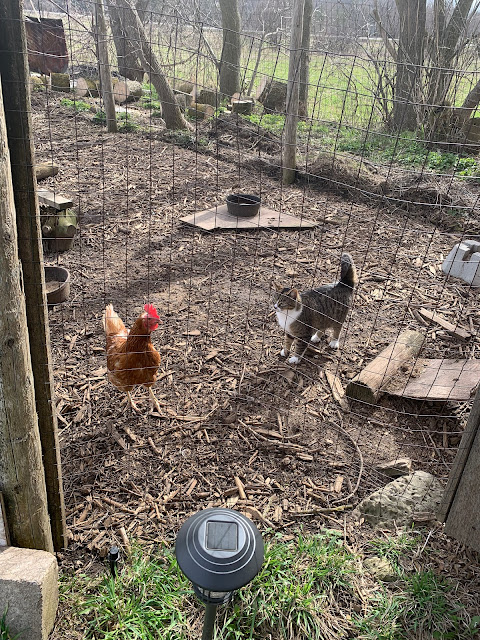 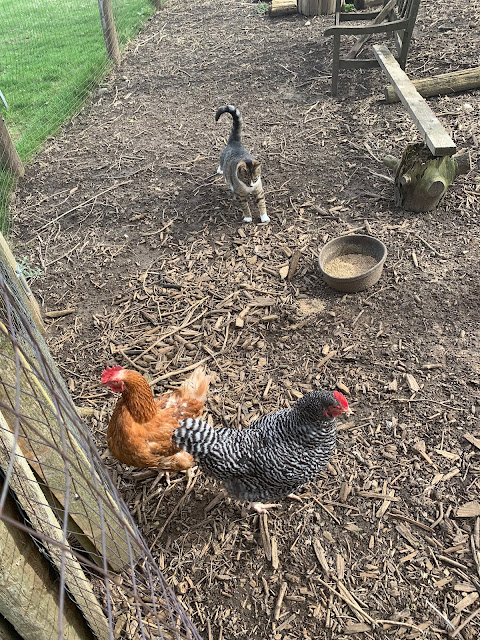 Oh, also, has anyone noticed that things look different when you try to leave a comment on someone's blog? Ughhh, Blogger, just leave things alone. Anyway, have a lovely day. Let me know how your bone density is and if you are also having sun / snow /sun / snow.