Didn't Quite Catch That

I finally dragged my body to the treadmill, armed with my knee support and my NEW (!!) phone, and started walking. Yes, we have a treadmill. No, I don't use it much. When I do, however, I have to have music to listen to. I was introduced to Spotify by my children and I pay nine dollars and change a month so I can make up playlists and listen to them without ads interrupting me every third song.

I have one playlist called "Workout". It consists mostly of music of my high school and university days. So if you were born in the 1960's, perhaps you can relate to this. A song came on that took me right back to an old boyfriend and a tape we listened to a lot. It was "Burning Down the House" by Talking Heads. As the song proceeded and I imagined myself getting fitter and healthier with each step, I realized that I had no idea what half of the lyrics were saying. I never did. 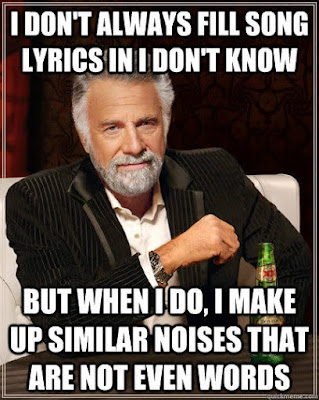 In fact, there are so many songs that I listened to over and over and didn't know what they were saying! I used to buy used albums at a used record place when I was in university. I was going through a Beatles phase. I loved it when some albums had the lyrics, so you could actually sing along correctly. Yes, some tape cassettes also had the little fold out insert with lyrics as well. But most of the time, we just sang the parts we knew and didn't sing when it came to the parts we didn't. Or we sang the wrong words.

Another song I never knew the words to was Bruce Springsteen's "Blinded by the Light" (yes, yes, I know, for the purists out there, it was Manford Mann originally). I think that one confused a lot of people.

What about you? Did you have a song that you never could figure out the words to, or did you realize years later you were singing the wrong words?