It was hot and sunny five days ago. This morning when I rose, it was 1 degree (celsius). Since then we have had a couple little snow showers. This is not unheard of in April. I was looking back at posts from this time last year, and it snowed on May 9th (adding insult to injury).

Locally, our cases of Covid have gone up a lot (for us, we've always had very low numbers and few worries). The medical officer of health (who has been in the news recently concerning his higher-than-any-other salary) chastised those who have gathered recently (with a particular shout out to highschool students) and aren't being truthful about how many contacts they have had. In order to take care of contact tracing, he has decided to take personnel from the vaccine clinics and have them call people about possible contact instead. Because of that, the vaccine clinic is cancelled. Other vaccine clinics in various parts of Ontario are also being cancelled, but that is due to lack of vaccine supplies. Hmmm. We (Ontario) are already so far behind in our vaccination roll out that this has caused quite a hullaballoo.

Blogger is as "social media" as I get, but daughter (whose job involves local communications) informs me that the comments are extensive. Sigh. If there is one thing I've learned from the t.v. series, "House", (and from my own experiences), it's that most people lie. Of course many teenagers are going to lie about being at a party with a bunch of other people. I am not excusing it, I'm just not surprised in the least. However, to blame teenagers when there is a "local" company that employs more than 4000 people that never seems to be presented in a bad light, doesn't seem particularly fair.  I am also not surprised that our numbers have gone up. People are just plain tired of it all. Again, not excusing, just not surprised. As well, when a huge number of people still have not had access to vaccines, and variants are spreading, it's not suprising. Our Prime Minister may be known for his good looks and soft voice, but he hasn't impressed his citizens by being on the forefront of vaccine acquisition. So, locally we are being told to stay in our homes.

One year and one month. Enough said.

On a different note, I planted some seeds. 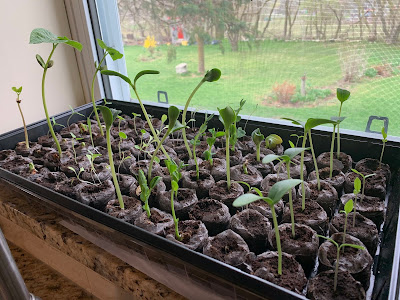 They're coming along. I don't know if I'm too early, or too late, but that's what I have so far. I have a little "map" I made so I know what's what.

On a chilly, dreary day, here's where you can find Scooter-the-cat-with-no-tail. 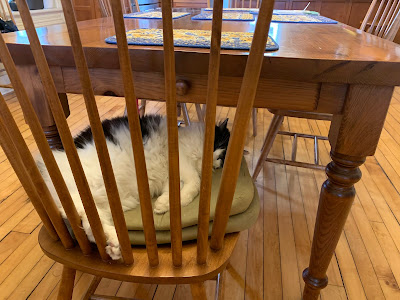 This is the only chair he likes. It's son's chair. 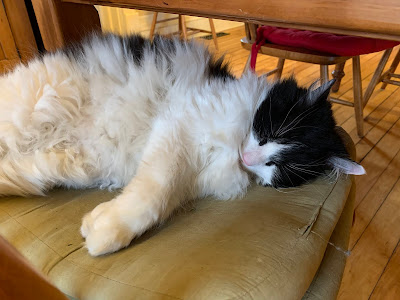 And to round things off, here is a harbinger of good things to come, my bright yellow forsythia. 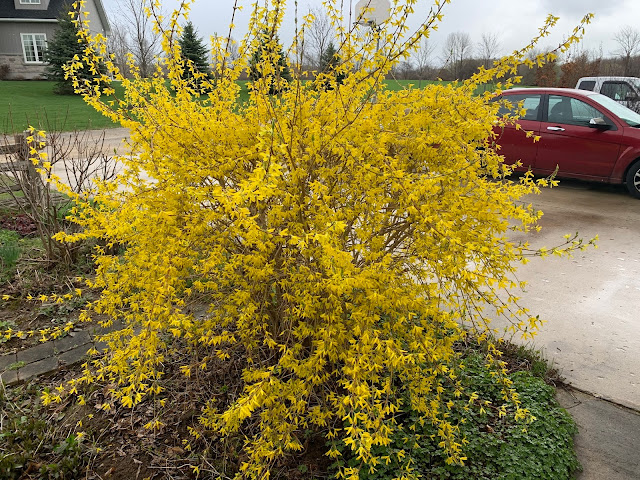