Boots on May 9th

One should not have to wear boots to go out and feed the chickens on the morning of May 9th. One did. 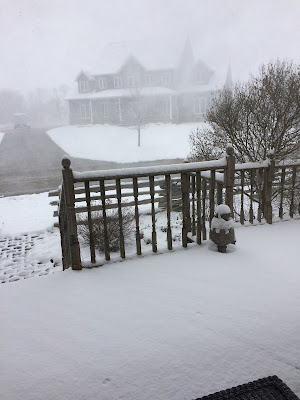 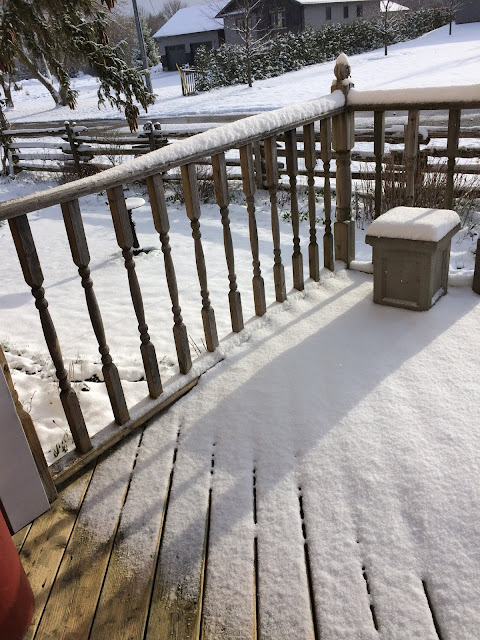 Both photos are accurate. Sometimes it was a little sunny, and then sometimes it snowed.
The tulips haven't even opened yet, but there are some very sad daffodils underneath that snow. It did mostly melt by later in the afternoon, but the wind was cold and I've had enough, thank you very much.

Life continues in pandemic world. I'm still putting out learning activities for kids to access in a virtual learning environment. Daughter has been fortunate (but her personality and skills and past work history obviously helped) to land a job again with the county in their communications department for the summer. This is a position that she can do from home and was given a work computer on which to do her thing. Sometimes she's having virtual meetings while I'm having virtual meetings in another room. Son was hoping to get a landscaping job this summer. It's good money and full time and no weekend work. That was before all of "this" happened. But then the Ontario government said that landscaping was one of the sectors that could start up again with the re-opening of the economy. He put in his resume (online) but has not heard back yet. In the meantime, his previous place of employment asked if he could come in and help with the garden centre, so he has picked up some hours in the last couple of days. I am happy that he is in open air and things are very controlled there.

Made a ham today. That's exciting.

Daughter turned 24 last week. We just had "us" to celebrate, but she wanted and got the required homemade chocolate layer cake, and some steak and shrimp. Balloons were hung from the light fixture and the Happy Birthday banner was hung - a must.

Here is what I have learned about myself in these past eight or nine weeks:
- I get bored easily, but not so bored as to be motivated to do a thorough cleaning/ revamping / reorganizing, etc. that other people speak of in these times.
-I actually like my job - the process of leaving my home, going to work, being with the kids and my coworkers and having something different to do every day. I miss it. Retirement is not going to be easy and I definitely need a game plan.
-I can "get in my head" too much and that's not always a good thing.
-I can still learn how to do new things.
-I do not like online grocery shopping and much prefer choosing things depending on what looks good, what's on sale, and what I might put together for meals for the week.


Last night when husband and daughter were watching a movie that I wasn't interested in, I watched something on Netflix called The Pharmacist. It was three episodes, I think, and it was so very good. It was a documentary about a pharmacist who made it his mission to do something about the prescription opioid crisis. I highly recommend it, if you think that might be something you are interested in.

Tomorrow is of course, Mother's Day here in Canada. My own mother hasn't been around for many years now. My husband's mother is in a very nice Long Term Care home. Nobody is allowed to visit, but we will call her. She is healthy and they are being extremely careful over there. For myself, it's a different time right now, so my request was I don't want to make food. I'm asking for take out pizza from a small pizza place in a little town close to us, and a Dairy Queen smarties blizzard from a different small town close to us. I'm good with that. Oh, and no snow, please.
Posted by coffeeontheporchwithme at 5/09/2020 11:22:00 pm