The Gales of November

Man it was windy last night and this morning!! It was just a miserable, wet, very windy day. However, all the snow has gone (the header picture is from a little while ago) and the temperatures were actually mild (for late November). Here and there, people lost their power due to trees falling on hydro lines.

Today, I had an appointment at the orthodontist. I am now in the third week of Invisalign (clear trays that do the same thing as braces). I wish I could say it is all fine and dandy, but alas, by the end of the day, the rubbing on the inside of my bottom lip and a couple spots on the top still cause me pain. I have an arsenal of treatments that I do to try to help my mouth heal and guard it from further distress. If I could just rest it and not talk, I'd likely be much better, but it is rather hard to teach a class of kids without moving one's mouth. I told the good people at my orthodontist clinic about this and they were surprised and said nobody's ever complained about this particular discomfort before. Funny, there are plenty of people on the internet who have.

Regardless, it was time to have the "buttons" put on my teeth. I had 14 of these little square protruding things chemically attached to the outside of my teeth. They match little bump-outs on my Invisalign trays. It is all part of forcing my teeth in the directions they are supposed to go. Because they are brand new, these little buttons (evokes kind of a cute image) are sharp as hell and rough like sandpaper. So, when you pry your trays out of your mouth to eat, the action of chewing now shreds new "death by a thousand cuts" in other parts of my mouth. I've read (because you must google these things) that the act of removing and re-inserting your trays helps to smooth out these nasty protrusions over time, so they become less deadly. I can't wait.

However.... all was not lost. My drive to the orthodontist is about a half an hour through the countryside and I saw no less than THREE snowy owls!! I was so excited. I pulled over and took a picture of one on the way there. I saw another one, but did not take a picture. Then, on the way back home, I saw three of them, so I did stop for more pictures. No doubt, these were the same ones I saw both ways, but still very exciting! I wonder if they are related? They make me think of Hedwig from Harry Potter. The extreme wind had died down at this point in the afternoon, but it was still pretty breezy. Despite that, they were perched high atop hydro poles, no doubt waiting patiently to spot some unsuspecting rodent. 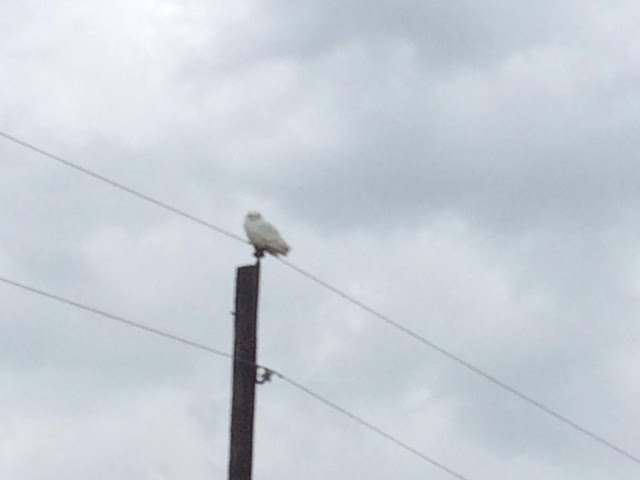 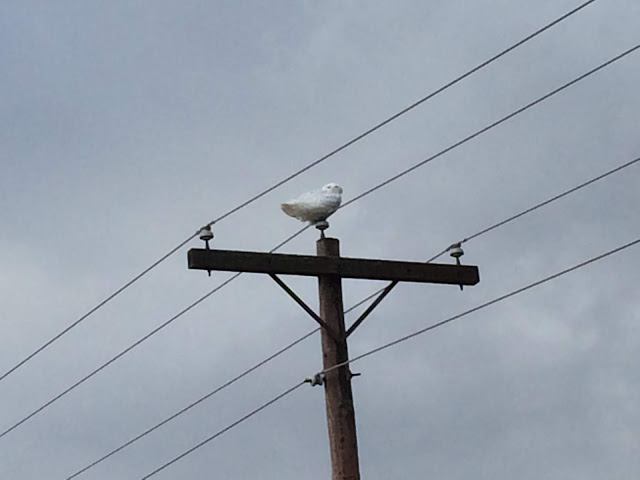 They didn't even seem to mind that I pulled my vehicle over, and for the one above, I got out and walked as close as I dared to take the picture. I had never seen a snowy owl before last year (I posted about it then), and now I can say I've seen a total of four!
Posted by coffeeontheporchwithme at 11/27/2019 09:59:00 pm