We have snow. We have a whole lot of snow. Here is my porch. Yes, that's a little bistro table. No, it has not been put away. It is November the 13. There should have been time to put that little bistro table away before this all happened. 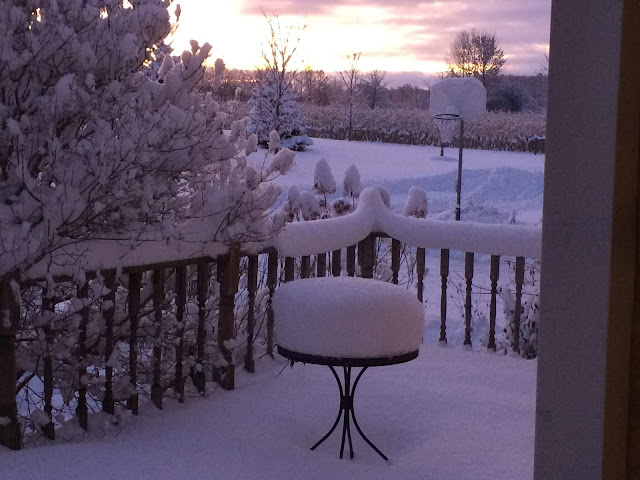 This is so very wrong. 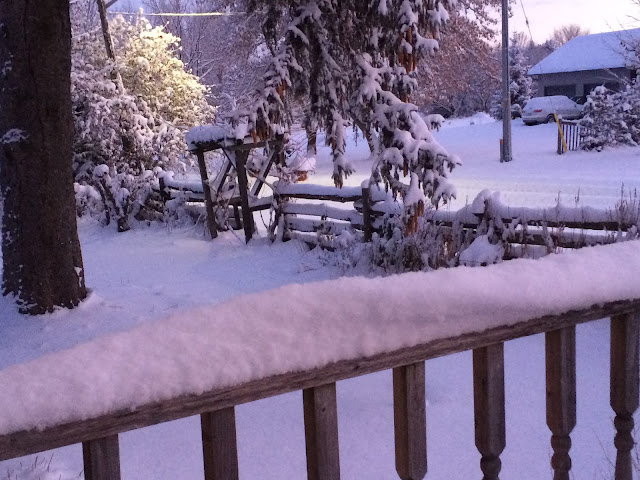 As I am writing this post at 10:02 p.m., there is still snow falling outside. Maybe it won't stay.


O.K., so that was the "Snow" part of my title.
Sometimes when I'm drinking my one cup of heavenly coffee per day in the morning, I sit at the computer and read the semi-news feed drivel that comes up on my computer. Sometimes there are "articles" that describe "Twenty things about Canadians that Americans Don't Understand", or some such thing. Often times, one of those things is our milk. We buy our milk in bags. In those bags are three smaller bags. The bags get put into milk pitchers, specially made to hold the bags. Then we snip a corner off the bag and pour the milk out as needed. This is normal for us. Here is my milk pitcher. 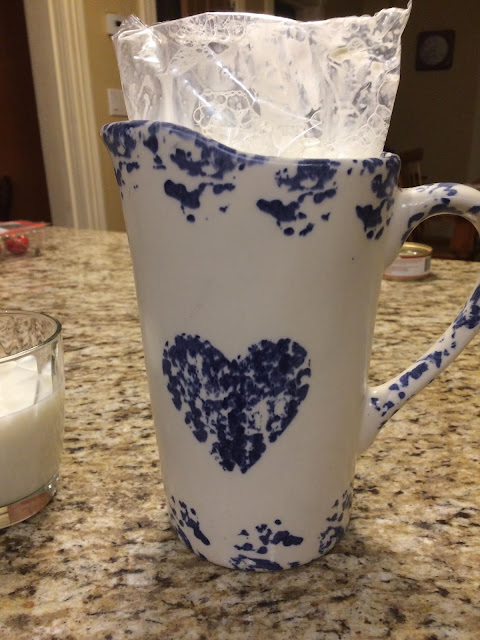 Teeth- I've never thought more about teeth than I have in the past two days. I have embarked on a quest that I should have done decades ago. But I'm doing it now. I am now the wearer of Invisaligns. Yes, I'm 53 years old, with "braces". I have always hated my teeth. My parents did not make a lot of money and I guess orthodontics was not part of my father's dental plan. To try to assist with my crowded teeth, my parents approved of the dentist pulling one permanent tooth when I was young (don't even know how old I was at the time) to make room for my other teeth. It didn't really work.

Life moved on, I was busy with my career, then kids came and I was busy being a mother and a professional, and even though I still hated my teeth, I didn't think it was something adults did. I saw it as an unnecessarily vain thing to do, I mean, who was I trying to impress? I was a married adult, with growing children.

Then, as retirement became a more tangible thing, I realized I still hate my teeth and my dental plan would be coming to an end fairly soon, so if I was going to do something, I'd better do it quickly. So I went to the same orthodontist that did my son's braces and asked for a consult. Yes, it could be done, and they could try and have it accomplished by my retirement date (year and a half - please do NOT tell more stories of people you know for whom it took three years to straighten their teeth - I don't want to know).

My teeth got scanned with some sort of advanced technology, the order was placed, and I waited for someone in, I want to say Costa Rica (??) make my Invisalign trays. I went on Monday to pick up my first two. I was shown how to put them in and was told all the ins and outs of having these things in my mouth. (If you are unfamiliar, they are clear plastic "trays" that mold over your teeth, top and bottom. Mine will be changed every week to a new tray which gradually shifts your teeth into a straighter position). In two weeks, I go back to the orthodontist to get these little "buttons" glued to some of my teeth which put added pressure on certain teeth to help guide things along even more.

Here's the thing. I'm a big baby about certain things medical and painful. But other things, I can handle. Mouth stuff doesn't really bother me all that much. I'm o.k. with needles, I drag myself into work under all kinds of less than perfect situations of pain or ill health. I really thought I would be totally fine with this - hey I'm paying someone to do this! I CHOSE to have my teeth forcibly moved around in my head. But here's the reality: this is no fun at all! I so want to rip these things off my teeth and run over them with my car. They are tight and make me feel claustrophobic, and I'm pretty sure I could have drowned in my own saliva the first 24 hours. That was day one. I truly didn't think I would be able to sleep with them in. Two Tylenol Night time for Pain tablets helped. Then two days of teaching, which essentially is talking all day long, and the edges of the trays have now worn away much of the soft tissue in my mouth that they come in contact with. That's also not a great sensation. I have googled things like" how long did it take to get used to your invisaligns" and "when do you start to get used to invisaligns". The results lead me to believe that I have a few more days until things calm down and it stops being the ONLY thing I think about. Ahhh, but then I switch to new trays and get to do it all over again. Did I mention I'm paying someone to do this to me?

You must keep your invisaligns in for about 22 hours a day in order to get the full benefit and results. If you eat, or drink anything other than water, you pry these things out of your mouth (I go to the back corner of the staffroom and turn my back so people don't have to watch me do this - it's not pretty), then you are supposed to brush your teeth before you put them back in when you're done. I tend to do a secret pick and floss with one of those floss things with a handle (again, people really don't want to witness that).

Can I just say that the happiest time of my day is when those things are off my teeth? Oh, but then when I try to chew my food, it is now like I am using someone else's teeth to do it. They don't feel right. They may not feel right for another year and a half.

I also feel like I might now refer to this as the "Invisalign diet" because you really have to decide if it is worth the hassle to mindlessly snack on something. I'm seriously wondering if I drink my red wine through a straw, maybe I won't have to take the trays out.

The thing that really hit home for me, was when I realized that an eight year old girl in my class also has invisaligns right now. I told her we could be Invisalign sisters. (I did ask her, "So how long did you have them before you got used to them?" Her answer was "two weeks"). Oh well, once I'm done all the bellyaching and they stop being a form of torture, I will be so pleased to gradually see my teeth become something I don't want to hide behind my hand when I laugh, or close my mouth on when I smile for a camera.
Posted by coffeeontheporchwithme at 11/13/2019 10:41:00 pm