When I was into "clean eating", I learned how to perfect these. Now I make them because I'm always wanting to use up some more eggs, and they are so darn tasty!

First, measure out 1/4 cup of dry oatmeal into a small mixing bowl. I use whatever "quick cook"oatmeal I have on hand - cooks in 1 minute, or instant... it doesn't matter.

Then I pour in a little bit of water that is leftover from the kettle. It's often still warm, which I think helps to soften the oatmeal a bit first. I don't really measure, just enough to wet the oatmeal. Then stir it around with a fork. At this point I also add a few shakes of cinnamon, stirring that in.

I use our own chicken's eggs, so they are probably what would be considered "large" size, but again, it doesn't matter. Do you know the easiest way to separate yolks from whites? Crack your egg and separate it into two halves. Pour the contents of the egg from one half to the other, while letting the whites pour out and keeping the yolk in the half of the shell. It may take a couple of back and forths from shell to shell to fully separate, but it works like a charm. Don't worry if a little yolk gets in there. Either dispose of the yolks or keep for some other purpose in the fridge.

Stir the egg whites in with the oatmeal, water, and cinnamon. Mix with a fork until thoroughly combined.

Pour your mixture into the frying pan and allow it to cook over medium-low heat for a few minutes. DO NOT TRY TO FLIP IT UNTIL IT IS NICE AND SET, ALMOST A LITTLE BIT CRISPY AROUND THE EDGES.  Honestly, just let it sit in the frying pan and cook. Walk away, check your phone, feed the cat... don't try to flip it if it's still a little bit soft and runny.

When it is browning up and the edges are a little crispy / firm, use a wide spatula to flip it, just once. This side won't take nearly the same amount of time to cook, so just give it a minute or so. It should come off looking like this: 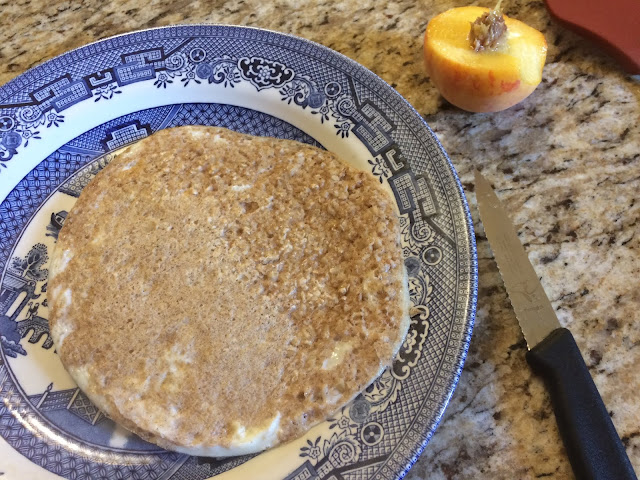 This is not a light fluffy, cakey type pancake. It has the nice nutty texture of the oatmeal and an almost custard quality to the eggwhites. It's as if an oatmeal cookie married a custard. 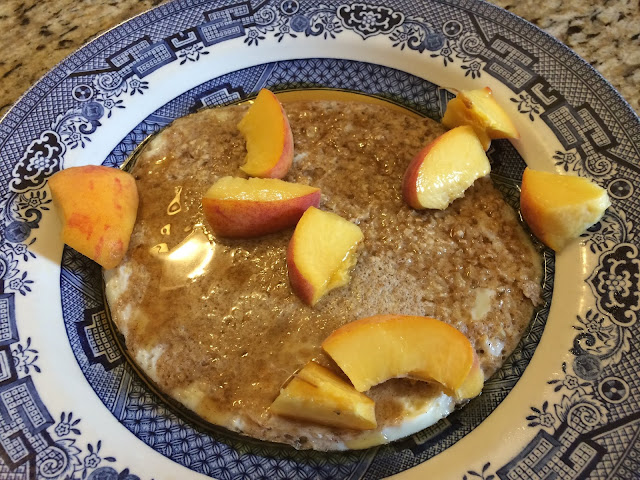 Depending on the season, I might slice strawberries on it, or have fresh blueberries. However, right now it's peach season, so this is about half a peach cut up, with two tablespoons of maple syrup (actual maple syrup). For those of you who might be concerned, the pancake itself is 126 calories. Shown my way with the syrup and a half a peach it is 265 calories altogether.

Speaking of peaches, why is there such a limited window of opportunity when it comes to peaches?? One day they are sitting there, all lovely and pinky orange, just perfectly ripe and ready to eat, juice dripping down your chin. The next day they are moldy and grey at one end. I do take them out of the basket after I buy them and set them separately on a large serving platter. Doesn't seem to matter. Don't tell anyone, but I just cut off the yucky end and eat the rest! (But I wouldn't serve that one to you if you came for a visit).
Posted by coffeeontheporchwithme at 8/20/2019 01:08:00 pm