Some people are griping about the heat, but honestly I would like to be able to soak it up and store it for January. I've been kind of a lazy blogger lately, not a great deal going on, so I thought I would just walk around the yard and see what's what. (How's that for excitement??) 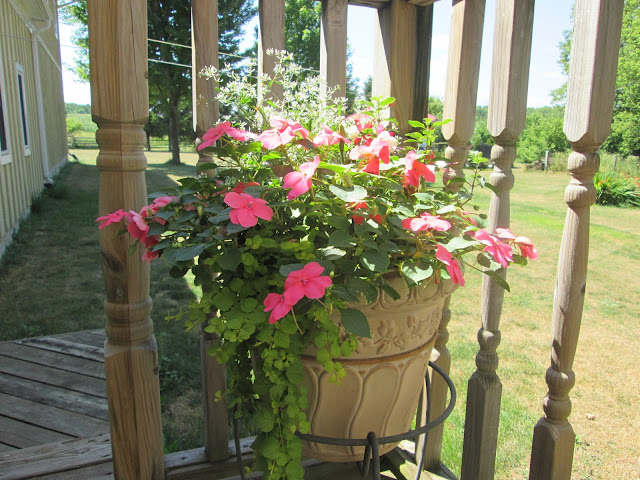 First stop is the back porch where I have this planter filled with creeping jenny, fuschia, some sort of whispy white filler, and impatients. It is very soft and feminine. If you look past the porch, you can see the yellow crispy grass / weeds that is our lawn. We got rain a couple of nights ago which filled up the buckets under the downspouts, but wasn't enough to bring the lawn out of dormancy. 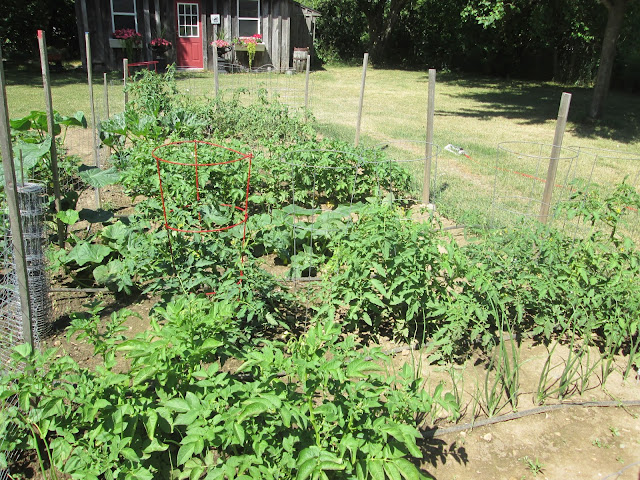 My little vegetable garden is coming along pretty well. I have used  soaker hoses, but had to narrow it down to just one because the other one blew a substantial hole in it. When a soaker hose has a big hole, the rest of the hose, farther down the line doesn't drip much water at all. I tried fixing the hole with $10 "super tape" (or whatever it was called) and the super tape was not so super. So far the only harvest I have had is one zucchini and one cucumber. 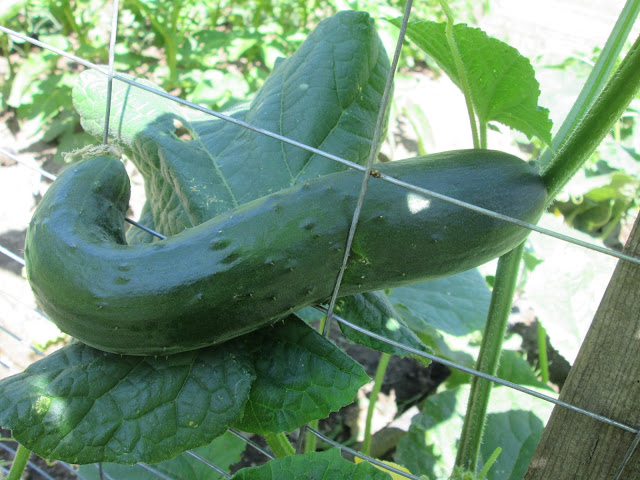 This cucumber plant is growing up my rabbit fence. The picture may not show it perfectly, but this cucumber is growing around the wire, with a dent in it. 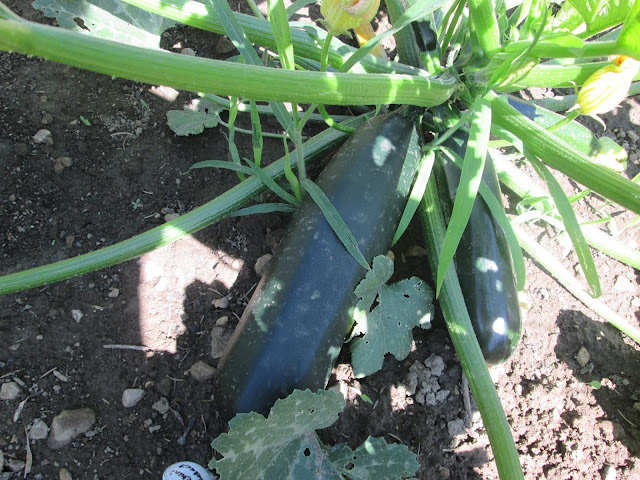 Oh dear. That one seems to have been hiding on me. I don't usually like to wait until the zucchini are that big! Stuffed? Grate it for zucchini bread? I don't have one of those neat "spiralizer" gadgets that people now use because real spaghetti is the devil.  (Oh ya, on that note, no I am not gluten free anymore. The pain of inflammation is most definitely still there, gluten or no gluten.I think I just must have a broken tailbone that every medical professional seems to have missed, or maybe I am growing a tail...) 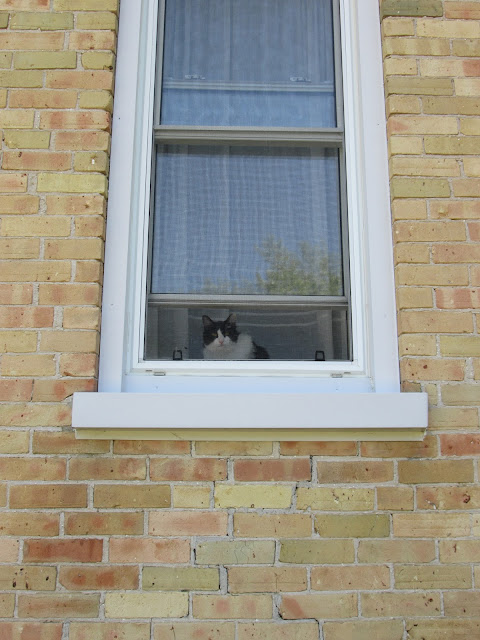 While I was out at my garden I heard a pitiful meow. That is Scooter in the bathroom window. I guess he was all done drinking from the toilet. (No, I don't condone this.) 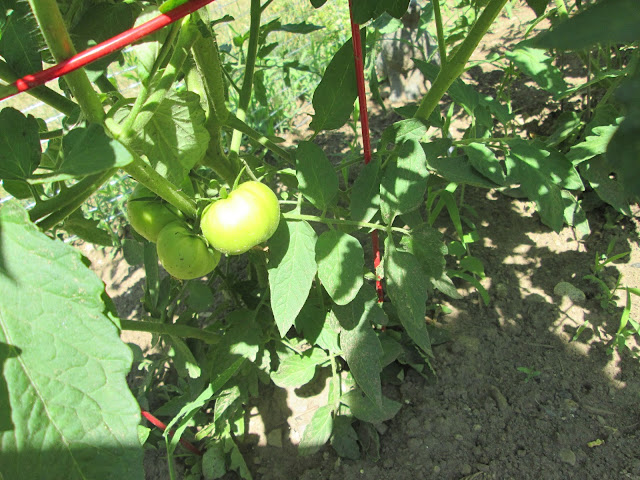 One last vegetable garden shot. I have had the worst luck with tomatoes for the last two years, so it is wonderful that this year's crop seems to be doing fine and there is promise of lovely, warm, right off the vine tomatoes. (Husband and I could eat toasted tomato sandwiches 'til we scrape the skin right off the roofs of our mouths). 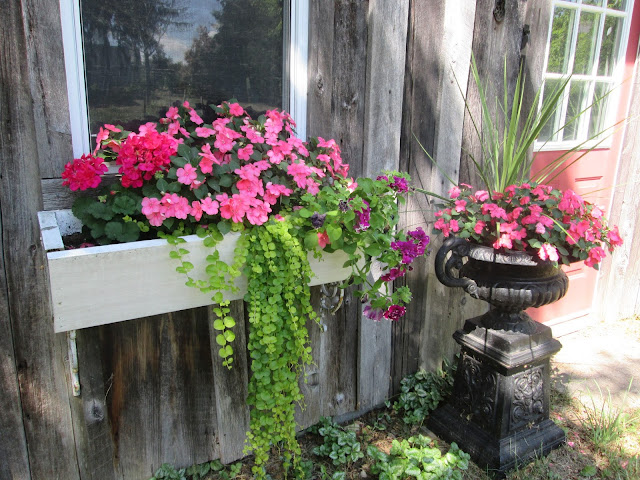 Next stop, the shed. These planters are doing very well. Creeping jenny is just so nice, isn't it? The window boxes were inspired by a trip to Prince Edward Island years ago. I saw so many pretty window boxes as well as shrub/ perennial borders. The cast iron urns (there is a matching one) are from ages ago and have had different locations on our property over the years. 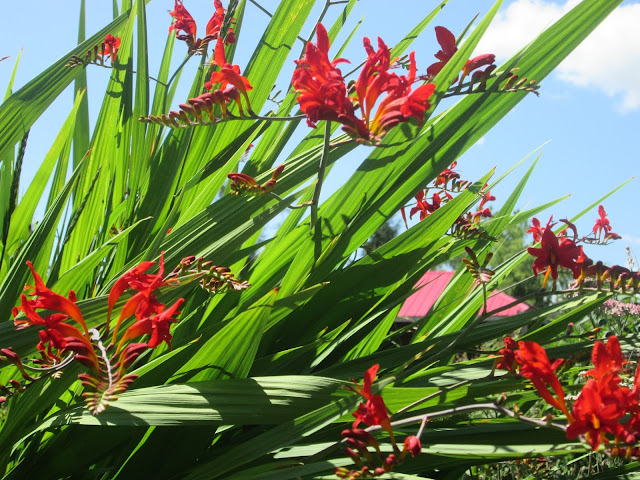 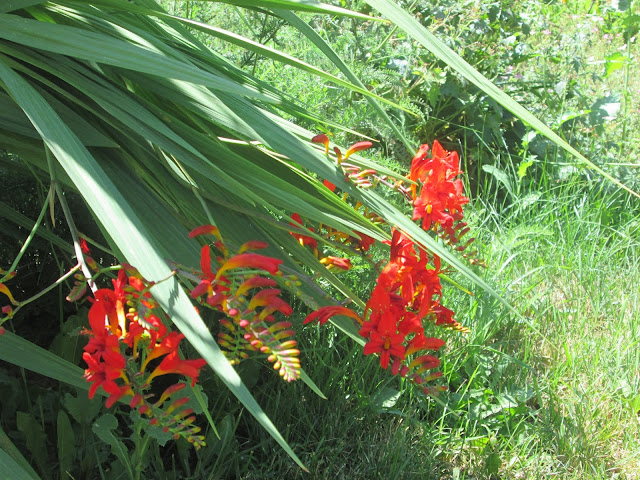 Oh how I love crocosmia!! They look so exotic and tropical. They grow in a perennial bed that I call "the hot bed" because the colours are "hot" (oranges, reds, fuschias...) and it is showy at the hottest time of the summer (now). 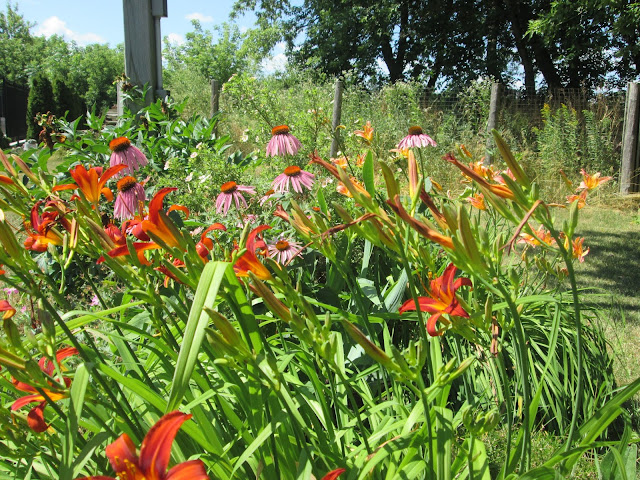 This is part of the hot bed with daylilies and Echinacea. I love how the middle of the Echinacea (purple cone flower) matches the orange of the daylilies. 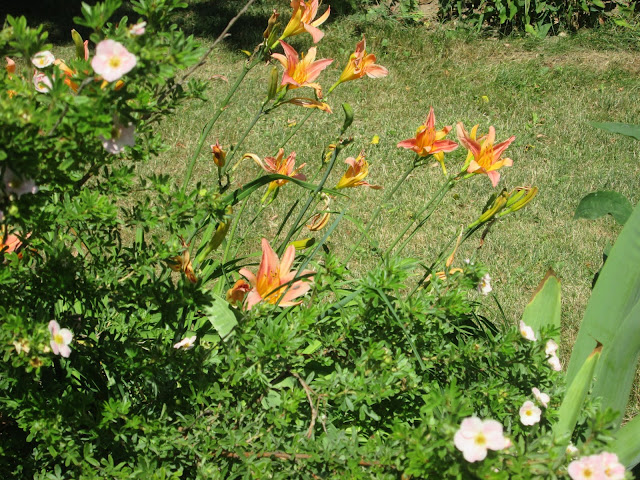 These are daylilies growing by a pale peachy coloured potentilla. I've thought many times of ripping that potentilla out because it is rather boring, but then it blooms and I just don't have the heart. 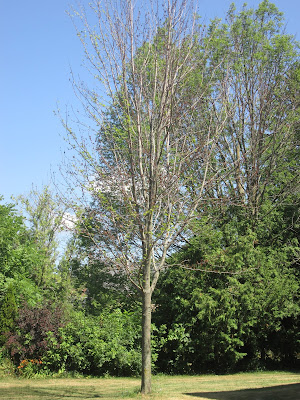 Here is a sad picture. This is one of our maple trees that we had planted several years ago. It is quite a big tree now, although it is hard to tell in the picture. It is dying. Barely any leaves came out in the spring and the ones that are there are drying up and dropping off the tree. We had this happen to another maple a few years ago. I don't know what's wrong, but it always makes me sad to lose a tree. The only thing I have noticed are a lot of chipmunk holes in the ground. Surely chipmunks cannot be responsible for killing a tree?!? 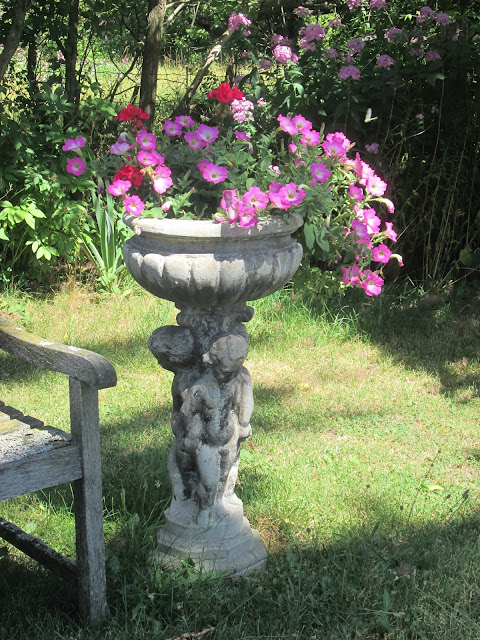 On a happier note, my pretty cherub planter is doing well beside the lichen covered bench. It is very close to the little arbour that is covered now with trumpet vine. 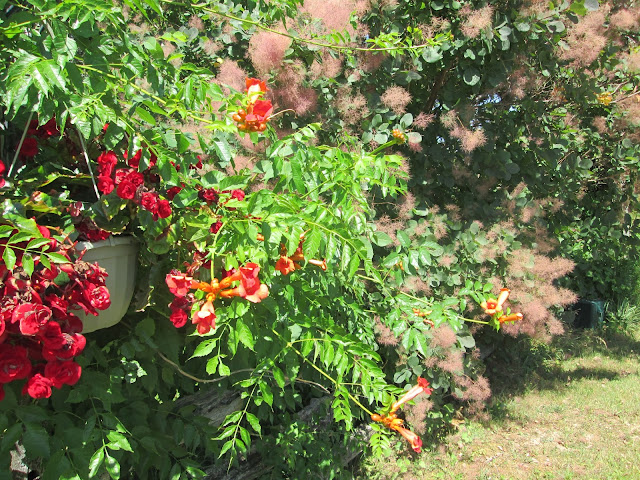 These are orange trumpet vine flowers (along with red begonia in the hanging pot and the last of the fluffy smoke bush). It took YEARS for this trumpet vine to actually bloom. My neighbour planted one and it is blooming profusely! Hers is more out in the open, so maybe sunlight is an issue.

We went into town to get a power adaptor/converter for when we go to England in August and changed some money over into pounds. Tonight my son's soccer team plays in a town about 40 minutes away, so we will have an early supper and head over there. Soccer goes from May until August. Those first few evening games in May are often a bit chilly and parents will wrap themselves in blankets, sitting on their lawn chairs to watch. Now when we watch home games, we are all wearing sunglasses, blinded by looking to the west as the sun beats down on the players, making sure everyone gets their water breaks. It's very enjoyable watching these games as they are age 16 and under players. There is a lot of skill and action to the games now. When our kids first started playing soccer at about four or five years of age, the players would run as a pack, or a swarm. My daughter picked clover and held hands with other little girl players as they ran down the field. It's a whole different game now, as many of the players are old enough to shave!!

I hope everyone is having a great July, and for us Canadians, don't complain about the heat. It will be winter soon enough!
Posted by coffeeontheporchwithme at 7/26/2016 03:10:00 pm