Yesterday I dragged out my breadmaker. Why? Because I am trying NOT to eat carbs in the form of breads, cakes, cookies, buns... so naturally I thought I should bake some bread (glutton for punishment).  So that's why I picked up some fresh yeast when I went grocery shopping and also a small bag of powdered milk. The ONLY reason I would buy powdered milk is for breadmaker recipes. Otherwise, it smells gaggy to me and brings back a bad Home Ec. memory from elementary school.

I found a recipe online that was for whole wheat bread and included honey and molasses. It was to make a two pound loaf. So, I put everything in, in the order it called for, pushed a button and waited about five hours. I was pleasantly surprised that my breadmaker (which hasn't been used in over a year, maybe more) worked like a charm, if you ignore the squeaky sound it made.

I should have taken a picture of the breadmaker before I took the loaf out. I know it shouldn't have been so big as to press ominously against the little viewing window. But I couldn't really do anything about the ballooning bread, short of stopping it and abandoning the whole venture. So I let it go until it beeped three times at me.

I only had to wrestle it out a little, then tipped it out onto a cooling rack. Then I took a picture. 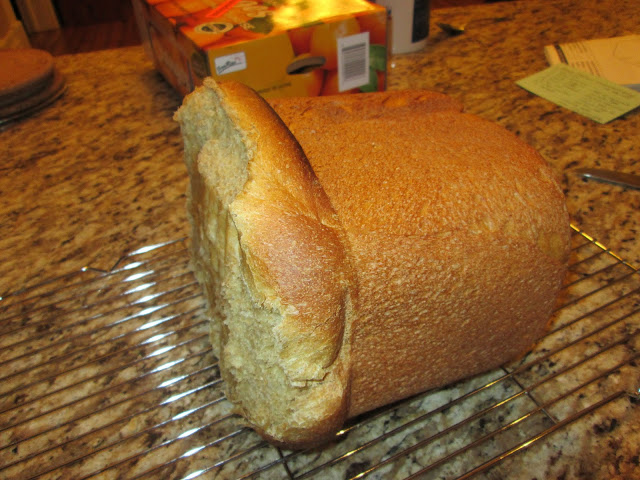 You can see where it oozed out over the top of the inner baking container and stuck to the inside of the lid of the bread maker. 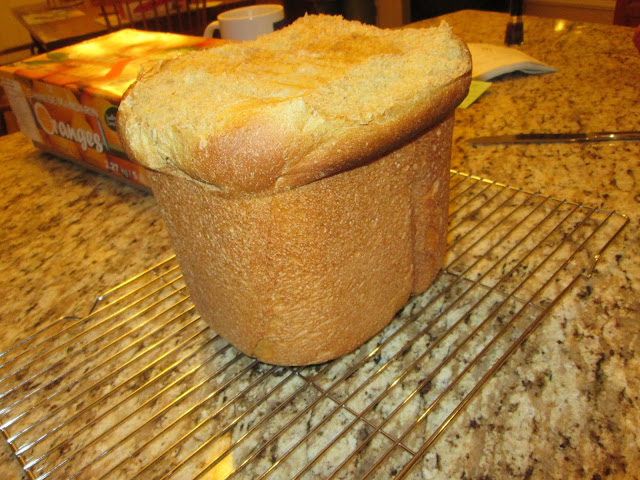 But even though it looks odd, it turned out to be a very nice loaf of whole wheat bread. I only had one slice, but husband and son have both eaten a couple of slices. I probably won't make another loaf for a while and if I use the same recipe I will have to cut it back a bit.

Meanwhile, our home is often in some sort of state of renovation. Most recently was our kitchen which is now 90% done. The project that my husband is currently working on is the upstairs bathroom. In our old house (more than a century old, but not totally sure exactly how old it is), there was never a bathroom when it was built. When we purchased it 16 years ago, the bathroom was very big and was in a room that was likely a parlour type of room, maybe a dining room. Either way, it was turned into a bathroom at some point. Upstairs in our house there were four bedrooms. Three bedrooms were of a respectable size, and one was a bit smaller. That room was our son's room for a little while but he has since moved into a different room. Then that room was the inevitable "storage room", but let's be honest, it was the junk room, a place to store things that didn't really have a home.

Now that room is being turned into an upstairs bathroom - a real luxury when it is done. I will not miss having to go all the way downstairs (18 of them!) in the middle of the night to use the bathroom. My husband is doing all of the work (in addition to doing his full time job). He was at it this weekend. Here is a sneak peak at the work being done. 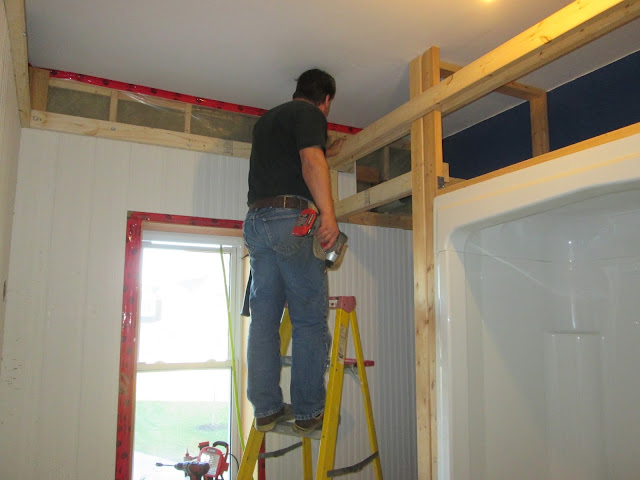 The tub and surround is already in place. Where the ladder is will be the spot where the toilet will be tucked in. The ceiling will be dropped from the original high ceiling in order to accomodate lighting and wiring and such. 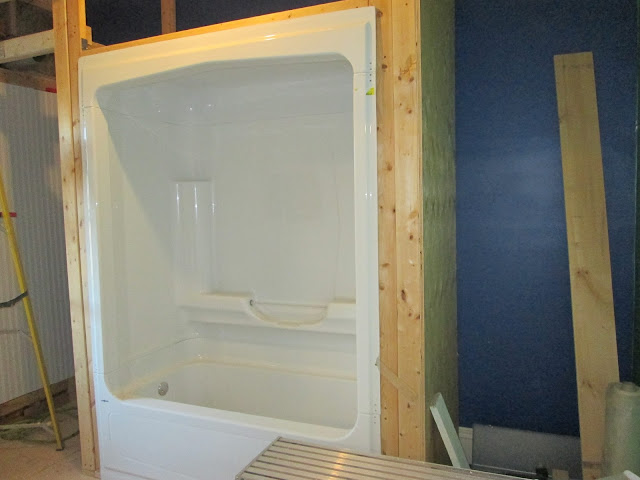 The blue wall that you see beside the tub enclosure is leftover from when this was our son's room. That alcove sort of space will be a built in cupboard for towels, supplies, etc. 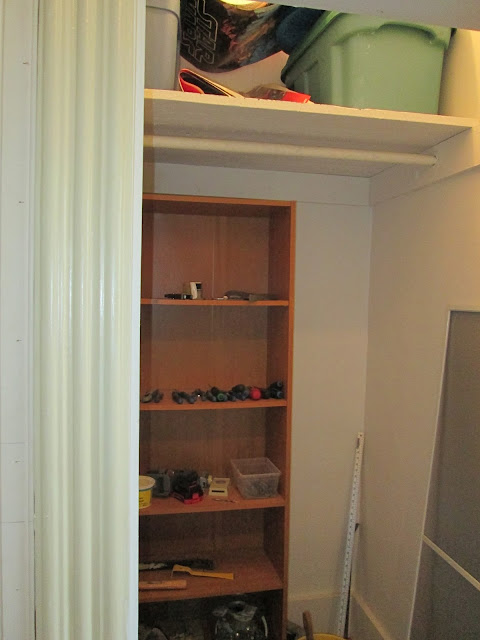 This shot is looking into the closet in which my husband has placed a cheap shelving unit to put his tools while he is working on this project. When everything is finished, this closet will be a linen closet, something I have been waiting 25 years for. In every one of our houses, we have not had a designated linen closet. I have stored sheets and blankets in all sorts of ways like in drawers of dressers placed in spare bedrooms, in large rubber maid containers in "junk rooms", and in a bathroom closet which wasn't really big enough to be a linen as well as a bathroom storage closet. So, although it will be wonderful having an upstairs bathroom, I think I might just be a wee bit more excited to have a proper linen closet!! There is no completion date goal because this reno is happening when my husband has time and energy.

I often wonder what it would be like to have a totally finished home. Have you ever lived through multiple renovations? Do you hire people, or do it yourselves?
Posted by coffeeontheporchwithme at 12/06/2015 09:36:00 pm