Spring has finally sprung here in my part of Ontario. The birds are singing, the trees are blossoming, the blackflies are biting. We had a very busy day yesterday. Husband rented the "Beast 2000" and we spent the better part of yesterday chipping the previously cut down Manitoba maple regrowth saplings and some small walnuts and a dying tree from the neighbour's yard. The neighbour lives in a city a few hours away, but agreed to chip in (ha ha, "get it" as my daughter used to say when she was little and tried telling jokes) on the price of the machine if we could take care of those trees for him (we keep the firewood). 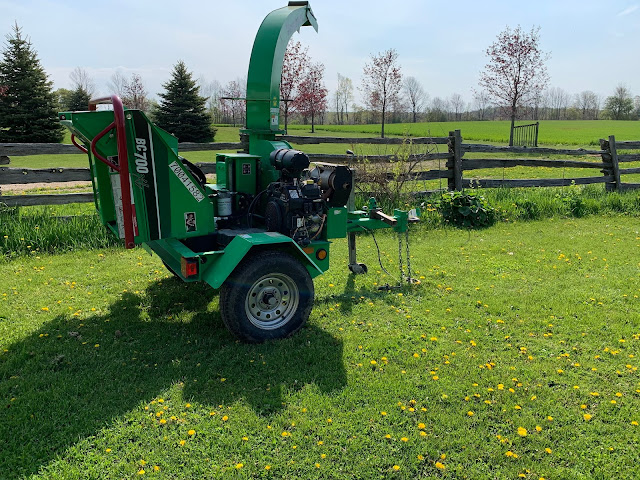 This chipper is not a large as the one we rented a couple of years ago, but it did the job. I used the wood chips in a couple of beds, as the original chips were pretty much gone (where do they go?) It's not the best looking mulch, as there are also twigs mixed in, but it does the job. 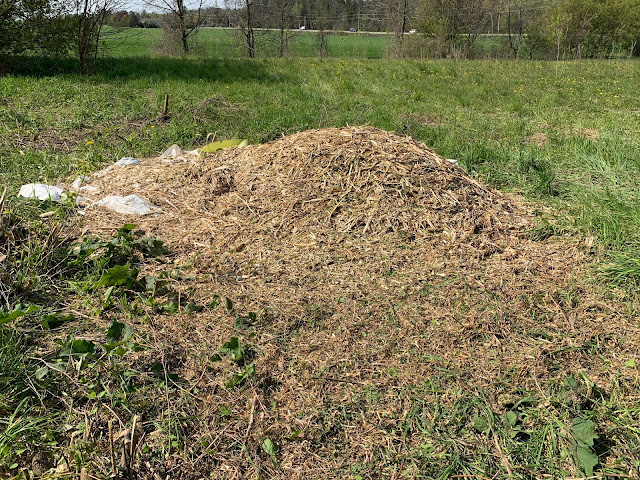 Underneath that pile of wood chips is a tarp. This is at the edge of the "field" that is right next to our property. Nothing is planted in it, it's just "scrub" land. It might not look like a big pile, but it really is. I have lots to use. 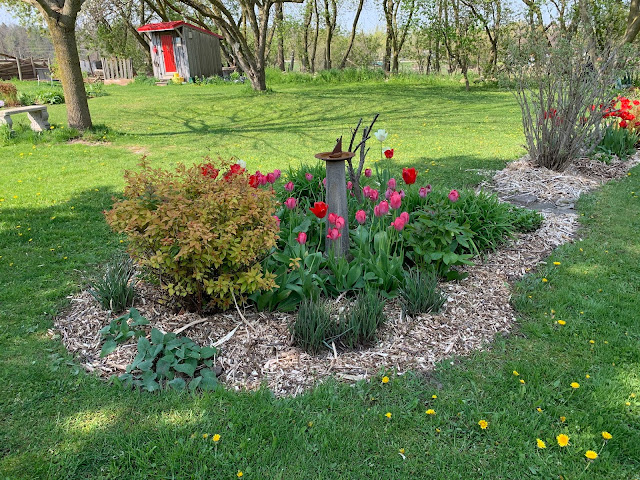 Here are the results of mulching one flower bed so far. From a distance it looks pretty good. My next bed is a BIG project. It is the shrub border that runs along the pool fence. It needs lots of weeding and there are hydrangeas popping up where they shouldn't be. I had originally used landscape fabric around the shrubs, but plenty of weeds have poked right through, and again, the original woodchips are pretty much gone. It's so hard weeding up against the concrete edge, under the fence. I'm hoping I can just choke everything to death with a thick enough covering of mulch. 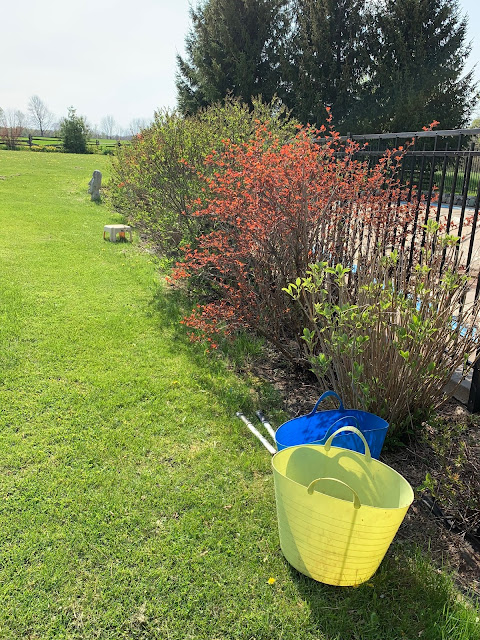 Last fall, I did some serious cutting back of the dappled willow behind Gerald. I should have listened when someone said it would get big. 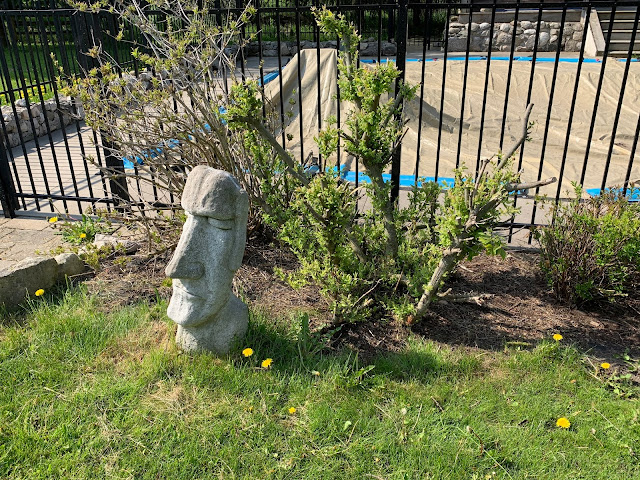 There is plenty of new growth, so I'm not worried about it. You can see the winter pool cover and tarp still on the pool. It will be a long while before the pool is opened up and ready to swim in! 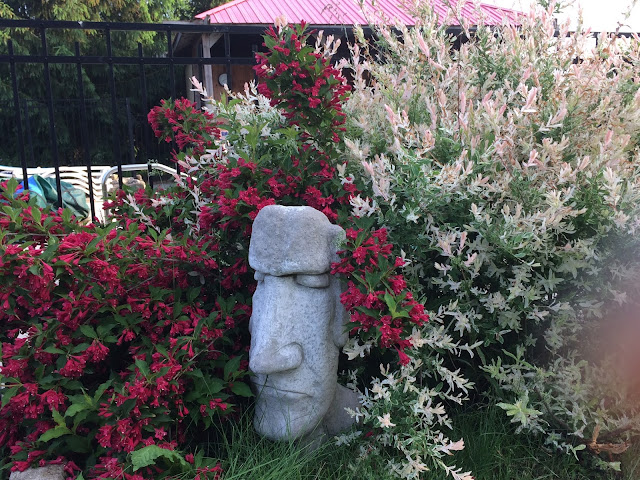 This is a picture of Gerald from a couple of years back, so you can see the willow in its normal state. That is a wigilia beside it. The willow got to be about twice that size and was crowding out other shrubs, as well as poor Gerald!

Our old apple tree is blooming right now, and right on cue, I spotted an oriole in it this morning. There is no oriole in this picture. Try as I might, I've never been able to get a good picture (I don't have a fancy camera with special lenses - just my phone!) 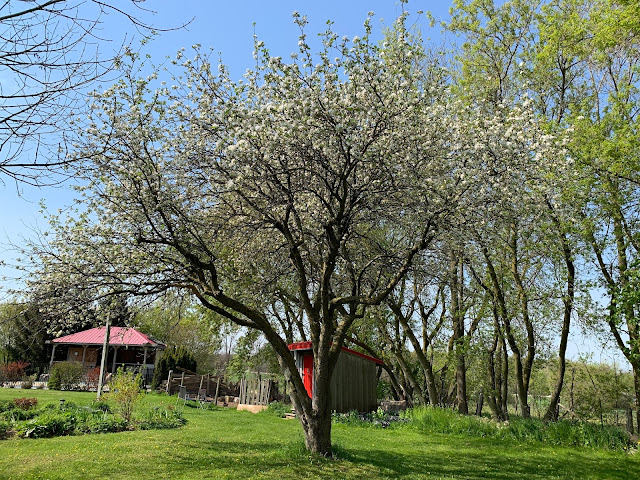 Here is a closer look. It literally makes a humming sound, with all the bees enjoying the blossoms. 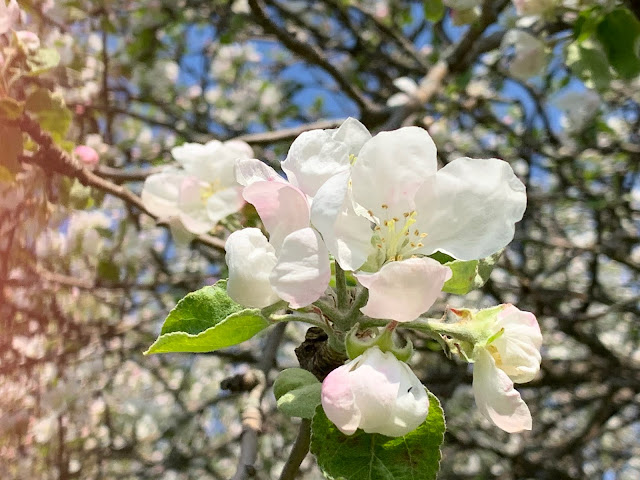 On the kitten home front, things are going well. She has two states of being: perpetual motion, or sleep. 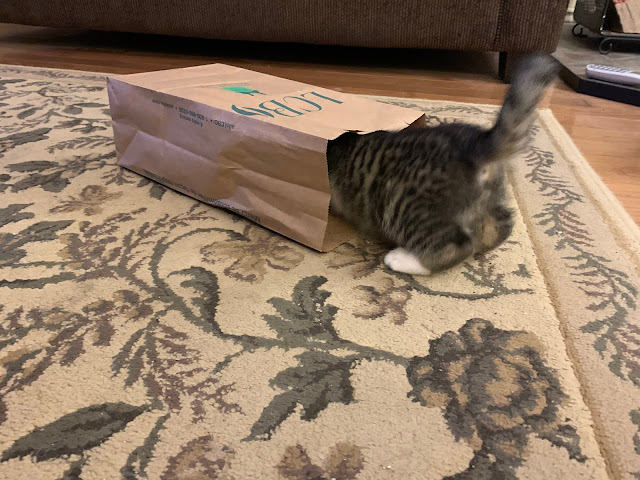 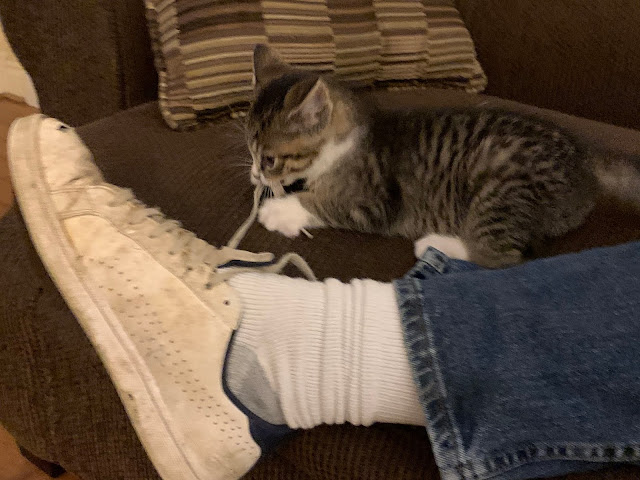 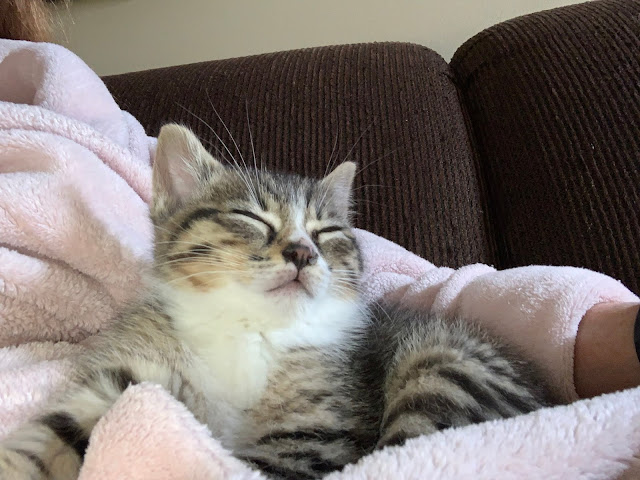 We have taken our time introducing Molly to our other cat, Scooter. There has been the odd hiss, and I'm not letting her get too close to him (she's the one who would likely exhibit poor behaviour), and I'm feeling a bit bad for Scooter in that he just comes in to eat and then leaves again, but I think in time, they'll come to an understanding. He is pretty passive and I don't think he'd hurt her, but I don't want him to think he has to keep running away.

Tomorrow morning, son is moving back to the city where he attends college for his summer term. I imagine most of his classes will still be online, but he does have a lab for which he will have to be onsite. It's been so nice having both of our "kids" living with us, but time moves on. Hopefully our lockdown (which has been extended) will end in early June and he'll have a bit more freedom, as will we.

The chickens, and I, are very happy for the nice weather. I have much weeding to do. Have a great rest of your weekend, everyone. 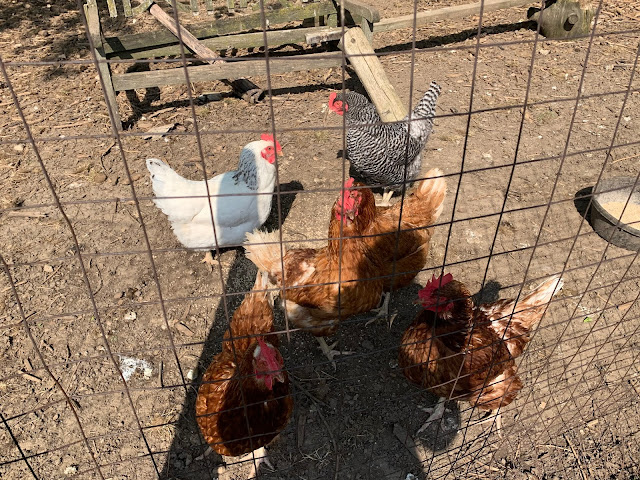