Fruits of my Labour

Today was a busy day - it was time to do some preserving and freezing. I didn't want my garden produce to go to waste, even though I would rather not be attached to my kitchen all day, but that is what the day involved.

I was up by about 6:30 because that's what my body is used to now, and husband was also snoring up a storm after having cut the lawn yesterday. After a big mug of coffee and opening up the chickens, I went out and picked the remaining beans, both green and purple. I already had some in the crisper that I had picked a couple of days ago, so I did the whole washing, trimming, blanching routine and ended up with two medium sized freezer bags of beans. You'd think it would have resulted in a greater amount, but it will still be good to be able to reach into the freezer in January and pull out one of those bags. 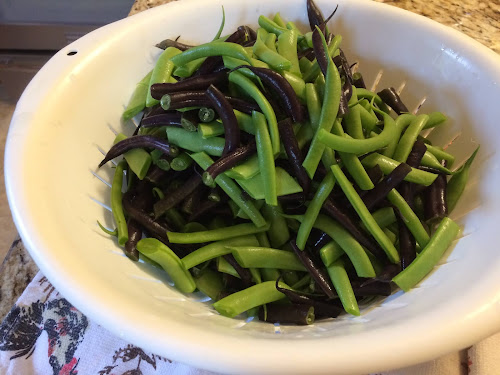 I think the green and purple look nice together. After they are blanched, they are all green. 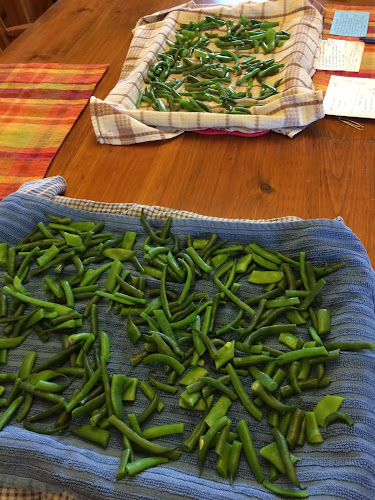 I spread my beans out on towel after blanching to dry before they get bagged and frozen.

Next on the list was pickled beets. This is the first time in a VERY long time that I've been able to successfully grow beets. I think it was a combination of adding lots of my own compost to the soil and laying out soaker hoses and using them frequently throughout the summer. 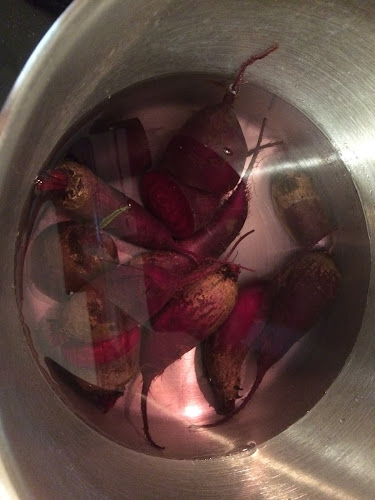 I grew cylindrical beets. They ended up growing up, out of the soil. I didn't make a lot of pickled beets because I think only husband really likes them. Maybe daughter's boyfriend as well. I prefer beets boiled with some butter, salt and pepper. 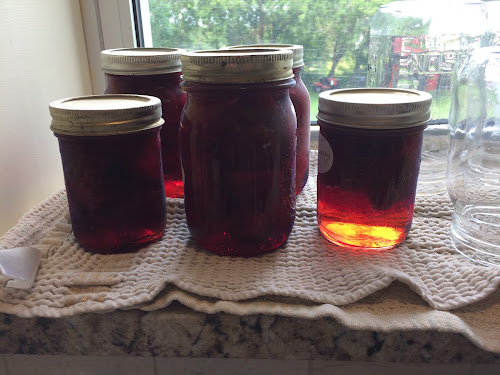 Three pints and two half pints of pickled beets. Those stickers from previous years (when the jars had strawberry jam in them) do NOT come off easily. I washed those jars in the dishwasher and processed them in boiling water, and the stickers still held. I ended up just writing on the jar lids instead.

You may recall that one of the successes in my garden was a little hot pepper plant that son brought home. You may also recall that they were deadly hot. Well, son was feeling a little bad that they would potentially go to waste and was hoping I could do something with them. He and his sister enjoy Frank's red hot sauce and sriracha sauce in different kinds of food, so I thought, why not try to make a hot sauce? I looked up some recipes and realized it's not difficult and I had the necessary ingredients. 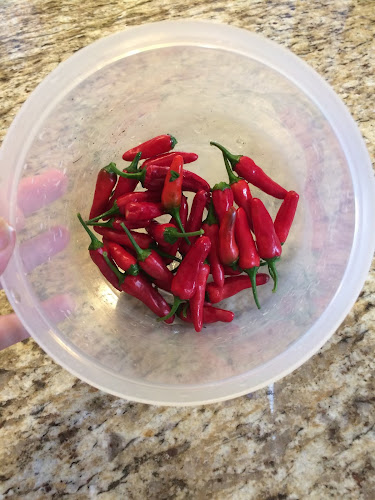 Those are the little devils I used today. There are still just as many out on the plant! I grabbed some plastic gloves from husband's shop and got to work trimming them and scraping out the seeds. I've heard that a lot of the heat is in the seeds. I'm pretty sure there's still heat in the rest of the pepper, as I managed to clean out my sinuses by breathing too deeply while they were boiling in their vinegar bath. I might have been able to strip the finish off the kitchen cupboards if I let it boil long enough. Anyway, after whizzing it up in the blender, I poured it into two small jars and sealed them. I don't want to be the one to try it.

Next on the list was making my mother's chili sauce. This is not a hot chili sauce. It is tomato based and perfect with sausages. I got the recipe from my mom many, many years ago. It just makes a small batch, but it's important to slowly boil quite a bit of the liquid away so you end up with a thicker sauce that has a nice dark reddish brown colour. I think it turned out perfectly and it used tomatoes from my garden. 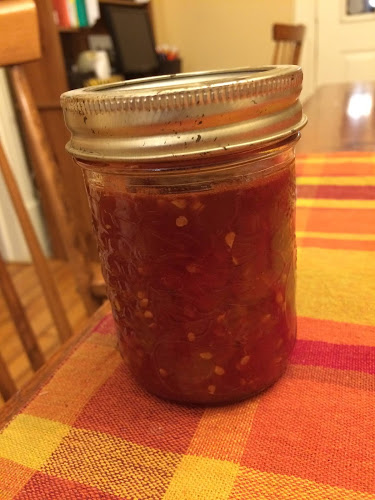 I re-use my old jar rings. They really show their age! 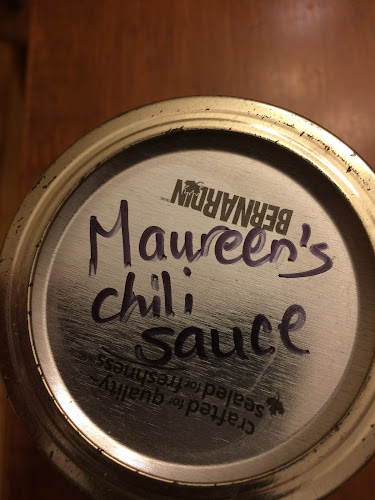 I couldn't even find labels for my canning jars this year, so I just wrote on the lids with a Sharpie marker.

After supper, there was still one more thing I wanted to make: orchard fruit chili sauce. I've made this a few times, but haven't made it in about three years. Again, my tomatoes were part of it, but it includes so many great flavours that just marry together into a very pretty sauce: tomatoes, onions, peaches, plums, pears, red bell pepper, green pepper, celery. 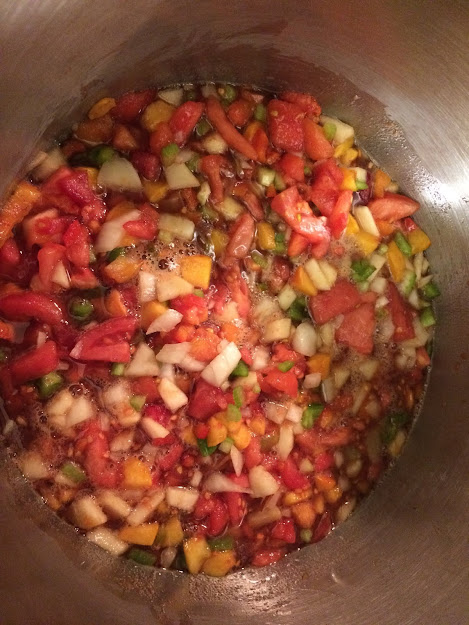 I love all the colours it starts out with. 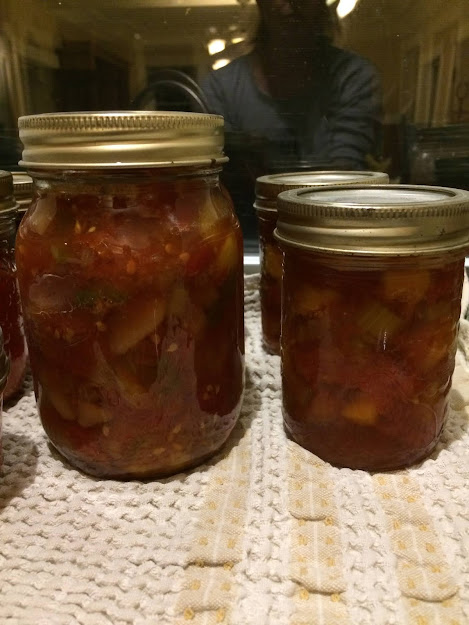 There are some of the orchard fruit chili sauce jars cooling off on the kitchen window sill. (Note to self: don't take pictures in front of windows in the evening!Can you see my reflection?)

I love the look of jars lining a shelf. It makes you feel like you are ready for any disaster - snow storm, power outage, pandemic (oh hey... ) I still have more tomatoes coming. I'm keeping my fingers crossed that we don't have a frost any time soon. Even if I can just can some tomatoes, that would be great, but I do want to try to make Maggie's tomato relish. (The Farmer's Wife Day by Day)

What kind of preserving did you do this year?