Do you now have Carly Simon in your head?

What am I anticipating, you ask? Oh yes, the tomatoes are coming! With the ridiculous rains we had over the past couple of days, these beauties have toppled over despite having cages and stakes and various methods of tying them up and supporting them.

I decided to do some pruning, cutting back unnecessary foliage and even taking off some sections with yellow blossoms that won't amount to anything before frost arrives. I am hoping this will help keep things from falling over even more by reducing some weight. As well, the plant can put its energy into ripening versus producing more fruits. Also with this rain I'm starting to see some yellowing and brown leaves, so extra air circulation is probably needed.

I cut back about three big tubs full of foliage and now I can see even more lovely tomatoes. 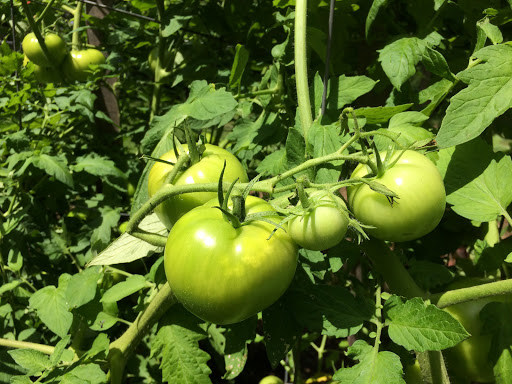 Tomatoes with basil and olive oil and those round squishy balls of mozzarella cheese...

O.K., enough of that. I also have three lovely pumpkins (and one smaller pumpkin) that are starting to turn colour. The one in the picture is about the size of a basketball. 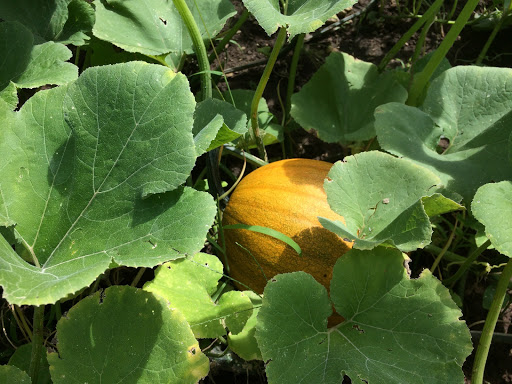 Don't be all that impressed however. I planted three pumpkin plants! And all I have are four lousy pumpkins. It is due to this lovely little creature: 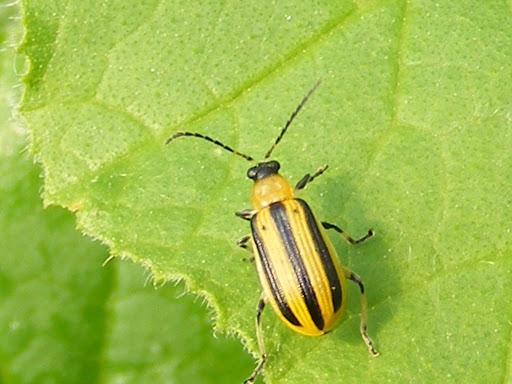 I started out the summer season by hand-squishing as many of these as I could get (they move pretty quickly!) on my zucchini and pumpkin plants. They congregate inside the yellow blossoms, however I also damaged a lot of yellow blossoms by trying to squish them.  As time went on, their numbers increased so much that it was beyond me.

I have tried something like insecticidal soap sprayed on them and they laugh at it as they gleefully fly away to land on another member of the squash / curcubit family. They would have killed off my cucumbers as well (if they have survived... sigh). These striped cucumber beetles decimate the blossoms and carry some kind of fungal disease to the leaves and vines as well. They are the reason I harvested two, TWO zucchinis this year. Most people would be knee deep in zucchini by now, giving them away to anyone who would have them. I have had two. They are also the reason for four pumpkins from three pumpkin plants instead of what should have been at least twice that much.

When those pumpkins fully ripen and turn a gorgeous orange colour, I shall give them a place of honour on my porch and makes things look very autumnal.

Remember I said in my last post that something was eating my plants again? (Don't remember, that's o.k., I often don't remember what day it is). Here is some evidence. 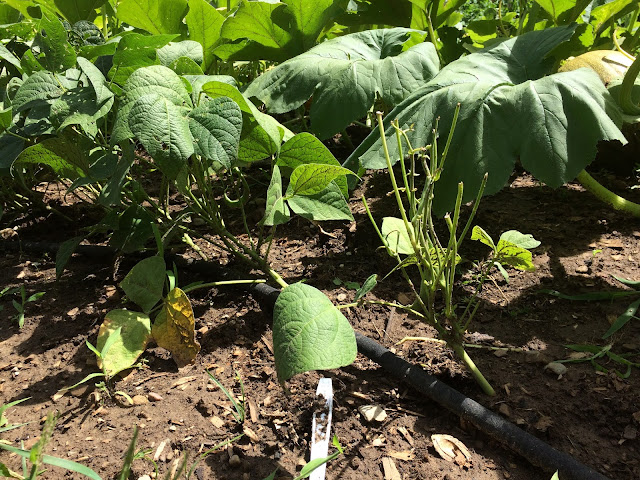 What you are looking at used to be a green bean plant. Now it is a small collection of leaves and some stems.

On a different note, I do have something that is doing very well. I had a plant that was growing in my compost container. I didn't know what it was but suspected some type of squash, likely zucchini. I just let it keep growing. 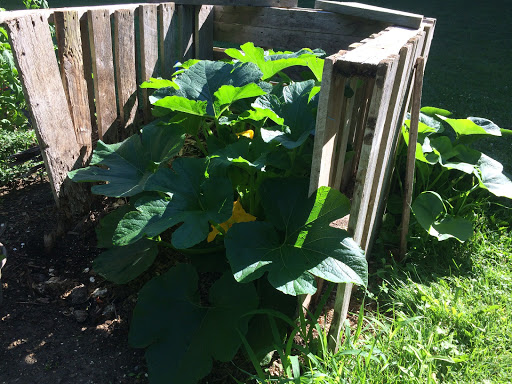 There it was, growing robustly out of my compost, big yellow blossoms braving those nasty little beetles. It looked very healthy (compost will do that) and I left it and wondered what it would grow up to become. (By the way, I've noticed that "robust" is now the new buzzword. I've heard politicians and administrators use it. Listen for it. Turn it into a drinking game!)

Here's what it is: 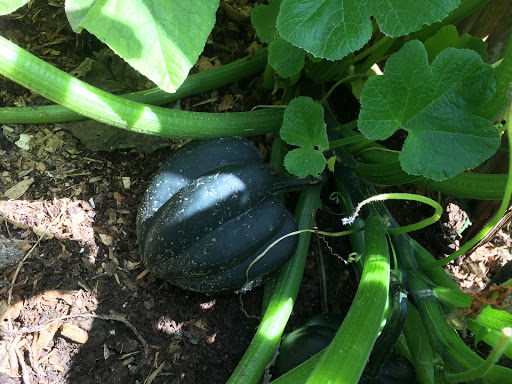 I will leave you with one last image. With bindweed and cucumber beetles and huge rains and seering heat and hungry rabbits, there is one plant in my garden that chuckles "heh, heh" in a deep menacing tone, "bring it on!". 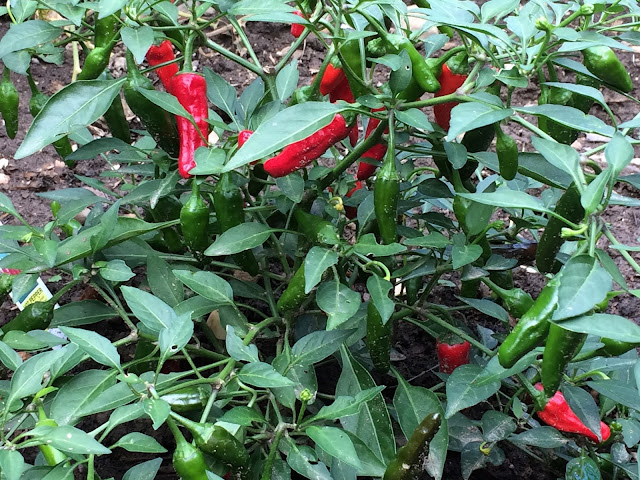 If you recall (and you probably won't) at the beginning of planting season, my son was working at the garden centre of a grocery store and wanted me to plant a pepper plant that he brought home because he likes hot sauce and such. It is flourishing and gorgeous. Nothing bothers it.

There's a reason nothing bothers it!! It is a "super chili" according to the tag. The first one that he picked and was quite excited about was brought in the house whereby we each tried a little bite of it. HOLY MOTHER OF ALL THINGS HOT. According to the Scoville Heat Range (yes, that's a thing), it's 40,000 to 50,000 SHU. That places it 5 to 20 times hotter than a jalapeno pepper, which many people would be able to relate to. By the way, SHU stands for Scoville heat units. I'm guessing Scoville is the brave person who created this scale by trying out all the peppers in the world??

Anyway, what the heck do we do with these things? I don't even think I would include them in a salsa recipe. I like to be able to use my mouth for a day after eating salsa! If there is anyone out there who knows how to use them in a recipe but decrease their heat, let me know. Otherwise, these are to remain ornamental.

I hope your gardening is successful. May your tomatoes ripen and your rabbits run away!