Easter has always been my favourite holiday. Even more so than Christmas. Easter held special memories going back to my childhood. I love the time of year in which we celebrate Easter. I love the colours, the flavours, the "feel".

Easter meant baskets, real ones, made out of wood or reeds, with a nest of cedar cuttings in which were nestled beautiful coloured eggs and a few special treats as well. Easter came with a toy, too. Sometimes it was a new Golden Book (remember those?) or a skipping rope that had a special smell to it (and I often wondered if it tasted like the shoestring licorice that it reminded me of), or a ball. These were all memories from my own home. The smell of cedar still takes me back to that.

We also had an Easter tradition that my mother carried on from her mother, and that my sister did a good job of continuing while my mom was still alive with her children and the cousins. My mother came from German heritage where the bunny brought special warm golden brown eggs. This required a special kind of "call" which my grandmother did, and then my mother after our grandmother died. We children would be inside the farm house, the "call" was made, and then when we went outside, we found tucked under bushes, or on the lawn, or in the rock garden, or on the stone porch wonderful warm-to-the-touch golden eggs. We firmly believed that they had been brought (or maybe even laid!) by the bunny. There were even little scratchy marks on the eggs which we were told were left by the bunny's claws. In my mind, this bunny was of the cottontail nature (not some grotesque costumed white being with a freakishly big head and a vest).

The eggs actually were made by boiling white eggs with many onion skins. (They would be saved up a few days ahead of Easter, and ripped off of whatever onions were in the house at the time). They were warm because the adult women would be boiling them up while kids were playing, paying no attention whatsoever with what was happening in the kitchen. Year after year and we never caught on.

With our own children, we created our new traditions, although when they were little and my parents were still alive, they hunted for the same special bunny eggs at "grandma and grandpa's", and at my sister's a couple of times, too. I did continue the cedar boughs in the baskets and spent many, many nights before Easter staying up and dying eggs after the children went to bed, hoping nobody would get up and need to use the bathroom and catch me in the act. I also spent many frosty mornings (literally!) at about 6:30 a.m. hiding plastic eggs filled with treats around the yard. When our kids were very little, the eggs would just be hidden on the porch, but as they got older, eggs became harder and harder to find. Once, when an egg was placed in the rotten crevice of an cut-off pear tree, it became stuck. My husband used the saws-all to extract it! My daughter is far more competitive than my son (in this kind of activity) and took it upon herself to find more eggs than him. One year it was colour coded and they were only allowed to pick up eggs of their own designated colour, leaving any others for their sibling to find. In the end, they always divied up their treats evenly between the two of them anyway.

This is the first year that I have not hidden eggs. The kids are currently 19 and 16. They need to be woken up. They don't wake up on their own with the anticipation of what the Easter bunny brought for them. They did get treats, however. You can never be too old!


Weather wise, it is a beautiful Easter Sunday out there. I got out a bit, loading up the wheelbarrow with branches that came down over the winter. Almost all of the snow is gone. There are even a few little spring flowers up. 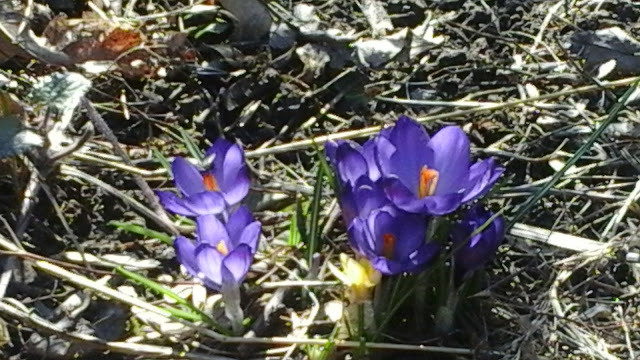 We have my husband's mom here with us this weekend and both kids are here. I have a big ham in the oven and I'll make mashed potatoes, carrots, coleslaw, green beans, asparagus (and brussel sprouts just for me, nobody else likes them). I tried a new recipe that I grabbed from Pinterest for dessert. With a salty ham, I thought that lemon would be a nice balance in taste. So I made lemonade cake. It caused a bit of an oven disaster when I was baking the two layers. They bubbled over so much they oozed out over the floor of the oven and on the rack below. Nice burny smell until the oven cooled enough that I could clean it up. The icing is a lemon cream cheese (mmmm!!)

I hope everyone has a lovely rest of their weekend. Happy Easter! 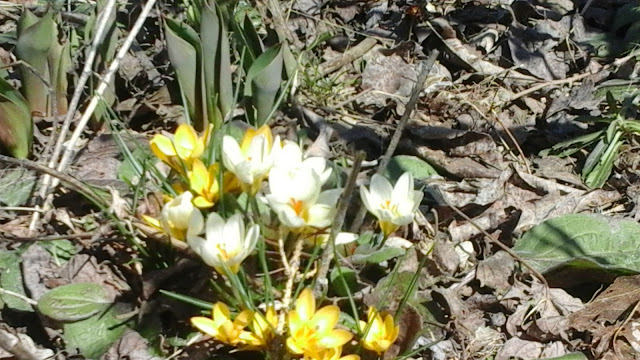