Here is a picture of my latest library haul. 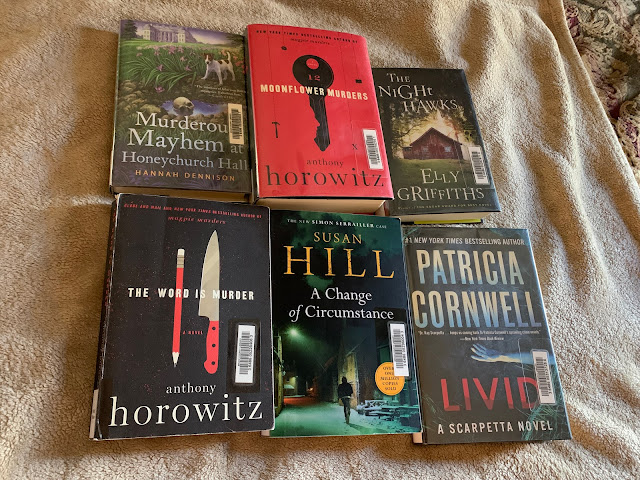 I have other books on a waiting list that I specifically want, but so do a lot of other people. I am not 100% sure that I haven't already read the Elly Griffiths one, but since I can't remember, I likely should re-read it anyway.

I want a bunch of books because, seven months later, I am finally going to be having my radiation therapy for my breast cancer. Yes, you read that correctly. Seven months later. I was diagnosed in July of 2022. In two weeks I will be going daily to a hospital in a city two and a half hours from my home to receive five doses of radiation altogether.

Here is what I am thankful for. My cancer is early enough  and a of a type that doesn't require more than five doses. Research has shown that five doses actually equals the old standard of three and a half weeks (you get dosed Monday to Friday with weekends and holidays off). So that is a definite plus.

I won't be driving (or asking husband to drive) this on a daily basis. That would be insanity. Instead, the hospital and the cancer programme has a deal with a hotel in the city where you can stay for a small fee during your treatment time and they also provide a shuttle service back and forth to the hospital. This is incredibly civilized and kind. It is also cheaper than having to build more facilities and outfit them to provide radiation therapy in smaller centres. Hence the reason for the books.

Here is what has caused me mental anguish (I am being serious here) for the last seven months. Initially it was hearing that I had a cancer that I never imagined I would ever have. But after absorbing that information, the worst part, even beyond the tests and procedures and needles and biopsies and surgery and all the other physical stuff was the waiting. Every test required a waiting time. Every test result required an unbelievable amount of waiting time. If "they" said it would take two weeks, it would take four, or five, or six. And each one of these waiting times was filled with doubt, fear, anxiety, and then self loathing that I couldn't just pull it together and put my big girl panties on and reassure myself that it was all going to be o.k.

The final test which was ordered by an oncologist in a town close to where I live kind of did me in, psychologically. He suggested that chemotherapy might be needed, even though the surgeon never once suggested it would be needed. The test results were not done in two weeks, as stated. In fact, it was discovered that the samples hadn't even been sent away, and they had to go to California for testing. So, the entire month of December (Merry Christmas) was spent waiting, wondering, doubting... and of course, as many of you know, agonizing over my sister's health scare (she is doing very well and making incredible progress considering her previous state).

I finally found out the results this past week. No, I do not require chemotherapy. I know I am lucky. I know many, many, many people out there are not that lucky and do have to go through chemo. But to dangle the chemo possibility in front of me after seven months was kind of the last straw. But now I know for sure.

And here's what I also know for sure. Yes, we have "free" health care in Canada  (it isn't, of course, but I didn't have to pay for any of this out of pocket. Instead I paid with my taxes for my entire working life), but the lack of doctors, nurses, techs, proper facilities all contribute to the extensive wait times and lack of care. Heaven help a person who can't advocate for themselves, a person who is old and unable to make the phone calls (you can NEVER talk to anyone directly) and navigate the technology, a person who doesn't just have a basic support system at home to help them manage the fear and the anxiety. You may recall that when all of this happened, I didn't even have a family doctor (primary care physician), mine having retired and not replaced. I had to do the work to get a new one and the only reason that happened was because of my cancer diagnosis.

So, this ended up being a bit of a rant, I realize. To end on a slightly more upbeat note, I will share with you that I am now officially "cool". I am sporting three tattoos! Nope, I didn't go out and get some meaningful life journey tattoo at the local tattoo parlour (of which there are many). In order to line me up perfectly and zap me with radiation, I got measured and triangulated and received three tiny dots of black on my body. This is so that each time I get my radiation, I can be lined up perfectly, thereby guaranteeing the best possible treatment. Yup, that's me, super cool!

It's a brighter day today, cold, but bright. I saw a snowy owl on Thursday, which gave me no end of joy. I do hope everyone has a nice weekend, whatever that entails for you. My one goal today is to put away all the Christmas mugs / cups and replace them with our usual, every day ones. This is the last vestige of Christmas in the house and it is driving me nuts seeing them. When Christmas is over, it's over for me. Feel free to chime in about any of the above books, by the way.