How Many More Sleeps?

I am writing this at 6:57 a.m. and I can hear Bruce crowing like a crazy beast in the chicken coop. No, I am not going out to open up the coop. Why is one crow not enough?? When are the "neighbours" going to start complaining and come over with an axe? But I digress. I have decided to just stop dancing around what I do for a living, so that you may have a clearer picture of my world right now. Husband and I are both elementary school teachers. I've been in this game for twenty-eight years now. Yesterday was the last school day before Christmas holidays. I am tired to my bones. The enthusiasm and craziness of the lead up to holidays is more of a young person's forte. At fifty-two years old, I crash at the end of the day, especially after a week of Sprit Day (every day  e.g. Ugly Christmas sweater day, Christmas hat day, Christmas pajama day...), the Festive Lunch for the entire school, carol singing in the gym every day, Festive skate at the community centre, and desperately wishing our salt dough ornaments were dry enough to paint. Do I still love it? Yes, but it's more tiring now. Add a spouse who's doing the same things (different school), and that equals two people who sit on the couch at the end of the day.

Anyway, when I came home yesterday, toting wonderful, thoughtful gifts from students and spreading them out on the kitchen table (and husband adding his own collection - we are never without Tim Horton's cards!), I declared that I would not be making food for anybody and phoned a restaurant in a nearby small town (everything around here is a nearby small town). It's nothing fancy, but the food is always good and there are always leftovers to bring home, which makes son happy. (He, by the way, was working his part time job, then happy to be seeing his girlfriend who is now home from university, and then going to coach his basketball team). We set up a reservation, and then I had a much deserved glass of red wine.

When we got there, we saw that the little shop two doors down had a new window display. I had featured this display in a previous post. There are always moving features and lights. I have no idea who builds these displays, but this one was very well done with details and quotes from 'A Christmas Carol'. 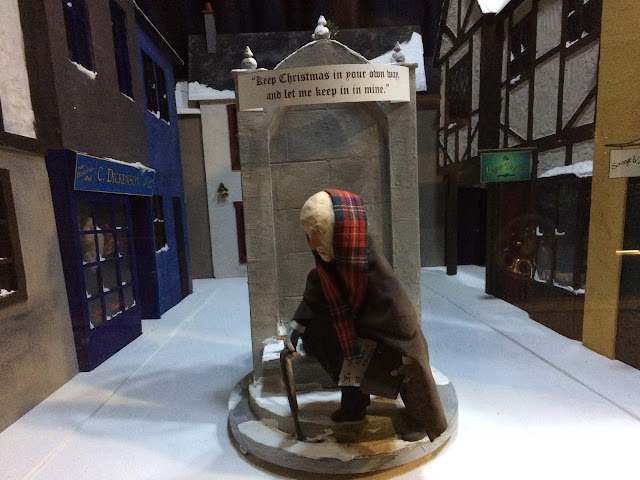 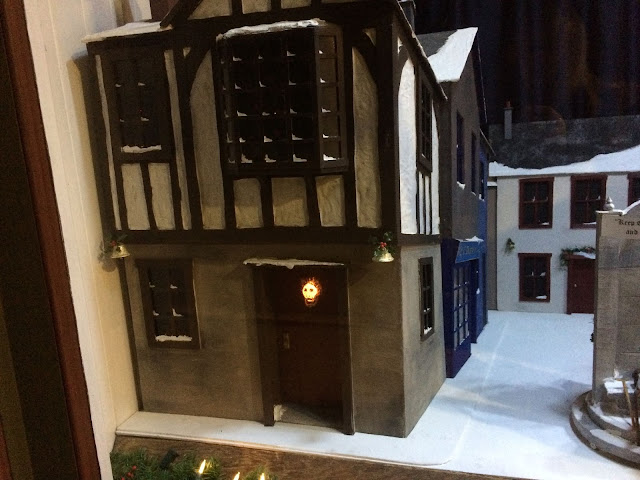 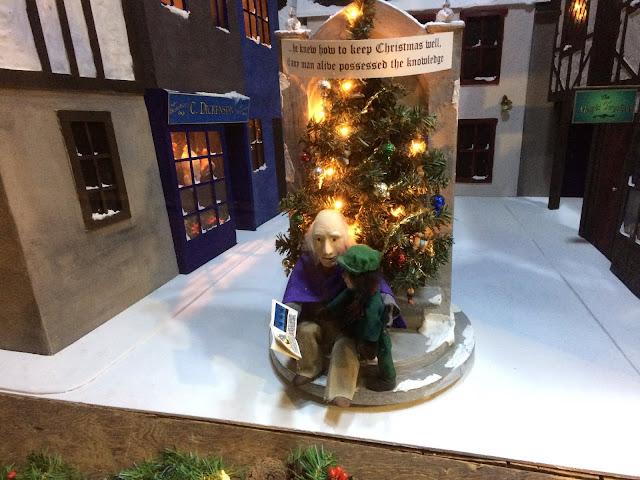 This centre piece rotates around with the before and after Scrooges, the after one featuring lights, and other parts of the display also light up at the same time. 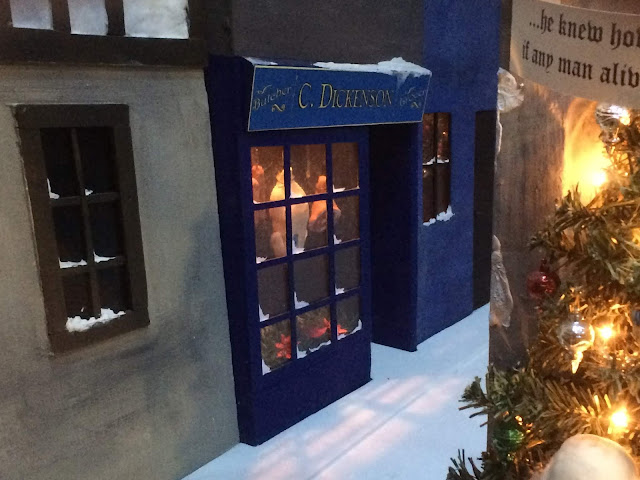 Do you see the big goose hanging in the butcher shop window? 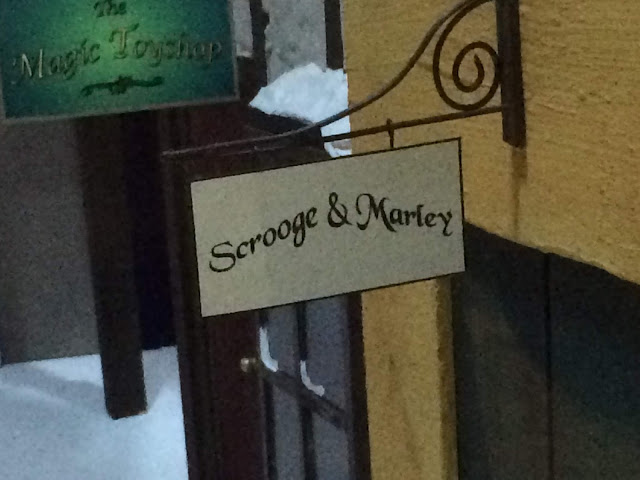 Well done, to whoever the craftsperson is who creates these wonderful windows.

As we quickly approach Christmas (my big gathering on the Boxing Day, a smaller gathering here as well on Christmas Day), the weather changes constantly. We had a ton of snow just a couple of weeks ago, then it became ridiculously mild and it rained and we lost most of it, and now the temperature is dropping and it's calling for more snow. Although I am not a fan of winter, I would actually like some snow on the ground for the holiday. The pretty outdoor lights would look better, and it would just feel more Christmasy. A couple of nights ago, the sunset was just incredible. This picture does not really capture the colour well, but imagine the sky on fire. 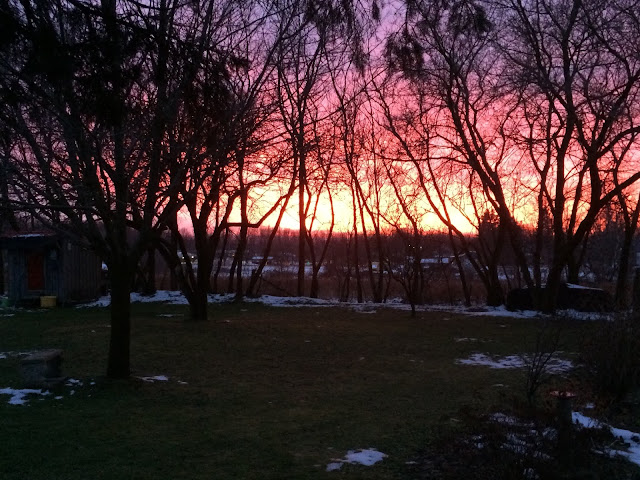 Another sight from a few nights ago... 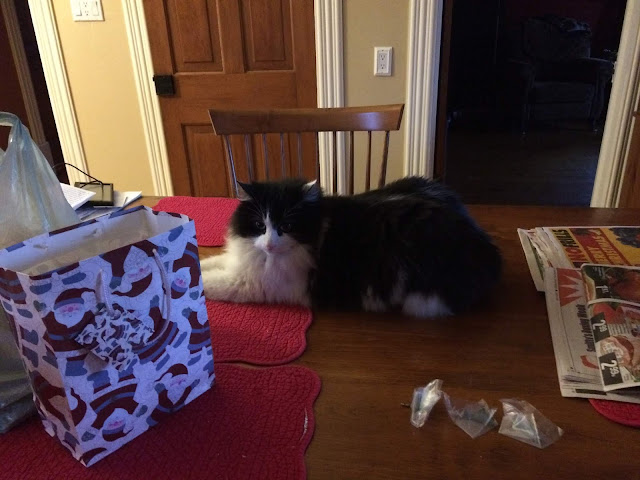 Scooter, just casually lounging on our kitchen table (excuse the clutter - that's life). This is a big no-no. Not that I am foolish enough to believe that they never go where they aren't supposed to, but to be so bold as to just be lying on the table when I'm around... tsk tsk.

I am still rushing about, trying to get ready for the gatherings. I did some more "baking" (these cookies don't really qualify as they don't spend any time in the oven). They are chow mein noodle cookies, or as son calls them, 'spiders'. Do you make these? 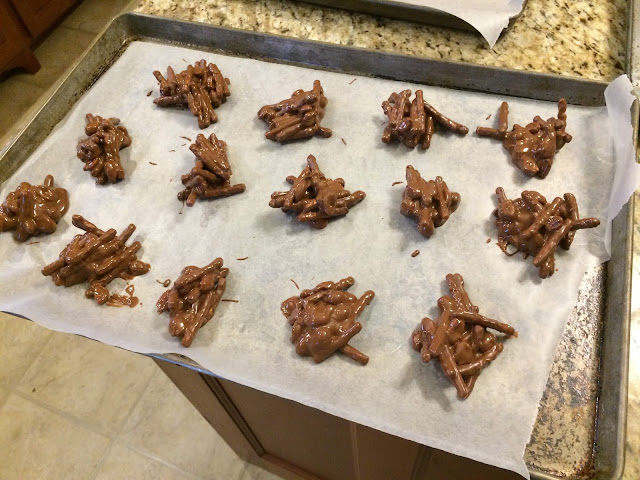 I have lists upon lists of things to do. I have always been a list maker. I have lots to keep track of. Some of the items on my list read, "put away boxes / stuff from front hall", "bake Christmas crack / marshmallow things / choc. cookies", "quick Swiffer upstairs", "wrap presents", "flies in kitchen lights"...