My husband and daughter came back to the house far too long after they left to quickly go into town and get the few things I needed for the Thanksgiving food tomorrow and Sunday. One of those things was a proper trifle bowl. None to be found. Not one in Walmart or Canadian Tire, and Home Hardware was closed. Once again, I remind you I live in "small town Ontario". No HomeSense, no Costco, no Pier One, no Stokes... the list goes on and on.

Because they felt badly about not being able to locate a trifle bowl, they chose a little something for me. It was a nice little surprise. I LOVE red in the kitchen and I have always loved little jugs and creamers. 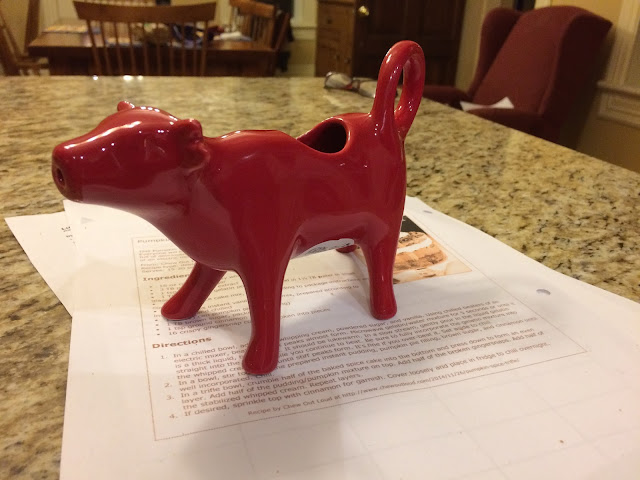 Well let's just say I'm more of a realist. I'm kind of like the anti-Martha Stewart. In fact, I was really ticked at Martha Stewart for a long time. She just rubbed me the wrong way with her perfection and chickens with blue eggs or green or whatever colour they were, her perfect décor and the way all of her food always worked out perfectly due to the magic of television and magazines. She set women up to be the perfect everything. Just got home from a long day at work and Susie is puking down the front of her shirt and the dog has fleas? No problem, just whip up the perfect meal complete with homemade dessert and relax in your New England paradise. She created an unachievable standard which made women feel inadequate by not being able to reach it.

Here's the thing. My food is not very pretty most of the time. Some of my dishes have chips in them. It wasn't until two years ago that I finally got some decent cutlery instead of the stuff my mother collected in a promotion at the local grocery store. My pie crusts are sometimes purchased frozen in a flat box, and sometimes homemade. The homemade ones often have patches where the crust split, or wasn't quite big enough on one side, so I took some of the extra that got cut off around the outside and used it to make up the difference. I don't LOVE making lunch in the morning at 7:00 a.m. and I sometimes swear at the cat when it "sproings" on the window screen just as I am getting all the ingredients out to make a low calorie bagged salad with pre-cooked chicken strips. I drink a glass of wine on Tuesdays, not waiting for Friday, if Tuesday laid me out flat exhausted because sometimes work sucks. Some of my furniture matches, but not all of it and our livingroom looks like a furniture warehouse or display floor because we are stuck with the mother-in-laws furniture and have no where to put it all and god help us if we ever decide to sell this place because there are so many unfinished bits and the thought of packing up our lives makes me feel ill, not like we are thinking of immediately selling, but we'll have to downsize one day.

So, to go along with this theme of anti-perfection, here are the preparations for the food that will go to "the city" with us to my brother and sister-in-law's house. I offered up dessert. My brother said they already had a pie in the freezer, so I said I would bring something that "wasn't a pie". So naturally, I looked on Pinterest. I have this HORRIBLE habit of experimenting with recipes that I haven't already tried when we have company over, or when I'm taking food somewhere else. It doesn't always go well. You would think I'd learn.

I found a recipe for a pumpkin trifle. Lovely autumnal flavours, but not pie. I also decided to bring something that I had already made once, so would likely be successful: Lunch Lady Brownies. These are also from Pinterest. Not particulary Thanksgiving-y but will go over well, if the aforementioned trifle is a bust.

Here is the reality of going to work all day, staying after work to get a bunch of stuff done, getting home to immediately thaw some hamburger and making a quick spaghetti supper whilst throwing in some laundry of clothes we might want to wear to the family gathering tomorrow. At the same time, husband and son had gathered up a rental car because the insurance company has deemed the "kids' car" a write off after being smashed into in a highschool parking lot by a young lady who perhaps needs more practise driving. 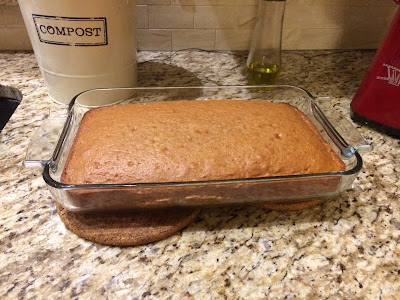 The trifle was described as easy and delicious. I beg to differ with the 'easy' description. First you have to bake a whole separate dessert - a spice cake. It does come from a boxed mix, so that's not terribly bad. Here it is posing in front of my dollar store compost container which gets used every single day and is hideous inside. 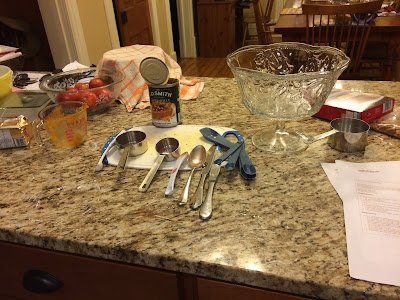 Here's my work space part way through the process. Notice the not-quite-a-trifle-bowl. I used to use that as a fruit bowl. It'll have to do. You can see my computer print outs of my recipes I was making tonight. I didn't quite get the reading glasses in the shot. Not being able to see properly anymore is a royal pain in the arse, as my baking consists of putting on the glasses, reading the next step in the recipe, taking the glasses off because they make me kind of nauseous if I'm just looking at the world normally, putting the glasses back on because I forgot what the instructions said to do, shifting the glasses down my nose because it bugs me to keep taking them off, pushing them back into place to read the next instruction, taking them off again because it's like swimming through water every time I have to go to the fridge, putting them on... 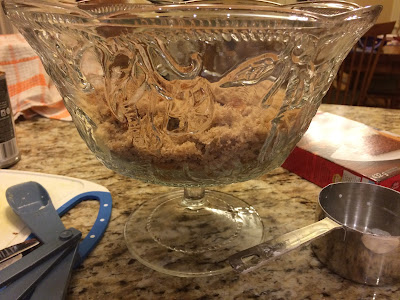 After the spice cake is baked, you cut it up and rip it apart and making a layer at the bottom of your not-a-trifle-bowl. In retrospect, that layer was too thick. 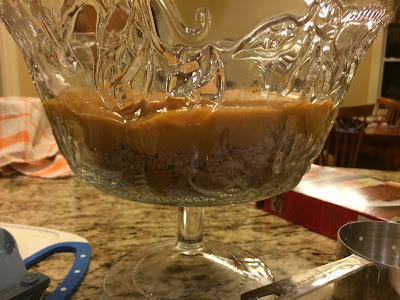 The next layer is a combination of pumpkin pie filling mixed with vanilla instant pudding (which I also had to make before hand and chill in the fridge), and a little brown sugar and something else that I can't remember because I'm 51 and a little tired. 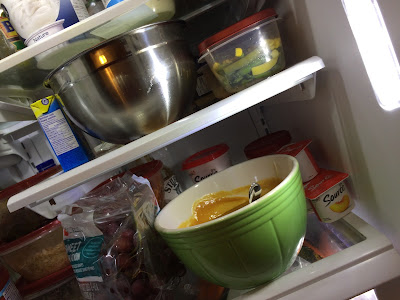 Here's the pumpkin filling / pudding mixture in my beautiful and well organized fridge underneath the chilling bowl of "stabilized" whipped cream which meant doing the whipping cream thing until you get soft peaks, then using some dissolved gelatin whilst beating the whipped cream to achieve stiff peaks. (How many steps are we at now?) 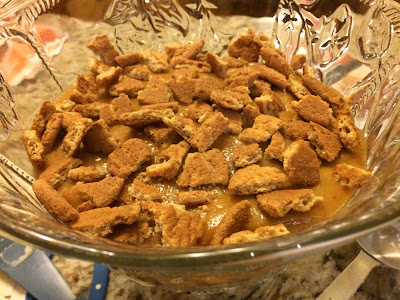 Next comes a layer of broken (on purpose) ginger cookies. They are these... 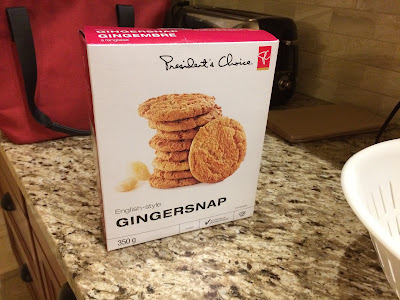 President's Choice English style Gingersnaps which pack a bit of a punch that lingers. 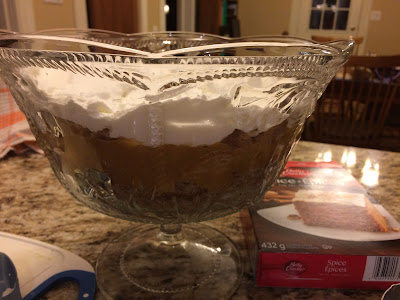 Next comes the whipped cream. Then repeat the whole process again. 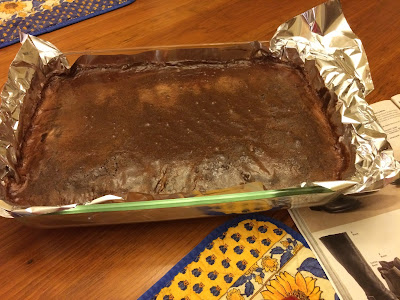 Meanwhile, I had already made a pan of brownies (tonight - between making supper and making the multi-step trifle) and then iced them right after they came out of the oven so the icing would melt and flow over the top, to harden again as it sits on my table next to the L.L. Bean catalogue with the Chelsea boots that I really want to order, but the exchange rate from American to Canadian makes them rather expensive but I love the look of them and all the other ones I've seen on line have been more expensive and did I mention I live in small town Ontario and there isn't a decent Chelsea boot within a 200 km radius?

But I digress. I realized I hadn't even taken a picture of the finished trifle product so how do you like this one? 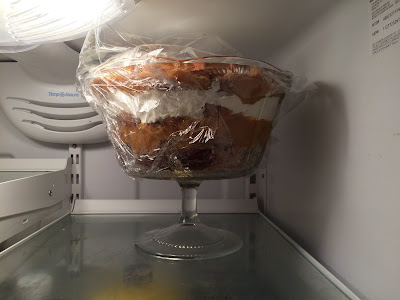 There it is with plastic wrap, all tucked up in our 2nd fridge out in the mudroom, which is perhaps one of the best things in my life. Do you have a second fridge? It makes summer watermelons and beer so much more convenient, and it is indispensable at Christmas (and Thanksgiving and Easter and staff parties ...).

Finally, after hanging my freshly laundered pants and shirt on my lovely newish drying rack, and unloading and reloading the dishwasher, handwashing the big cumbersome stuff, and wiping down the counters, I did this. 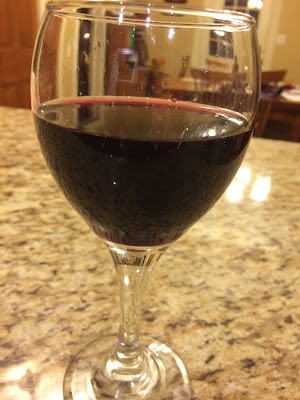 Then I sat down and wrote this blog post. Just a regular blog. A trifling blog.