Today is my first official day of holidays. Finishing the school year on a computer, instead of getting together with my colleagues for a well deserved gathering in someone's back yard, was anti-climactic and felt very "off". A tradition that we teachers and other staff members have at our school, and have always had, is gathering at the front of the school around the bus loop and waving off the kids as they walk to their homes, or pull away in school buses. The bus drivers always get into it, sometimes decorating the inside of their bus, or at the very least honking their horns as they leave. The kids wave and shout goodbyes and it's a great tradition.
A colleague, who knows how much I love "waving off the buses" made a little video for me. She had cut outs of all of the staff (again, produced on the app called Bitmoji) and a little play school bus which was being pulled slowly by a thin wire, or fishing line, or something that was barely visible.  The staff cut outs were all lined up, and as the little bus rolled past everyone, the quintessential song, "School's Out" by Alice Cooper was playing. It made me laugh and cry at the same time.
Today was a grocery day, and picking up a few things needed by my mother-in-law who is in a long term care home, but is safe and well taken care of. We can drop off a package, then it sits for a certain amount of time, and then delivered to her.
I am quite bothered by how expensive groceries are. I'm not sure how much is because of the lack of workers, in areas such as harvesting and processing, or is it just price gouging? Meat in particular is something for which there are no bargains to be had! We are back to having four of us around the supper table so larger quantities are necessary. I really tried to pinch the pennies this time, but it's hard. I couldn't imagine if someone was buying for an even bigger family.
I was thrilled to find cherries, however and boy, are they perfect right now! They are so sweet and juicy. 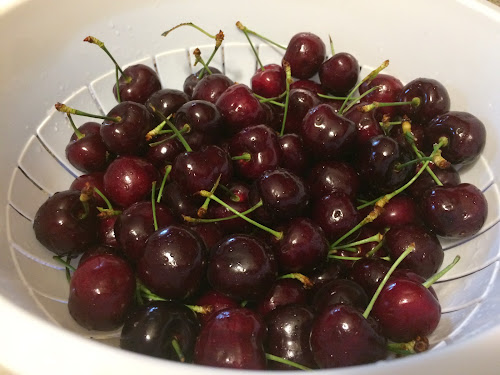 Back home, I decided I had to do something with all that rhubarb. I looked up a recipe in the recipe book from our little village's 150 year Homecoming . I found this one: 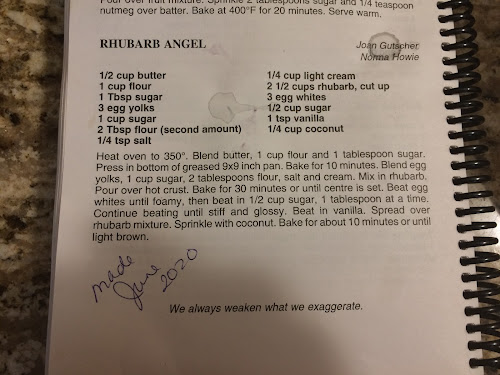 Do you write in your recipe books? I often do. I used to ask everyone to rate the outcomes on a scale of one to ten and then I would put the ratings in the recipe book. From back in my Weight Watcher's days, I have the number of points written beside some recipes. I also have calories per serving written on some. Or just a message like, "really good!" or "don't bother making this again", or "needs more time to bake".
This one turned out really good, but the "custard didn't set up as much as I would have liked. It was still delicious. Husband and I had second helpings! 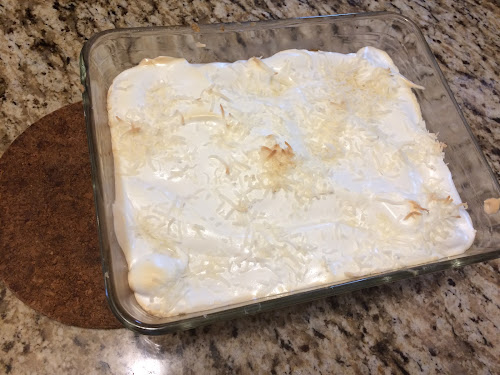 I realize that picture is not a great advertisement for this dessert, but underneath that meringue with coconut on top, is rhubarb in custardy goodness atop a pressed crust that's a bit like a sugar cookie. Trust me on this.
After supper it rained - big fat rain - for several minutes, then stopped. With heat tomorrow, there will be a jungle of plants - wanted and unwanted - to contend with. It's a great year for my perennials, but as discussed in a previous post, not so much for some of my vegetables.
I'm so happy to discover that Netflix (Canadian version) has the next season of Marcella on now. I watched a few episodes today in between baking and other things. I don't know if you know it - it is British and hugely suspenseful and sometimes a bit graphic / violent. That's when I have the pillow up to my face, or I watch between my fingers in front of my face. Anyone else do that? Regardless it is a fantastic programme and not one where you can predict what is going to happen.
Posted by coffeeontheporchwithme at 6/27/2020 09:24:00 pm