New Favourite Salad Ingredients or Save Me From a Boring Salad

I grew up with boring salads. I honestly remember leaf lettuce from the garden, diced white onion, and some sort of "cream" dressing. It was probably made from cream, a little bit of sugar, maybe a bit of vinegar. I ate it, because that's what you did.

Then I became a bit "obsessed" (lord, that's an overused word out there) with Caesar salads. It was THE THING to order from the menu. In fact, I would just have a large Caesar salad, nothing else. But it had to have real bacon on it (what are those nasty little nuggets of fake bacon??), big "homemade" croutons, a good dressing... I got into making my own, rubbing the inside of the bowl with a cut clove of garlic, washing the individual leaves of the fresh (i.e. not packaged in threes, plastic wrapped romaine hearts) romaine lettuce and getting out my little salad spinner, centrifugal forcing the water out of them like mad. When I was all worried about fat and calories, I used turkey bacon instead of real bacon (ridiculous). I might even have purchased anchovy paste for the dressing. This was back in university days, early 20's, thinking I was all chef-like and special.

But mostly, salads were tossed salads with the same old boring ingredients: lettuce, cucumber, peppers, onion, and if life was really exciting, some grated cheese. Open up one of the sixteen different bottles of salad dressing (and hope it wasn't one of the expired ones), and there you go - salad.

I also came from the era of the jello salad. Now how those could be called salads is beyond me. My Aunt Lois was the queen of the jello salad and a summer family gathering had to feature one of her famous salads. Think orange jello with grated carrot. (Uncle Ed in white undershirt and socks with sandals, husband of the Aunt Lois, would also come with a giant roasting pan filled with cabbage rolls - now THAT was memorable!!)

Where am I going with all of this? Well, here is my lettuce now: 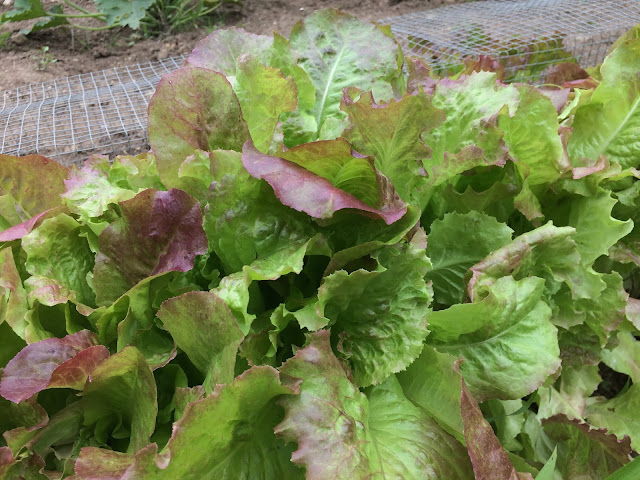 It's doing quite well, and with frequent watering, should continue for a while. I've planted another little row, which hopefully will keep us in lettuce into August. Pretty as heck, but again, boring.

So... here's my suggestion for jazzing up boring old lettuce. 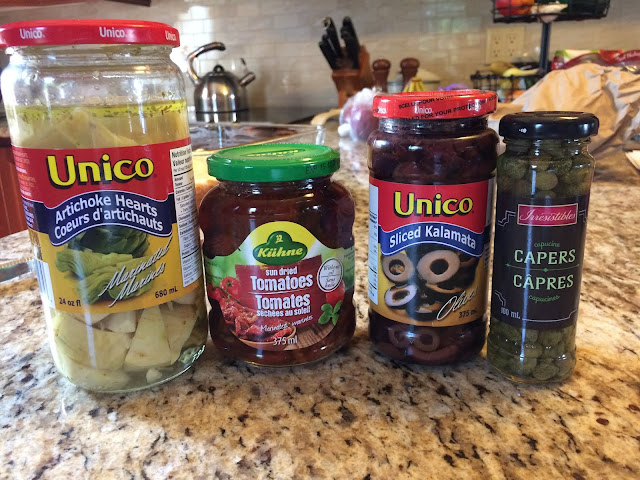 Nope, not a sponsored post (but again, Unico, etc. anytime you want to advance me some money...). Marinated artichoke hearts (I cut them up a bit), marinated sun dried tomatoes, Kalamata olives, and capers. I don't even know what capers are! Are they a seed, a bud, what plant do they even come from? Throw a few of any of these in with your lettuce, maybe crumble up some feta as well, how 'bout some red onion, slices of peppers, and maybe some Greek dressing, and BOOM!   Flavour.

These ingredients are also great with a cold pasta based salad as well (think orzo, or fusilli), or even great tossed with plain, hot spaghetti and a little pesto.

And for those of you wondering what I do with all those eggs (from the previous post)? Last night was a sausage and cheese frittata (uses up eight eggs!). 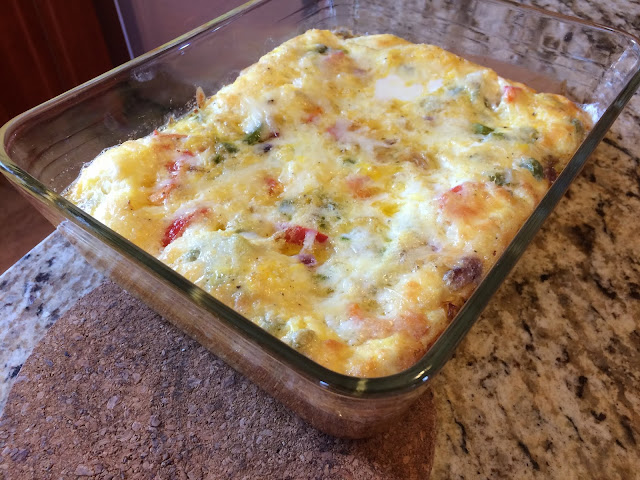