My baby girl turned 23. We had a wonderful time celebrating her birthday. She wanted to go out to eat somewhere, and as she is the social media, tourism, knower of all things interesting, we asked her to decide where she wanted to go. She thought Cowbell Brewery would be fun. This is a fairly new place that features its own craft brewery on site and has a large restaurant. When reservations were first made, they were so booked up that we had to have an 8:30 p.m. time. That's pretty late for a Friday night, when I figured I'd be ready to fall asleep within a couple of hours of that, and then they called back as they had a cancellation, so we were able to have an earlier time. At first, son was booked to work, but he was able to switch, so he was available to join us as well.

Cowbell is about an hour away from us, so we had to start out ahead of time. The food is fantastic there! They have their own wood fired pizza oven, so their pizzas are amazing. Four of us had pizzas and daughter had a lamb burger. Of course, the big thing there is their own beer with all kinds of inventive names. I had a glass of Absent Landlord. The three "kids" had flights (four different kinds of beer in smaller amounts, so you can try a variety and see what you like), and husband had a dark beer called Fly Girl. 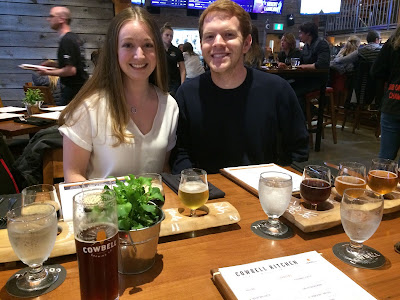 Daughter and boyfriend. You can see their flights in front of them in nifty rustic wooden holders. They write the names of the beer on the wood. 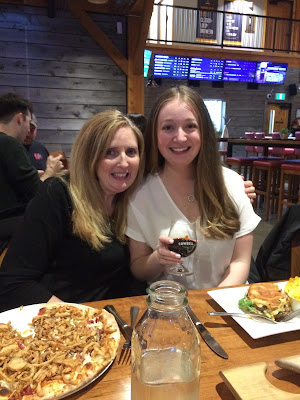 Mother and daughter. That is my "Absent Landlord" pizza with pulled pork and crispy onions on it. I brought half of it home with me. 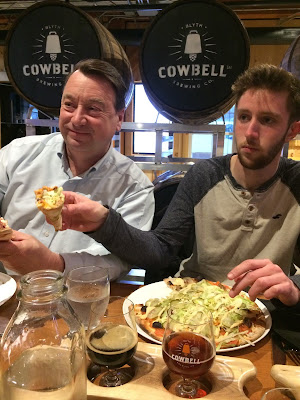 Father and son. Son's pizza was like a cheese burger. Husband had the meat lovers (predictably! ). We had lots of laughs and daughter and boyfriend ran into a couple of friends and associates. We amused and maybe shocked daughter with stories of the day and event of her birth. Husband told her how she was such a conehead baby when he first saw her that he was afraid there was something wrong with her! As you can tell, her head went back to a normal shape. We also told her how husband was in such a fluster that day, that he ran out of gas when driving home from the hospital and had to walk to a gas station to get gas. (Good thing it didn't happen on the way to the hospital!)

The facilities are amazing. We've toured a brewery before, but not this one. You can see much of it from the restaurant, and the rest you can take a self-guided, or guided tour of. 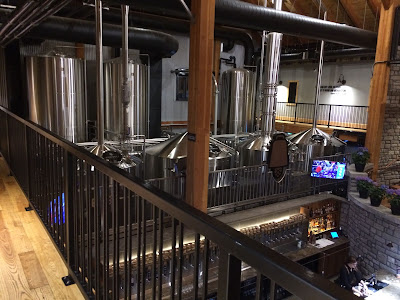 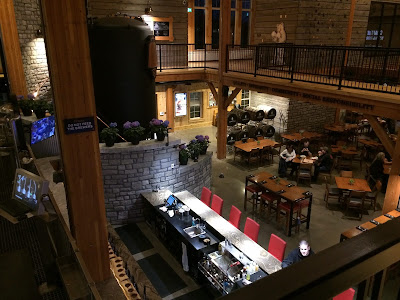 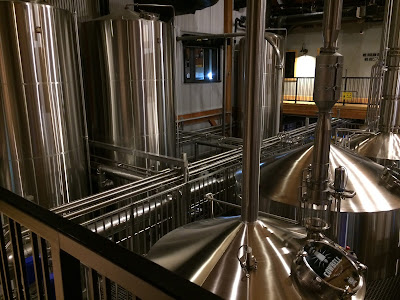 They surprised daughter with a birthday desert which she shared with all of us, because the standard chocolate birthday cake was waiting at home for later. We were absolutely stuffed!

When we got home quite a bit later, it was time for cake. 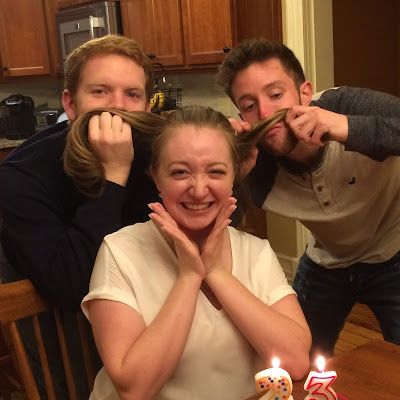 Try as I might to get a "nice" picture, this is as close as I got.

Not to be forgotten, we pulled up the chair and Samson took his rightful place. 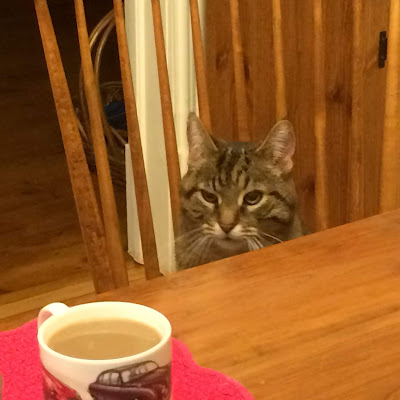 He did not partake in cake. He was expecting some kind of handout.

Today (May 4, yes, May the fourth be with you...), is supposed to be much nicer weather than the rainy cold crud we've been having. I'm in desperate need to outdoor yardwork time. So many things to cut back, clear up, weed, and dig. Hope you all have a good weekend as well!
Posted by coffeeontheporchwithme at 5/04/2019 09:59:00 am